By Tech-smart (self media writer) | 3 months ago 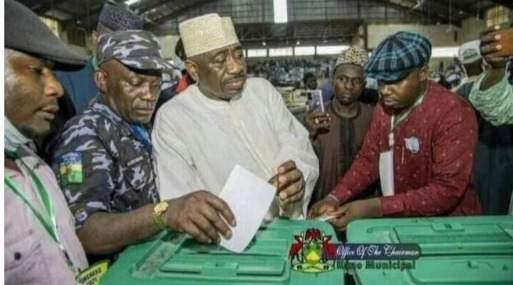 The Nigeria Police Force (NPF) has ordered an investigation on a police officer whose photos were circulating on social media casting votes in the APC Kano congress election.

Photos circulating on social media show the official standing next to Abdullahi Abbas, the newly elected APC president in Ganduje.

In a statement, Zone One police spokesperson in Kano, Abubakar Zayyanu, said the deputy superintendent of police in charge of Zone One, AIG Abubakar Sadiq Bello had ordered the search of the policeman.

According to AIG what the police officer is perceived to be doing violates the code of conduct.

The issue has sparked controversy on social media, with people commenting on the work of security forces and their political affiliation.

The police constable identified as Bashir Mohammed was reportedly working at the Kano State Government House, where he was then deployed to work with the APC Kano chairman. 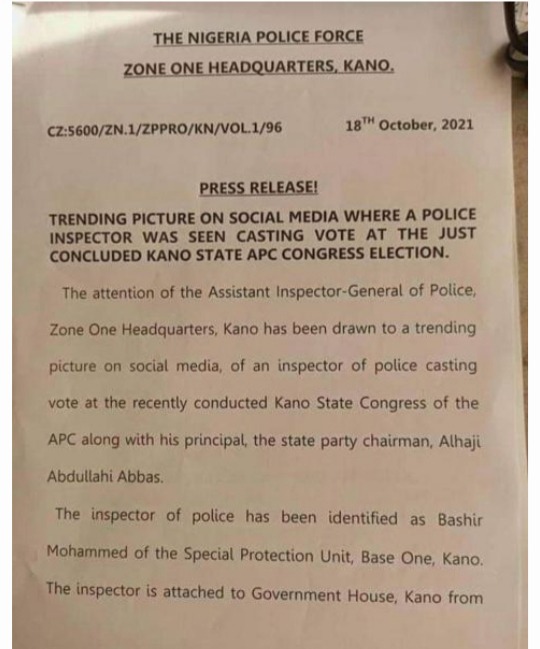 The statement added that, "The Deputy Inspector General of Police, Zone 1, Kano has been alerted to a photo circulating on social media showing a police officer casting his ballot in the APC congress in Kano and other senior politicians, and the party leader, Abdullahi Abbas ".

“The policeman has been identified as Bashir Mohammed who works in the Special Care Unit, Zone 1 in Kano.

"The policeman is working at the Kano State Government House, where he was deployed to work with Abdullahi Abas.

“Based on his alleged misconduct, AIG ordered that his report be forwarded to the zonal investigation department.

"If a police officer is found to have acted in violation of labor laws, disciplinary action will be taken against him."

The deputy inspector general informed the public that they will do whatever is necessary and the public will be informed of the action or decision made following their investigation.

Kano State is one of the states where the election of the leaders of the ruling All Progressives Congress (APC), which was held at the state level. The congress has been marred by irregularities, with various parties claiming that they are legitimate candidates.

Barrister Auwalu Abdullahi, the chairman of the APC's state executive committee sent by APC in Kano, said Abdullahi Abbas had won with 3,122 votes, making him the new chairman of the party.

However, the faction that is at loggerheads with the Kano state governor led by Senator Ibrahim Shekarau also held their congress elections in Janguza in Tofa Local Government Area of ​​the state, electing Alhaji Ahmad Haruna Zago as their party chairman.