By OmoobaAlekuwodo (self media writer) | 10 days ago

As the preparation for the 2023 General Elections intensifies, the main opposition party in the country, Peoples Democratic Party (PDP), has zoned the position of the national chairman of the party to the North. 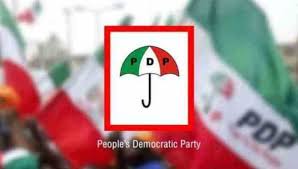 It could be recalled that some prominent members of the opposition Peoples Democratic Party (PDP) , recently, decided to convene the National Convention of the party which was slated for Friday, October 30, and Saturday, October 31, 2021.

The decision to conduct the National Convention of the opposition Peoples Democratic Party (PDP) was in response to the political conflict that was bedeviling the party at the national level, as some loyalists of Rivers State Governor Nyesom Wike agitated for the resignation or, outright, removal of erstwhile national chairman of the party, Prince Uche Secondus.

In the bid to make the conduct of the National Convention a peaceful one, some leaders of the opposition Peoples Democratic Party (PDP) decided to set up a Zoning Committee which was, ably, headed by the Executive Governor of Enugu State, Ifeanyi Ugwuanyi.

The recommendations of the Governor Ifeanyi Ugwuanyi-led Zoning Committee was, on Thursday, ratified by the National Executive Committee (NEC) of the opposition Peoples Democratic Party (PDP).

According to the recommendations of Governor Ifeanyi Ugwuanyi-led Zoning Committee which was ratified by the National Executive Committee (NEC) of Peoples Democratic Party (PDP), the National Chairmanship position of the party has been zoned to the North.

With the zoning of the national chairmanship position of Peoples Democratic Party to the northern part of the country, there is greater proximity for the next national chairman of PDP to emerge from Northwest geopolitical zone.

Northwest has only produced Acting National Chairmen of Peoples Democratic Party. They are Mohammed Haliru Bello and Ahmed Makarfi.

For fairness, equity and unity, Peoples Democratic Party may want to look toward Northwest to pick the next national chairman who will lead the party through another four years.