Governor Udom Emmanuel has advised Akwa Ibom people to be wary of unconstructive criticisms which could be hurtful to the growth and development of the state.

He made this known at a Thanksgiving Service organised by Pastor Umo Bassey Eno, Commissioner for Lands and Water Resources and Wife Pastor Patience Eno. The couple marked one year memorial of their mother, 35th marriage anniversary and appointment as a commissioner. The event was held on Saturday, at Primary School, Ikot Ekpene Udo, Nsit Ubium local government area.

The governor who frowned at the level of blackmail peddled around persons occupying public office stressed that persistent falsehood can only create enmity where none exists, and encouraged leaders to be firm while taking the right steps in their decisions.

He thanked God for the life of Pastor Eno, who God has preserved for 35 years marriage, and given the wisdom to pilot the affairs of public office as a commissioner and the legacy of his mother whom he celebrates even after her departure. 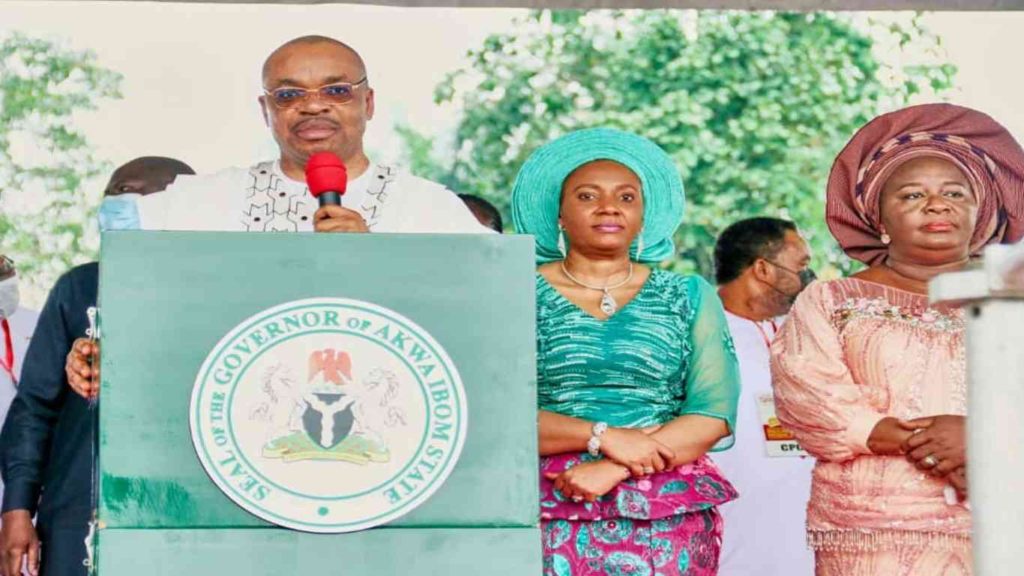 High point of the event was the cutting of the 35th marriage anniversary cake, while praises were offered to God.

The Governor noted: “Your own is to keep focus and do what you are supposed to do. As long as you are in the position of leadership, you must be blackmailed, misunderstood, misquoted and misconstrued.”

Governor Emmanuel stated that Pastor Eno’s purpose of the thanksgiving shows his gratitude to God for giving him a mother who raised him to become a successful man, spared his wife’s life and also gave him experience in office as a Commissioner.

“Sometimes last year when COVID-19 struck, you almost lost your wife, I thank God prayers were raised and today we can celebrate 35 years of marriage anniversary with your wife because she is alive. People might not know why you thanking God today as a Commissioner, especially considering your background but God raised you today you are here today,” Governor Emmanuel said.

Reflecting on God’s mercies upon their lives, Pastor Umo Eno and wife Pastor Patience expressed gratitude to God for one-year remembrance of Late Deaconess Eka Eno, mother of Pastor Umo Eno, who they said, lived a fulfilled life as a Christian, and impacted Christian virtues through her tutelage which has given him a firm background in life.

Pastor Eno also thanked God for 35 years of fruitful marriage, bonded by love and togetherness to his wife, Pastor Patience Eno, recounting the days of little beginning and the journey so far, acknowledging that God has kept them through thick and thin.

Pastor Eno particularly expressed appreciation to Governor Emmanuel for appointing him to serve the Akwa Ibom people as a Commissioner, adding that, the appointment has exposed him to public service which has added to his wealth of experience, having had a private sector background.

“Let me start by thanking God for the rare privilege He has given to us to be alive, last year we were gathered here to send my mother forth, we didn’t have so much crowd but today one year remembering her I know that in heaven she will be looking down and thanking God for all that is happening today.

“That woman meant a lot of things to us, our father left us at a very tender age, and she took up the role of a father and a mother and she made the best out of us and most of the things she taught me will leave with me till I meet her in glory.

“Today’s thanksgiving marks three important milestones in our lives, first, one year memorial of my mother Deaconess Eka Eno, second, to mark the 35th anniversary of my marriage to this daughter of Zion, the love of my life Patience, we thank God that she accepted to marry me, third, your Excellency is to thank God for my appointment as a Commissioner in your cabinet, I know I am the least qualified of all the cabinet members but I thank God you gave an opportunity to serve and for giving me space to learn, thank you for letting me understand public because my path never crossed that line,” he said.

He recounted how he nearly lost his wife to COVID-19 last year, maintaining that when the doctors have a verdict that she won’t be able to make it, God changed the narratives, adding that God used the Governor and his wife, Dr Martha Emmanuel to assist the family greatly to overcome that challenge.