By Bootstrap (self media writer) | 3 years ago 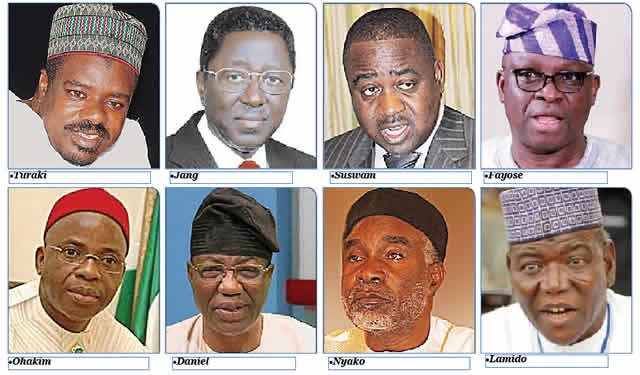 The conviction of former Governor Orji Kalu of Abia State for fraud to the tune of N7.6bn has boosted the morale of Nigeria’s anti-corruption agencies, especially that of the Economic and Financial Crimes Commission.

Kalu’s case, which lasted in court for 12 years, came to a dramatic end a few days ago with Justice Mohammed Idris sentencing him to 12 years in prison.

Legal luminaries opine that the case was able to move on without hindrances from 2015 to 2019 because of the Administration of Criminal Justice Act that was signed into law by former President Goodluck Jonathan.

In a nutshell, the ACJA makes it difficult for parties in a criminal case to unnecessarily delay the court proceedings as was done through preliminary objections and interlocutory appeals in the past.

Since the signing of the ACJA into law, four former governors have been convicted in the last four years. They include: Bala Ngilari of Adamawa State, whose conviction was later upturned by the Court of Appeal; former Governor Jolly Nyame of Taraba State; ex-Governor Joshua Dariye of Plateau State and Kalu.

There is, however, a long list of former governors who may end up behind bars.

Lamido, who was governor of Jigawa state from 2007 to 2015, is currently standing trial with two of his sons – Aminu and Mustapha – before a Federal High Court in Abuja for alleged N1.35bn fraud.

The commission said on April 18, 2008, two cheques to the tune of N14, 079,595 and N10, 377,310 respectively were transferred in favour of a company, Speeds International in which Lamido is signatory. The exhibits have been tendered in court.

Justice Ijeoma Ojukwu has adjourned the matter till February 18, 19 and 20, 2020, for continuation of trial.

Nyako was Governor of Adamawa State from 2007 until his impeachment in 2014. He is also a former Chief of Naval Staff and ex-military administrator of Niger State.

Married to Justice Binta Nyako of a Federal High Court in Abuja, Nyako and eight others, including his son, Senator Abdul-Aziz Nyako, are facing 37 counts of criminal conspiracy, stealing, abuse of office and money laundering preferred against them by the EFCC

Five companies that allegedly served as conduit for the alleged diversion of the funds were equally charged.

They are facing trial before Justice Okon Abang for alleged money laundering to the tune of N29bn.

The EFCC had on November 5, 2019, called its last witness, Mr. Kobis, who testified via a video link from London.

Fayose was governor of Ekiti State from 2003 until his impeachment in 2006. He subsequently came under investigation by the EFCC and was charged before a Federal High Court for allegedly diverting N860m meant for poultry projects.

While the matter was still ongoing, Fayose again won election as the governor in 2014 which conferred on him immunity from prosecution.

However, on the day his tenure ended on October 16, 2018, he was again arrested by the EFCC for allegedly receiving N6.9bn from a former Minister of State for Defence, Musiliu Obanikoro, during the run-up to the 2014 governorship election.

The sum was said to have emanated from the account of the Office of the National Security Adviser under the leadership of Col. Sambo Dasuki (retd.).

The EFCC arraigned Fayose and his companies before Justice Chukwujekwu Aneke of the Federal High Court sitting in Lagos on 11 counts bordering on money laundering and stealing to the tune of N6.9bn.

Turaki was Governor of Jigawa State from 1999 to 2007. The EFCC accused the former governor of fraud to the tune of N36bn and levelled 32 charges against him before a Dutse, Jigawa State Division of the Federal High Court, in 2011.

He was, however, re-arraigned alongside three companies before Justice Nnamdi Dimgba of a Federal High Court sitting in Abuja in 2017.

Jang, who is a former Governor of Plateau State and ex-senator, is facing trial for alleged fraud to the tune of N6.3bn.

The former governor is standing trial before Justice Daniel Longji of Plateau State High Court alongside a former cashier in the office of the Secretary to the State Government, Mr Yusuf Pam.

The EFCC slammed 12 counts bordering on misappropriation of funds.

At the last hearing on November 4, 2019, an EFCC witness, Musa Sunday, narrated to the court how a cashier at the Plateau State Government House delivered the sum of N750m to Jang while he was governor.

Aliyu was governor of Niger State from 2007 to 2015 on the platform of the Peoples Democratic Party.

Aliyu, who preferred to be called the ‘chief servant’ of Niger State during his time as governor, is facing trial for alleged N2bn fraud.

The former governor is being prosecuted before Justice Mikailu Abdullahi of a Niger State High Court by the EFCC along with his then Chief of Staff, Umar Nasko, and the Chairman of the PDP in Niger State, Tanko Beji, on seven counts bordering on criminal breach of trust.

Suswam was Governor of Benue State from 2007 to 2015. The former governor is standing trial alongside his Commissioner for Finance, Omadachi Oklobi; on N3.1bn money laundering charges.

Suswam, who is now the senator representing Benue North East, and his co-defendant, are facing nine counts before Justice Okon Abang of the Federal High Court in Abuja.

The former governor was first arraigned in 2015 before Justice Ahmed Mohammed in the same Abuja division of the court but Justice Mohammed withdrew from the case in July 2019 following a Sahara Reporter’s story accusing him of unethical practices in respect of the case.

Suswam and his ex-commissioner were subsequently re-arraigned before Justice Abang on September 30, 2019. Trial began on October 29.

A former governor of Ogun State, Daniel is currently standing trial for alleged fraud to the tune of N200m before Justice Olarenwaju Mabekoje of the Ogun State High Court sitting in Abeokuta, Ogun State.

Daniel, who was governor from 2003 to 2011, was arraigned in October 2011 on 16 counts bordering on stealing and misappropriation of funds.

In 2012, a key EFCC witness, Adeluola Babatunde, a Business Manager with Skye Bank (now Polaris Bank), told the court that Daniel wanted to kill him and he had been sending threat messages to him, an allegation which the court ordered the police to investigate.

Daniel had his no case submission dismissed by the judge on May 17, 2019 with the judge asking him to open his defence.

The former governor was first arraigned before Justice Moshood Abass on October 11, 2011.

He is standing trial along with his then Commissioner for Local Government and Chieftaincy Matters, Hosea Agboola, and an Ibadan-based businessman, Femi Babalola for 11 counts preferred against them by the EFCC.

The charge against them borders on “conspiracy, awarding contract without budgetary provision, obtaining by false pretence, acquiring property with money derived from an illegal act and concealing the ownership of such property”.

Alao-Akala is alleged to have awarded a road contract worth about N8.5bn between 2007 and 2009 without budgetary provision, to Pentagon Engineering Services, a company traced to Babalola.

The said contract was executed on behalf of the 33 local governments in the state.

Ohakim, who was Governor of Imo State from 2007 to 2011, is standing trial before Justice Babatunde Quadri of a Federal High Court sitting in Abuja.

He was first arraigned on July 8, 2015 before Justice Adeniyi Ademola. However, with the compulsory retirement of Justice Ademola, by the National Judicial Council, the case started de novo before Justice Quadri.

The EFCC slammed three charges against Ohakim, accusing him of purchasing a parcel of land at 60 Kwame Nkrumah Street, Asokoro, Abuja, with $2.2m in contravention of the Money Laundering (Prohibition) Act.

Content created and supplied by: Bootstrap (via Opera News )