From Abuja To Abeokuta, Is Okorocha Seeking For Intervention Over Rift With Uzodimma?

By INNONEWS (self meida writer) | 1 months 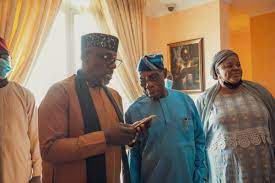 Former Governor of Imo State and Senator Representing Imo West Senatorial District, Rochas Okorocha, has lately been visiting prominent Nigerians, after the Imo State government had vowed to continue with the implementation of the Judicial Panel of Inquiry on Lands and other Related Matters.

The Panel set up by former Governor Emeka Ihedioha had recommended forfeiture, demolition and seizure of properties and lands unlawfully cornered by the former Governor, his friends, associates and family members when he was governor of Imo State.

Okorocha had unsealed Royal Palm Estate, a property linked to his wife after the estate was sealed by the state government in line with the recommendation of the panel.

The Police arrested the former Governor for unsealing a government property. He was later released, while some of his aides were arraigned in court and released on bail.

Since then, the spat between Governor Uzodimma and Senator Okorocha has accentuated to an unprecedented level. Uzodimma has restated his commitment to recover all government assets in Okorocha’s hands.

He told APC stakeholders in Owerri recently, that there is no going back in carrying out the task.

He said “As a government, we will use all legal means to recover every Imo property or wealth wrongly appropriated by anyone, Okorocha inclusive. This is my covenant with Imo people and I intend to keep it to the letter.

“The restoration of Owerri Master Plans means that those who abused the processes would be punished. Those who took land from the government and private individuals would be forced to return them. In short, all looted assets of Imo people must be recovered and Imo State must be for all Imo people” Uzodimma told the gathering.

Since the feud with Uzodimma began, Okorocha has visited some prominent Nigerians such as Vice President Yemi Osinbajo and former President Olusegun Obasanjo.

“The whole thing to me sounds like a joke to me, a dream that does not reflect any practical reality, but I m a father, I m a leader of that State and I am trying to make sure things don’t escalate beyond control” Okorocha told journalists after a meeting with the Vice President at the Presidential Villa, Abuja.

Okorocha later proceeded to Abeokuta,Ogun State capital to see President Olusegun Obasanjo. He said on his verified twitter handle that it was important to consult the elder statesman with the aim of advancing the nation.

Okorocha had admitted that he will run for President in 2023 and he will win.But observers say the sudden consultations by the former Governor with some prominent Nigerians may be connected to his recent spat with Uzodimma.

A former Commissioner in Okorocha’s government, TOE Ekechi however advised Uzodimma to resist any negotiation with the former Governor.

Opinion: Do These Three Thing To Protect Your Marriage From Crashing

Diabetic Leg Amputation: Read How to Manage Yourself In Order to Avoid Losing Your Legs