Nigerians expose Aisha Yesufu as a PDP member, labels her a hypocrite

Nigerians have exposed Aisha Yesufu as a member of the opposition, Peoples Democratic Party (PDP) as tweets in 2015 gave her away. 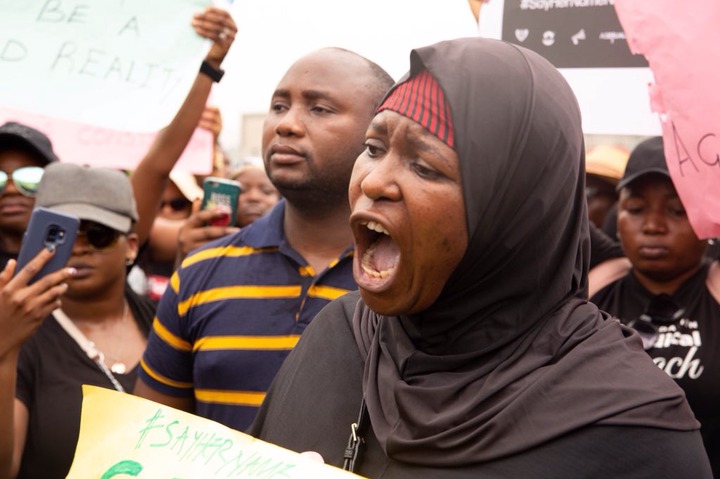 The Bring Back Our Girls campaigner was also described as a hypocrite because of her double-speak history, most which were captured in her previous posts on Twitter.

Yesufu who is known for her constant criticism of the Buhari administration voted for former President Goodluck Jonathan and his Vice President, Architect Namadi Sambo in the 2015 election but the duo lost to Muhammadu Buhari and Yemi Osinbajo.

In one of her tweets in 2015, she said "@elrufai. My legs are aching. My back aching. Stood 12 hours to vote for Namadi Sambo, he must not try anyhow else, he will see anyhow. No to impunity”.

Since her candidates lost, Yesufu has been attacking the Buhari administration often targeting them in her tweets.

However, on Tuesday, some Nigerians took to Twitter to expose Aisha Yesufu. According to them, her husband stole money from the National Health Insurance Scheme (NHIS) then fled Nigeria for Scotland.

They also claimed that her children are studying in Scotland and not in Nigeria yet she claims she is showing solidarity to undergraduates caught up in the ASUU strike.

A twitter user, Austine Abel reveals how Aisha Yesusfu’s husband was fired for stealing money belonging to NHIS, "In September 2020, it was revealed that Bring Back Our Girls campaigner’s husband, Aliu stole seven vehicles and money belonging to the National Health Insurance Scheme (NHIS) yet she's online calling other people names”.

In a similar tweet, Hayden Jones narrated how her husband fled abroad when EFCC was looking for him, "Her husband fled Nigeria to Scotland when @officialEFCC was going to arrest him. And she is talking corruption? #AishaTheHypocrite has no shame, if they born her husband well, he should come home.

A twitter user, Olaoye said she is being paid to slander the Vice president, "The hypocrisy of Aisha Yesufu is not hidden at all, when she was in her right senses she saw the good Osinbajo was doing now that someone is paying her she is saying another thing”.

Another user, Mz Temmy called her out for her double standard display. "Aisha is a hypocrite, sometimes back she praised the VP and said Buhari should remain in London because Osinbajo is doing well now you want to come and badmouth the VP again, that won't work”.

In another similar tweet, Mustaphaolatu19 expressed sadness towards her hypocritical character and recommends an immediate medical help for her mental instability, "Aisha Yesufu is a two facet double standard human being. She's a plague we need to cast out, a threat to human sanity. She needs mental support; she's very unstable and a threat to her immediate family. A GoFundMe should be raised for her”.

Bantaqueen cautions her about her nonstop slander against the Vice President which she refers to as boring, "Dear Aisha Yesufu, stop being a hypocrite! You talk from both sides of your mouth. Your constant negativity about the Vice President is getting boring. Please mention one Nigerian VP that has done half of what Osinbajo has done! I’ll wait”.

Content created and supplied by: Amazing2020 (via Opera News )