Nigerians are sincerely fed up about all the corrupt people who are being put into power, as an NDDC Managing Director had fainted on Live TV after being probe by the house of Representative committee about the millions of naira allocated to him during his time of attaining office. 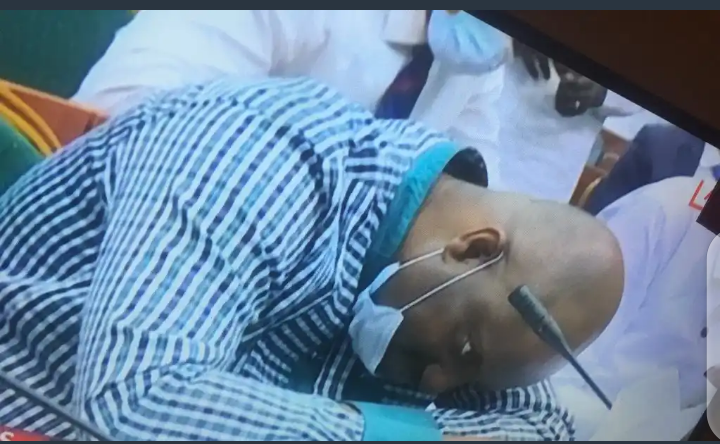 This was reported online by Sahara reporters where they had claimed he had fainted after he was being grilled by the committee to Give account on what he had use money on, many people claimed he faked fainting as he could give accounts. This isn't a new experience for Nigerians as we have encountered past politicians who had also failed to Give account of the money allocated to them when they were in office, and many of such cases are still pending in the court of law.

Nigerians had taken to Social media platforms to voice out their fears and frustration on the whole scenerio, here are some Reactions below.

@kardinalzer: my advice to all of us na make God help us make we make enough money apply for Visa and run leave this people them no value u

I will never forgive myself ..I been get visa to travel go turkey , I no gree go

I’m beginning to believe we have some comedians and clowns in positions of authority in this country.

I suspected something like this would happen when he claimed he needed a doctor last week, now this! How much more unserious can we get in this country?

All these while u are just begining to believe we have comedians. When they told u monkey swallowed money u didn't know. Or rat that pursued someone from office. There is always a drama these so called authorities try to put up when they are being required to account for funds.

Some years back, Ike Ekweremadu played dumb at a court hearing. Dino Melaye suddenly became comatose in order to evade EFCC arrest. Fayose burst into tears on national TV when he was asked to give account of his govt.

Now this one has fainted. Who is deceiving who ?

When he was stealing millions he didn’t collapse oh.......They should pour water on him, fan him and continue the questioning.

He should stop making a fool of himself.

This is a little among the hilarious comments of Nigerians which have been gathered from social media platform (Twitter) which clearly shows people dissatisfaction on how politics are being run in the country. They claimed it was all an act to evade being probe, and I see no lie in it as we are all fed up as Nigerians. Are they not paid salary? Are they not well to do? Why do they steal keep looting billions of public funds?, This are the questions Nigerians needs an urgent answers too.