By Barcanista (self meida writer) | 1 months 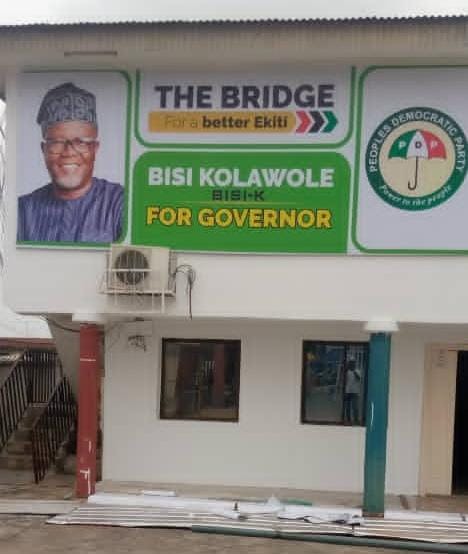 Ekiti Youth Progressive has called on the embattled Peoples Democratic Party Chairman in Ekiti state, Otunba Bisi Kolawole to step down as the party Chairman and concentrate on his governorship ambition.

Mr. Sunday Ajanaku, who represented the Chairman of the group, accused former governor Ayo Fayose of plotting to to cripple the party in the South West and Ekiti state against subsequent election.

Ajanaku said Fayose's desperation to install Bisi Kolawole, who has not shown interest in contesting for governorship, seems like a decoy to handover the party to the opposition in 2022.

'Can you imagine that Fayose has converted his Campaign office at Adebayo to Bisi Kolawole's situation room? Who is Fayose working for? This is the question in the lips of all party members why Fayose is so desperate to force BISIKAY on them", he asked.

"As we speak, Bisi Kolawole is not seen in the public meeting people to reconcile them as a Chairman, rather, Fayose is the one doing everything possible to install him against the popular demand from all party's faithful".

"The APC people are already happy for his choice because of his weakness even in his home town, Efon Ekiti. What Bisi Kolawole should be doing now is to see how worrying factions will be united to win APC in 2022", he further stated.

Ajanaku said Ekiti state will reject Bisi Kolawole governorship bid because he has no predetermined interest to govern Ekiti people.

He further accused Fayose of being the mastermind of the problems of PDP, creating divisions in the South West with his endorsement and uncontrollably attacks on Governor Seyi Makinde; who happens to be the only PDP governor in the South West.

"Ekiti is his next target. As we speak, PDP has no Chairman and the rest of the State Working Committee members are dying in silence.

Save the soul of PDP in Ekiti", he concluded

OFFICIAL: L.Messi And C.Ronaldo Become The First Players In History To Achieve This Feat In Football

Top 10 Highest Goals Scorers In The History Of Football.

Check Out How Many Years Nollywood Actor “Baba Ijesha” is Likely to Spend in Prison If Convicted.