Check Out China’s Type 81 Rifle That can Fire 15,000 Rounds Without Breaking

It was meant to be a test of the Chinese ability to develop small arms on its own.

In comparison to Russia and the United States of America, Chinese-made small arms were significantly inferior in the 1980s. The Chinese military (PLA) at the time were armed with clones of the original AK47 and the Soviet’s SKS; it was the Type 56 assault rifle and the Type 56 carbine. The PLA (People's Liberation Army), Unified organization of China's land, sea, and air forces is one of the largest military forces in the world. The People's Liberation Army traces its roots to the 1927 Nanchang Uprising of the communists against the Nationalists. 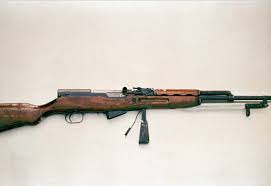 In 1960, China conducted, albeit, a failed attempt to blend the features of the Type 56 assault rifle and the Type 56 carbine. The result of that experiment was the Type 63. Type 63 assault rifle was the first domestically designed and mass produced assault rifle of Peoples republic of China. It was designed following significant ideological disagreements between PRC and USSR during 1960s, so China decided to develop its own small arms, based on the earlier licensed designs. As its name “Type 63 rifle” implies, was initially adopted by PLA in 1963. It is interesting development because it represents a mix of features taken from other designs, mostly from the Type 56 assault rifle (Kalashnikov AK) and the Type 56 carbine (Simonov SKS). It is believed that Chinese factories produced well over 1 million of Type 63 rifles before a more advanced design, the Type 81 assault rifle, was adopted to replace it. 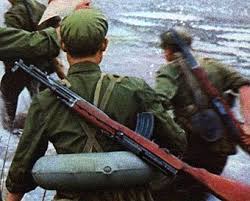 However, the Type 63 was flawed on several fronts. The weapon incorporated a rotating bolt working system from the AK-47 rifle instead of the tilting bolt system of the SKS. It was too heavy and without a pistol grip and inline stock to afford controllability in fully automatic fire. Also, the rifle was already outdated when it was introduced, in comparison to the American-made M16, and the Soviet’s AKM. China soon realized their new Type 63 is far from being a fitting rival of the Soviets or the US so they proceeded to develop a new 5.8mm caliber the rifles for it, which eventually became the QBZ-95. Not long after, China built the Type 81; a stopgap rifle to replace the failed Type 56.

The Type 81 is a Chinese-designed second-generation, selective-fire, gas-operated 7.62×39mm rifle (based on Kalashnikov and SKS actions) adopted by the Chinese People's Liberation Army (PLA) and has been in service since the mid-1980s. The Type 81 represented China’s need to test its proficiency at building fully indigenous small arms.

The weapon was introduced into PLA service in 1981 but did not become widely distributed until the late 1980s. It replaced the SKS, the Type 56 assault rifle and even the RPD machine gun (LMG version), succeeding where the Type 63 failed. Its first combat use came during the latter part of the Sino-Vietnamese border conflicts of the mid-1980s. The PLA has replaced most of its Type-81s with the Type 95 or Type 03 series of weapons, though it is still in service in the reserves and armed police. An improved version is also used by the Bangladesh Army under the designation BD-08. 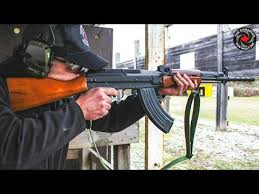 In an attempt to make the rifles more modular and adaptable, the integral folding bayonet of the Type 56s and Type 63 was scrapped in favor of a removable knife bayonet and the provision to mount an underslung grenade launcher. Also, the Type 81 used a gas system that was totally Chinese although the general layout was consistent with the Type 56 assault rifle. However, the Type 81 has a SKS-like short-stroke gas-piston design and other improvements that increased firing accuracy by reducing recoil and muzzle jump.

The most distinct feature of the Type 81 is probably the more exposed muzzle part of the barrel. Other differences of the Type 81 from the Type 56 includes the length of the action, the bayonet, the rifle stock, etc. The front sight has been moved back as a modification to be able to fire 22mm rifle grenades, which are slid over the unobstructed barrel muzzle now formed into a spigot-type rifle grenade launcher. What came out of this design is an impressive and reliable rifle capable of firing 15,000 rounds without breaking or needing replacement.

The Type 81 hit their targets more accurately and with less recoil than the standard AKs. At the end of the day, however, the Type 81 rifle was still a stopgap weapon. A stopgap is something that serves a purpose for a short time, but is replaced as soon as possible. The real target of the Peoples Liberation Army was a rifle in a new true intermediate caliber: 5.8mm. While the Chinese developed subsequent versions of the Type 81, it was eventually replaced in frontline PLA service by the QBZ-95. Still, till this day, the Type 81 has not been retired and is very likely to see service far into the twenty-first century.