Why defectors from Apga should return to the party.

By Bolwhizhub (self media writer) | 24 days ago

Victor Oye, the National Chairman of the All Progressives Grand Alliance, APGA, has stated that disgruntled members who left the party in the run-up to the November 6 Anambra State Governorship Election are free to rejoin. He spoke to The PUNCH in an exclusive interview on Wednesday, shortly after the Independent National Electoral Commission declared APGA's candidate, Chukwuma Soludo, the winner of the long-running election that ended with a supplementary poll in the state's 21st local government. 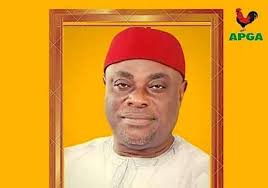 Nkem Okeke, the incumbent deputy governor of Anambra State, has also defected from the APGA to the ruling party.

"When some of them switched allegiance, they didn't believe in defection; they wanted to experiment, and now that the adventure didn't work out, they would definitely go back to where they belong," Oye said when asked for his word to the defectors.

"We have no grudges against anyone." As a political party, we are laser-focused. People will be forgiven if they make mistakes and repent. They will be reintegrated if they return with sufficient cause for reintegration. After all, it's politics, and the only thing that is constant in life is change."

Lessons learned and next steps...

Some members of APGA who defected to other political parties for personal or political reasons failed to live up to their expectations, with the party winning the state governorship election. Nonetheless, rather than being aggressive, throwing shade at the party, or becoming hostile to members of the party, they should return to the party as advised by the chairman.

The All Progressives Grand Alliance (APGA) is a Nigerian political party that has not yet established itself as one of the country's two major political parties. Returning to the party will facilitate their support for the party, allowing for its rapid growth.

Another reason is that if they provide unwavering support to the party, the party may decide to consider them for political office.

Various grievances or reasons should not be directed at the party or any of its members, but rather should motivate them to do more for the party in order to ensure its growth and development. Every political party strives to present the best candidate who can compete with the others. As a result, now is another opportunity to actively support and demonstrate excellence in the party.