Check out Why Buhari Allowed Jonathan the Use of the Presidential Jet.

The news has been boozing, of former president Goodluck Ebele Jonathan, flying to Bamako, Mali, on the presidential jet of president Muhammadu Buhari, for the Ecowas peace initiative mission to the troubled west African Country. Initially when I stumbled upon the news I thought it was a mere sensational creation of one attention-seeking blogger, until I searched in other platforms and confirmed the news. 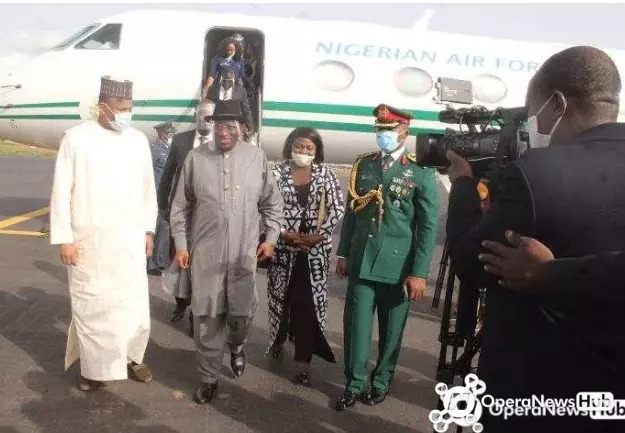 Well, like myself, you may have been left wondering why this sudden show of unusual kind gesture by the number one citizen towards his predecessor; considering the tension that existed between the two, in the run-up to the 2015 general elections.

Now, what are the possible motivations for this kind gesture by the president.

Dr Goodluck Ebele Jonathan has been playing a prominent role as head of AU election monitoring team since his voluntary concession of election victory to incumbent president, Mohammadu Buhari in 2015. He has also been involved in several regional and international peace mediation initiatives, as well as democratic advocacy through his foundation, The Goodluck Ebele foundation. Now Goodluck Ebele Jonathan's current mission is to lead other West African (ECOWAS) delegates to a peace mediation effort in troubled Mali. Nigeria, since becoming a sovereign nation has always played a leading role in this regard. Therefore Jonathan, acting in that capacity , though not directly delegated by Nigeria but by ECOWAS, could be said to be representing Nigeria, being a Nigeria citizen.

Muhammadu Buhari, who incidentally has been the chairman of ECOWAS head of states in the past, could have extended this gesture to Goodluck Ebele Jonathan out of his commitment to and belief in the ECOWAS cause and therefore

decided to aid in anyway possible to ensure success.

Nevertheless, I personally believe the gesture itself signals more than any state interest reasons that could readily apply. In the build up to the 2015 elections, tensions were at fever pitch between the camps of the All Progressive Congress that was fielding president Mohammadu Buhari, and the People's Democratic Party, fielding Dr Goodluck Ebele Jonathan. Tantrums and insults were being freely thrown. Dr Goodluck Ebele Jonathan, who was the incumbent was severely maligned and denigrated by the APC and the supporters of Buhari. Several notable members of the opposition APC used different demeaning epithets against Jonathan such as "kindergarten president", "Clueless government", etc. Several threats were even issued by prominent members of the opposition, including "to form a parallel government" should they lose the elections. But in the face of all the massive provocation, Goodluck Jonathan maintained uncommon equanimity and did not retaliate in any way nor leverage on his enormous presidential powers to harass any of his traducers. The tradition continued until even after conceding victory to the APC and their assumption of office. Goodluck was variously accused of so many financial infractions, including, according to Osibanjo, the embezzlement of over N100billion, and $289million just before the elections; an accusation that was vehemently refuted by Jonathan through his Aids, with a challenge to Osibanjo to publish proof of his allegations. He has not taken up the challenge till date, to the best of my knowledge.

It is quite clear that Jonathan has earned much respect for himself, locally and internationally through his gentlemanly approach to handling of issues, including those that touch on his personal reputation. Whatever respect and show of kind gesture Jonathan enjoys in the hands of his 'one-time' sworn enemies today is what he has rightly earned for himself, through his uncommon display of maturity and tolerance. It aptly captures the awesome power of tolerance and love over any form of aggressive confrontation of our perceived enemies. When we did not stoop low to the level of our enemies by matching them hatred for hatred, insult for insult, denigration for denigration, we leave them without the perverted satisfaction they hoped to derive from their inappriopriate behaviour, and they are humiliated. But, we will have earned their eternal respect and they would subsequently, forever deign to us.

Please your views on this article are welcome. And do kindly share with your friends.