By Timelyreport (self media writer) | 27 days ago

It is no longer news that Professor Charles Soludo has been declared winner of the recently concluded Anambra governorship election by the Independent National Electoral Commission. Soludo's victory at the polls has sparked mixed reactions from many across the country. The candidate of the All Progressives Grand Alliance (APGA), Soludo, won after securing a total of 112,229 votes, while opposition parties, the Peoples Democratic Party (PDP) and the ruling All Progressive Congress (APC), polled out 53,807 and 43,285 votes respectively.

Reacting to Soludo's victory at the much talked about election, APC Chieftain, Joe Igbokwe took to his Facebook page to congratulate his former classmate and also revealed why Soludo was brought in by former President Olusegun Obasanjo to head the Central Bank of Nigeria (CBN), during his administration.

According to Joe Igbokwe, Soludo, Obasanjo brought Soludo to head the Central Bank of Nigeria because he has a developmental orientation and has a lot to bring to the table. 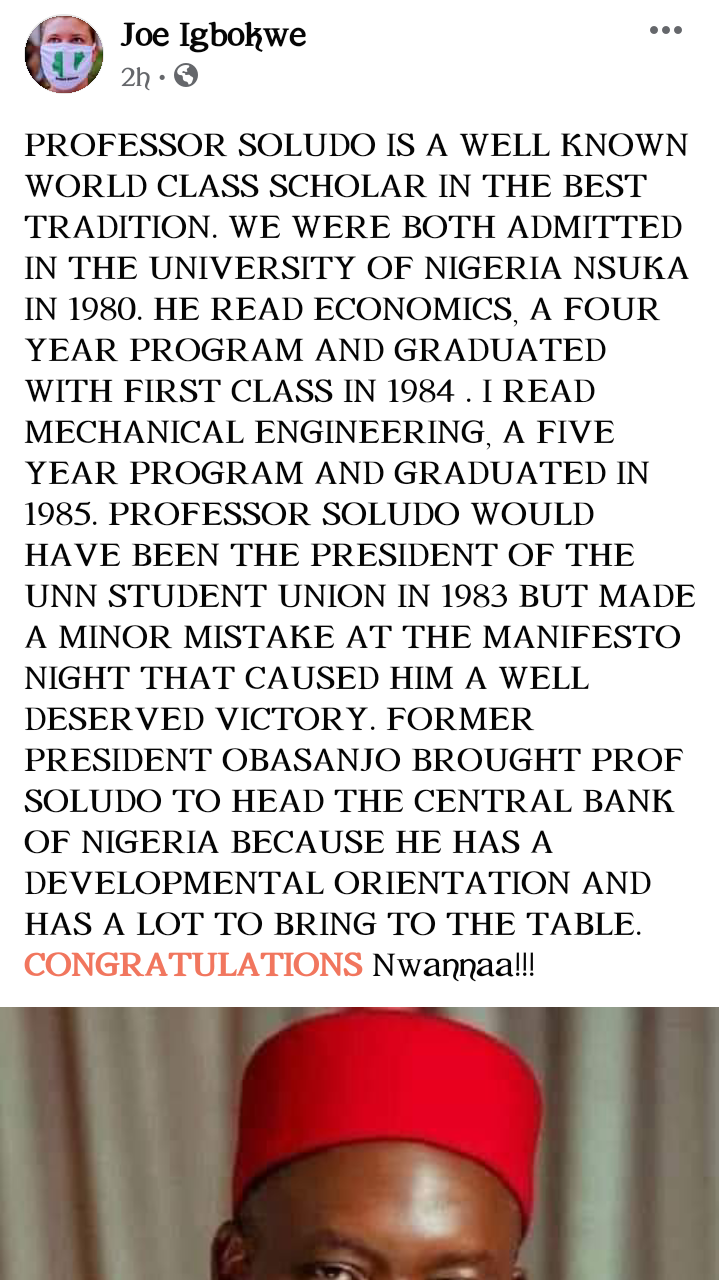 Joe Igbokwe is right with his statement about Charles Soludo. The Anambra politician has a very big and intimidating profile that makes him stand out among his peers. The economics professor had in time past, worked as a consultant for several international organizations, including The World Bank, the United Nations Economic Commission for Africa, and the United Nations Development Programme.

Recall that before his May 2004 appointment to the bank chairmanship, Soludo held the positions of Chief Economic Adviser to former President Obasanjo and Chief Executive of the National Planning Commission of Nigeria

Soludo's vast knowledge in the world of economics at both national and international levels, was instrumental to his emergence as CBN chairman in 2004, during the tenure of Olusegun Obasanjo.

It is also important to note that apart from the fact that the All Progressive Grand Alliance(APGA) is a formidable party in Anambra state, Charles Soludo's impressive performance as CBN governor and wealth of experience as a globally recognized economist played a major role in his emergence as governor-elect of Anambra State.