(OPINION) Professor Olusola Eleka: The Eagle Above The Storm

By Barcanista (self media writer) | 1 year ago 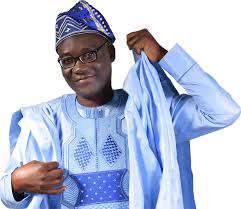 There are over sixty species of eagles all over the world and eagles have many attributes that makes them one endearing specie to consider and learn from.

The political terrain in Ekiti has created tensions amidst the lily livered because of an endorsement that has become the talking point of the moment but not to Professor Olusola Eleka who as an eagle understands the expectations and manifestations of an eagle.

An eagle has a long range vision which enables to see what is happening above, below and around it and nothing comes to him as a surprise. Professor Eleka has a vision solely fixated on reviving Ekiti fortunes, restoring the ancient Ekiti landmarks and repositioning the state on the map of global index of States with high delivery and respect for human capacities and nothing else really matters. His vision can't be blurred because where he is sitting and getting access to the future to is far above the machinations of men. Its only men of short vision that are distracted by noise; men of great sights are motivated by the noise - we need more noise!!!!!

Another profound attribute of an eagle is his tenacity during storms and his demeanor of calmness is one that even the gods have not found its mysteries. Storm is one attribute that separates a weakling from a strong determined and fearless leader. Like Abraham Lincoln the 16th president of the United States of America who guided his country during a devastating war and rode on the storm to become a world revered leader, Professor Eleka has the calmness to ride on storms to get to his desired place. A wise man said a man that understands the storm would see the storm as a vehicle to the top and not be fettered by it. Throw more storm at Professor Eleka, he needs it to dine on to get to the top.

Eagles are fearless birds who are ready to face whatever challenges that comes their way headlong. Does this ring a bell? How you face the challenges separates those who really want it to those who likes it. Professor has shown over the years that he is not afraid of the challenges that might come across his way because every challenge like Goliath to David is a step closer to the throne. The bigness of Goaliath is never the focus but the bigness of the God behind the Small David - Professor Eleka serves a living God.

Eagles are also known to be high flyers which makes them.soar as high as 10,000ft above ground level and no bird can ever fly as such level and peradventure you find another bird at that it has to be another eagle. Professor Eleka has flown at the highest level of governance in the state and he has confidently deliver on every assignment given to him such as till date nobody has met talkless of surpassing such feats. We are honoured to have a man like Professor Eleka in the vehicle of transforming this great land to real greatness. You can't serve the most HIGH and fly low - Professor is a high Flyer affiliated to the most HIGH.

Last, an Eagle is not a noise maker. This is not part of the attribute seen but my personal assessment of what makes an eagle what he is. Eagles don't make noise they make news like Professor Eleka whose comments even when he was serving as the deputy governor with Governor Fayose has never brought disrepute to the office of the governor even when there were lots of rumours he could have agreed to or debunked chose the path of silence to honour his leader. Eagles don't have time to make you look good - they are fixated on the focus. Leadership is not about showmanship but one's ability to deliver and Professor has shown that he is not a noise maker but a news maker. Governor Fayose told us then that Professor Eleka is the man and we still hold on to those words that he is the man suitable for the job.

So great people of Ekiti, nobody promised that the road to Canaan would be easy what was promised is that He will lead us to the promise land and the promise land we will get to in 2022 and once again I reinstate my commitment to the Eleka 2022 not because of anything but because he is capable, competent, charismatic and has the capacity to be the CEO of this great state.

Professor Eleka is the answer - no shaking.