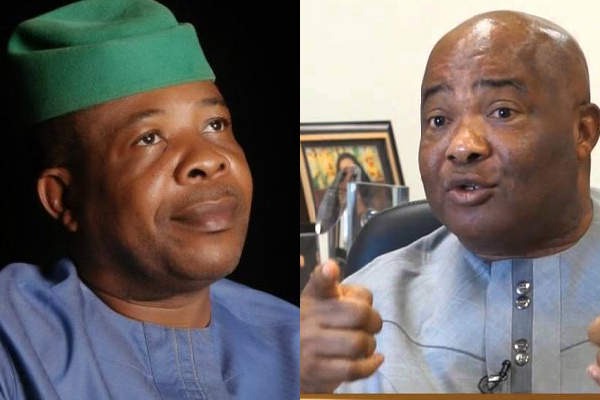 The Governorship candidate of Reform and Advancement Party (RAP) in 2019 Governorship election in Imo State, Barrister Okere Kingdom may haven opened the door for Emeka Ihedioha's potential return to Douglas House as the Executive Governor of Imo State. Recall that Barrister Kingdom Okere recently approached the Federal High Court in Abuja, seeking for a judicial interpretation of the Supreme Court's Judgement affirming the nomination of Uche Nwosu as the duly nominated candidate of APC for the 2019 Governorship Election in Imo State, the same party under which Governor Hope Uzodinma was declared winner of the Governorship Election. The Governorship election in Imo State was highly disputed among the parties that finished in the top 4 as each of the candidate approached the court, seeking to be declared winner on one ground or the other. However, it was Governor Hope Uzodinma who got the victory on January 14th, 2020 after the Supreme admitted results tendered by the governor on the ground that they were unlawfully excluded by INEC. This saw the immediate removal of Emeka Ihedioha who was earlier declared winner by INEC and sworn in as the Executive Governor of Imo State. With Barrister Kingdom Okere seeking a legal interpretation of the Supreme Court judgement which did not recognize Governor ahope Uzodinma as a candidate in the election, we may be in for another drama on Imo State Governorship matters as RAP has prayed the court to explain if APC actually sponsored Hope Uzodinma in the said election, whether Hope contested without being sponsored by any political party, and/or whether the constitution has been amended to allow a candidate to contest in an election without being sponsored by any political party. Okere concluded by praying the court that if all of the above prayers are not the case, that the court should mandate INEC to withdraw the certificate of return issued to Governor Hope Uzodinma and issue a new one to Emeka Ihedioha who has the highest number of valid votes.

The court has fixed July 20 as a day to hear the case. While we await the outcome, do you think that this may see Emeka Ihedioha returned as the elected governor of Imo state? Let us know your opinion by using the comment section below. Don't forget to like and follow our page for more interesting articles.