By Olatunde2 (self media writer) | 9 days ago

Details have emerged about the meeting between Akwa Ibom State Governor Udom Emmanuel and select elders and stakeholders under the aegis of Oro Nation Leaders of Thought, amid the wrangle over the name and location of the Ibom Deep Seaport project. 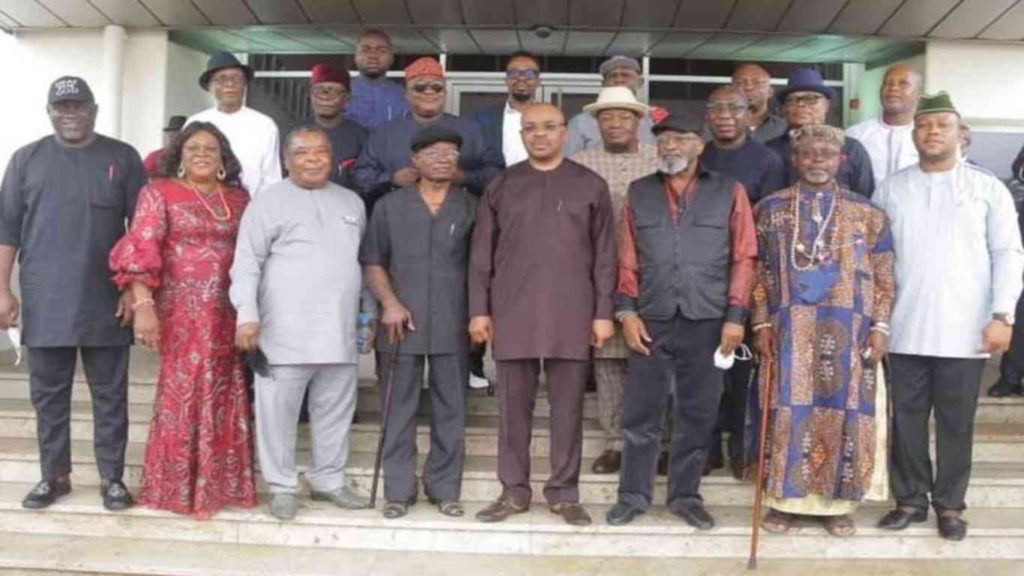 The meeting saw Governor Emmanuel approving the enlargement of the Technical Committee on the Implementation of Ibom Deep Seaport by the addition of four more persons. (C) Facebook.

“Following controversies which trailed the rumoured relocation of the Deep Seaport from Oro Nation and other pressing issues which affect us as a people, select elders and stakeholders under the aegis of Oro Nation Leaders of Thought met with the Executive Governor of Akwa Ibom State, His Excellency, Mr Udom Gabriel Emmanuel on Friday, October 1, 2021.

The meeting, which afforded the Oro Leaders of Thought a good opportunity to express the concerns of Oro people on the location and status of the deep seaport, as well as other issues which affect the well-being of Oro people achieved the following outcomes:

1. THE LOCATION OF THE SEAPORT

The Executive Governor of Akwa Ibom State, His Excellency, Mr. Udom Gabriel Emmanuel was emphatic on the fact that the seaport is sited in Mbo Local Government Area.

2. STATUS OF THE PORT

The Governor dismissed as false, the claim that what is being proposed is a dugout port. He maintained that no Investor can put his money in a dugout port.

3. ENLARGEMENT OF THE STATE IMPLEMENTATION COMMITTEE ON IDSP

Upon our request for an interface between the State Implementation Committee on IDSP and the Oro Technical Committee, the Governor in his wisdom said it was procedurally wrong to make the situation appear as Oro Nation versus Akwa Ibom State Government.

He rather asked the delegation to nominate Oro people into the State Implementation Committee. On this, we succeeded in securing four slots for Oro professionals.

4. RECOGNITION OF THE 5 LOCAL GOVERNMENT AREAS OF ORO NATION AS OIL PRODUCING COMMUNITIES

The delegation expressed dissatisfaction at the failure of government to implement the recognition of the 5 local government areas of Oro Nation as oil producing communities despite the 2012 Resolution of the National Assembly and almost two years after protests by Oro youths.

The Governor informed us that government was in the process of gazetting the 5 LGAs of Oro Nation as oil producing communities, but that process was stalled by litigation initiated by certain Oro people. He gave assurances that as soon as the matter was withdrawn from court, he would do the needful, as government can’t take action on a matter which pending in court.

The Governor gave the delegation insight into the problem which dogged the completion of the project. He reaffirmed the promise he said he earlier made to Archbishop Joseph Ekuwem that the project will be completed and commissioned before the end of his tenure in 2023. To buttress this, he informed us that the contractor is on site, and doesn’t have issues with funding.

Upon complaint by the delegation on the slow pace of work on this important road, the Governor assured that the project currently enjoys funding, and will be delivered at least to the extent of Okobo before the terminal date of his administration.

7. THE RECENT RECRUITMENT OF SECONDARY SCHOOL TEACHERS The Governor said that although the exercise followed objective criteria, he has set up a machinery to look into perceived anomalies in view of the complaints of stakeholders.

The delegation complained of lack of proportionate encouragement of Oro born investors and contractors by the state government, which the Governor promised to address. To underscore his seriousness, he promised to intervene in the case of Oro Nation Multi-Purpose Farm at Okobo.

On this, the delegation highlighted the need to follow due process through extensive public hearings to avoid creating tension and disharmony in the state. The Governor however noted that he wasn’t aware of such development. Luckily, the Speaker, Akwa tom State House of Assembly was part of the meeting. The Speaker, upon the prompting of the Governor, informed the delegation that the issue came up by way of a member’s motion in the House, and was directed to the office of the Surveyor General of the State for advice.

10. RESTORATION OF FERRY SERVICES IN THE ORO-CALABAR WATERWAY

Following a reminder on his promise to restore ferry services to the Oro-Calabar Waterway to forestall further loss of lives on that route, the Governor pledged to make good his promise

The Oro Leaders of Thought appreciate the Executive Governor of Akwa lbom State, His Excellency, Mr Udom Emmanuel for making the interaction possible as a gesture of love, in the height of tension and a seeming misunderstanding on the location and status of the Ibom Deep Seaport. We earnestly hope that in no time, we witness the manifestation of all gains recorded during the interaction.