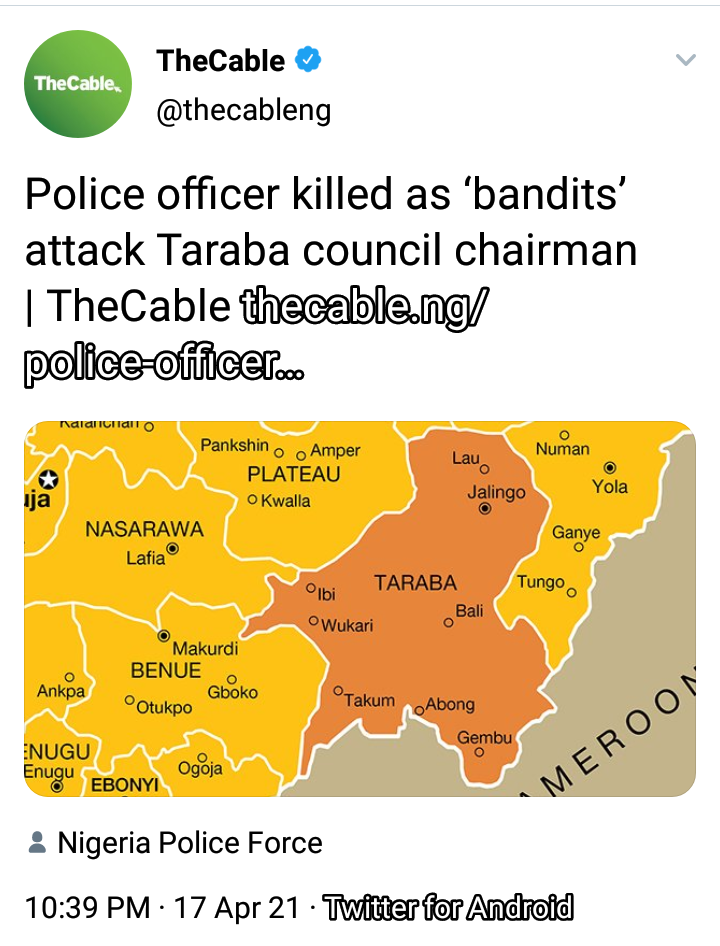 The deceased police officer was attached to the council chairman. He was a member of the 67 mobile police squadron located in the area.

Tikari, who confirmed the attack, said the bandits launched an attack on his motorcade while on his way to Takum, claiming the life of the officer in the process. The council chairman called on the federal government to deploy more security personnel to the area.

Takum and Wukari councils, in southern Taraba, have in recent times witnessed a surge of bandit attacks. 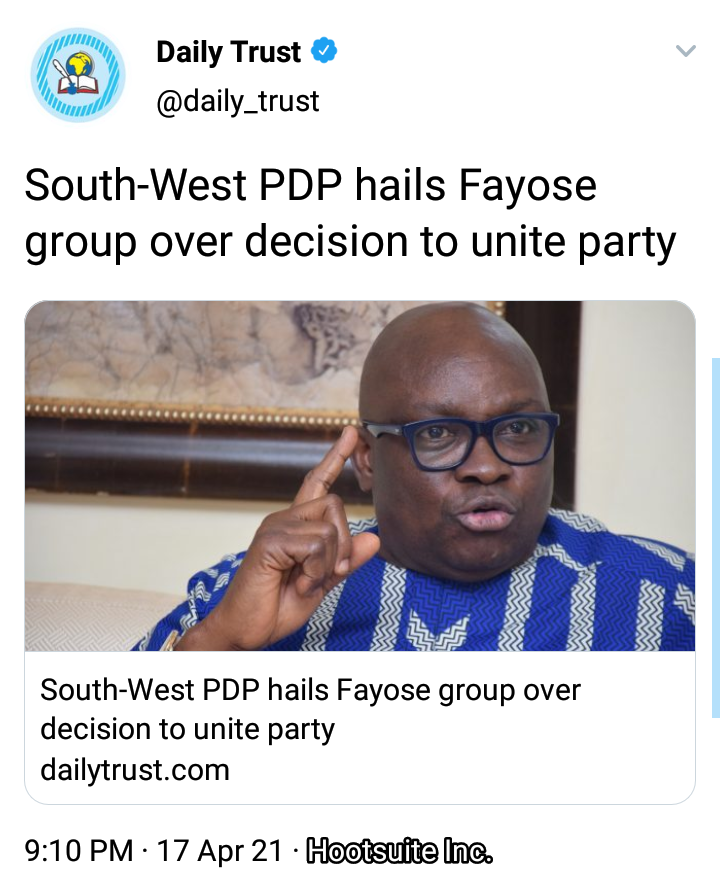 The People’s Democratic Party (PDP) in the South West (PDP) has commended former Gov. Ayodele Fayose of Ekiti over his decision to unite aggrieved members in the zone.

The party also commended Fayose for prevailing on Dr Eddy Olafeso and others, who contested in its just-concluded South-West congress, held in Osogbo, from challenging the outcome of the congress in court.

The PDP Publicity Secretary in the South-West, Sanya Atofarati, gave the commendation in a statement issued on Saturday in Ado Ekiti.

He praised the former governor for displaying high level of maturity by yielding to calls and appeals from party stakeholders to sheath his sword.

Atofarati said, “The outcome of the meeting held by the Fayose group in Abeokuta, the Ogun capital, on Friday was a good one and a right step towards ensuring unity and oneness of the party in the zone”.

I Sacrifice My Parent For Biafra–Nnamdi Vows, 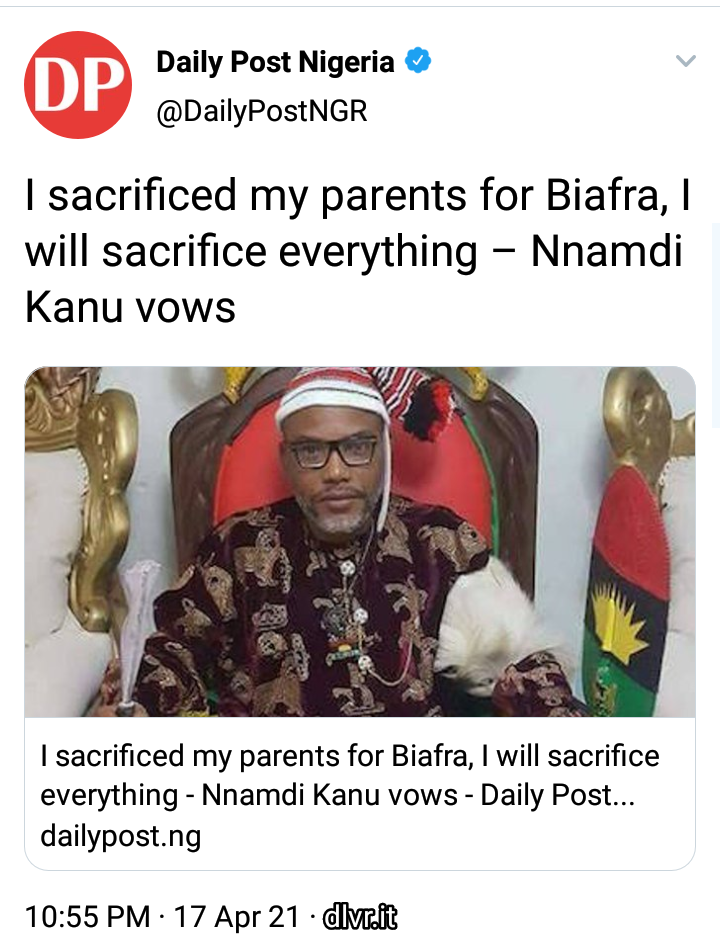 Kanu stated this on Saturday evening through an inscription on an image he tweeted on his official Twitter handle which also indicated the date and time for his usual live radio program on Biafra radio. The inscription reads: I sacrificed my mother and father to get Biafra. I will sacrifice everything”.

Meanwhile, in a separate tweet, Kanu while reacting to a publication by an online news platform that reported “seven military officers arrested for supporting bandits”, said he earlier predicted it. 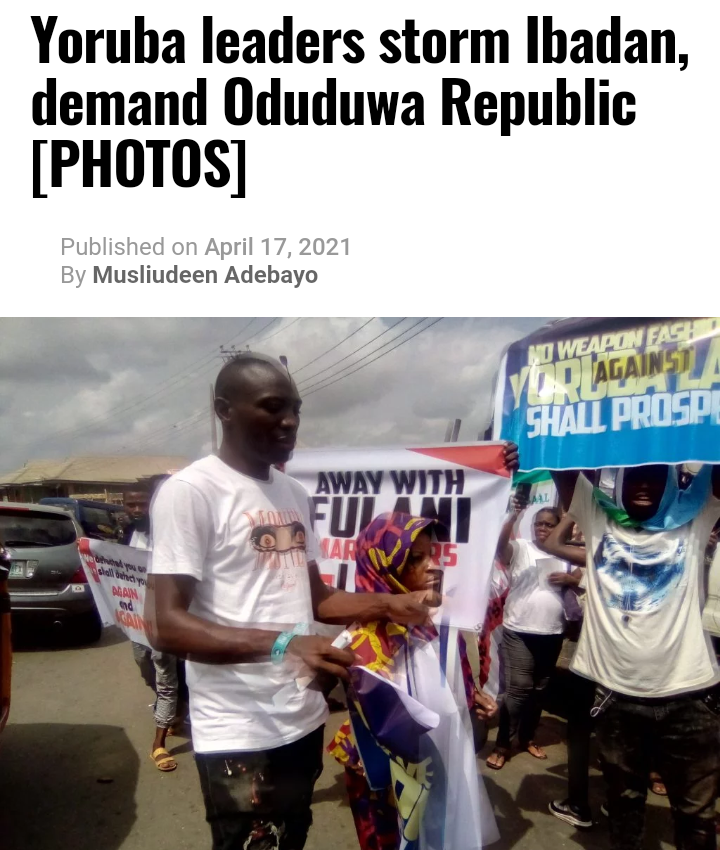 Thousands of youths, women and leaders of Yoruba race are currently occupying some streets in Ibadan in demand for Oduduwa Republic.

DAILY POST correspondent, who is monitoring the procession, reports that the protesters are currently at the front of Mapo Hall in Ibadan, the Oyo State capital.

The protesters are led by a Yoruba group, “Ilana Omo Oodua”, clamoring for self determination.

The group is led by Professor Banji Akintoye, a former Senator of the Federal Republic of Nigeria. 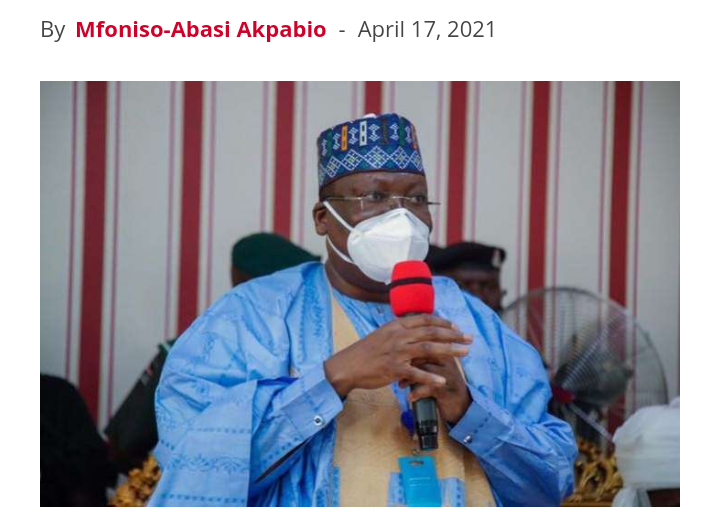 Senate President Ahmad Lawan has called for prayers for the leaders in government as they tackle the various challenges facing the nation.

According to his Special Adviser on Media, Ola Awoniyi, Lawan made the appeal on Saturday at the launching of Pataskum Emirate Central Mosque Appeal Fund at Potiskum, Yobe State.

The Senate President who announced a donation of N20 million to support the project said “every time leaders need prayers, particularly from the followership.

“Our leaders, particularly our President, Muhammadu Buhari, may God grant him good health, God has given him the leadership of this country through you.

He is trying his possible best for you and we too that are part of his leadership, we are trying our best to ensure that things are okay for Nigeria. 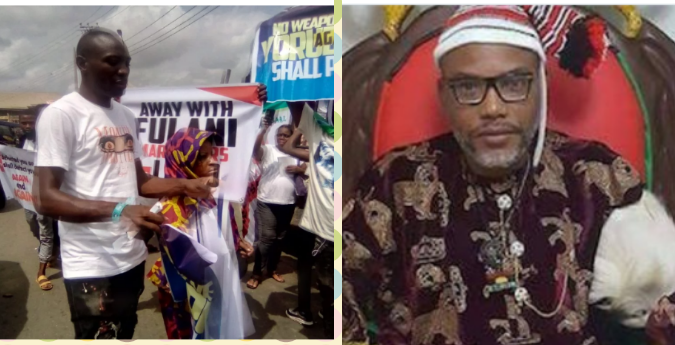 Photos: Classy Long Lace Gowns That You Should Try Our For Your Next Owanbe Party

Presidency 2023: My Plans For Nigerians If Elected As President - Orenuga Abayomi Victor campaigns

PDP Governors' Meeting Was a Political Jamboree With no Substance - APC

Why Chelsea should go for Harry Kane, after the Spurs striker announced his intention to leave.