Opinion: Are We Still discussing Obaseki Versus Oshiomhole in Edo State? By Osigwe Omo-Ikirodah

Opinion: Are We Still discussing Obaseki Versus Oshiomhole in Edo State? By Osigwe Omo-Ikirodah 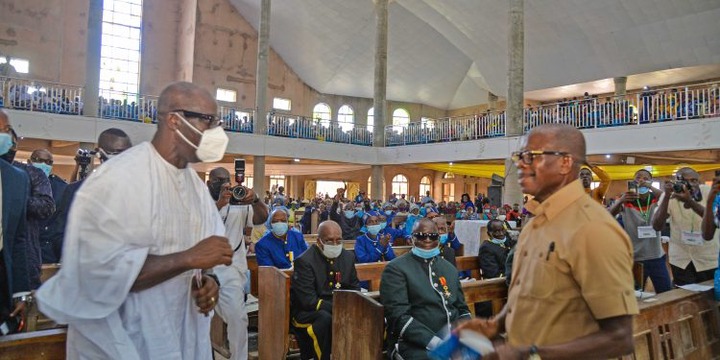 Yesterday the media was abuzz with a chance meeting between the Edo State Governor Godwin Obaseki and his predecessor Adams Aliyu Oshiomhole, the event was at the Centenary Birthday Thanksgiving of Msgr. Thomas Oleghe and 18th Canonical Erection Anniversary of the Diocese of Auchi held at Immaculate Conception Cathedral in Auchi.

Aside from the normal talks of " politicians are always friends we should learn not to be used and be dumped by political leaders, there are no permanent friends and enemies etc."

So many other conspiracy theories have been making rounds for just a contact meeting of fewer than 5 minutes.

So why the much uproar? Are we still discussing Adams Oshiomhole versus Obaseki in March 2021, six months after the September 19th Gubernatorial elections resoundingly won by Obaseki?

How long should the bitter rivalry between Adams Oshiomhole and Obaseki continue at the detriment of supporters of both parties? If you see the vigour in which both sides are throwing shades at each other then you would ask yourself when would the citizens begin to ask the Government to sit up and face Governance since the next Gubernatorial election is still about four years away.

Of what benefit is it to the common man in Edo State if Obaseki buries the political career of Oshiomhole right now as we speak? For crying out loud Obaseki has emerged the undisputed champion and he should be tasked with delivering the dividends of democracy.

These Edo people exchanging words on the popularity between Obaseki and Oshiomhole are they aware that Edo State is been run by only 10 men in a supposedly 24 members house of assembly?

It is pertinent to note that prior to the elections Obaseki employed thousands of aides and as we speak today they have all been retired without a replacement? What duties were these thousands of people doing then that Edo State Government no longer needs their services?

Is there not a vacuum of efficiency somewhere? Are Edo State citizens aware that there are no commissioners in place and the Governor has made it clear that there would be none anytime soon?

Also, the 18 LGA chairmen's tenure has expired and there is no sign of elections taking place anytime soon in those Government Councils?

If all these facts are known to both adherents of Obaseki and Oshiomhole then I advise they channel their energy towards positive vibes that can engage the thousands of these political jobbers that are now enlisted in the labour market.

Governance can not operate smoothly in the absence of basic constitutional roles such as State Executive Members, Complete representation of House of Assembly members and Local Government council bosses.

State Board Executives are not left out as some boards are yet to be constituted.

Modern-day governance with the advent of Social Media has made Governance vulnerable to lots of distractions. For example, there is a high probability that Both Adams Oshiomhole and Godwin Obaseki might read this article simply because of the high connectivity linked with social media.

So without having his unit heads in place how does a Chief Executive Officer navigates his way when so many distractions abound?

The Governor has myriads of problems to deal with ranging from security, infrastructural deficit, party discipline, private affairs, family issues etc. We should encourage him to begin the implementation of his MEGA plans and stop dwelling in frivolities.

My people Frog no dey jump go back, backwardness should not be our portion, I strongly advise we channel our resources and energy in making Edo State great again and leave this stale drama of Adams Oshiomhole and Obaseki who rugged pass.

iReporteronline notifies users that Osigwe Omo-ikirodah is the owner of the copyright: All Rights Reserved.