By Hisexellency (self meida writer) | 19 days

One of the major strategies to achieve political victory particularly in Democratic countries like Nigeria is through the backing of top political 'Godfathers'. Little wonder we always see our political contenders seeking for the prayers of prominent leaders like clerics and royal fathers. Sometimes, it is on the premises of this that a person who may not be skilled or experienced enough in matters of election may ascend to power. Once the right people are behind you, you can move in the right direction. We have seen several cases of such instance play out. 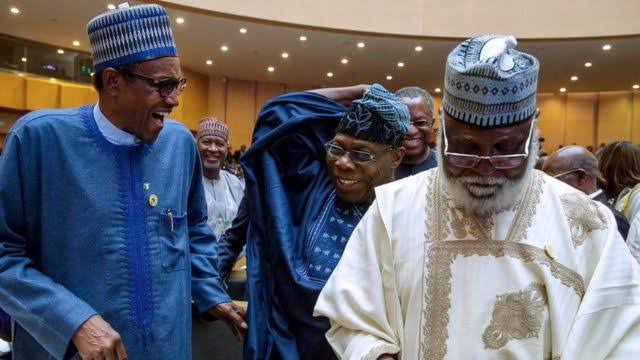 One thing has been observed in our system which is: regardless of your influence or the strength you can pull when contesting for a public office, if the 'power that be' do not back you, you will be left with a difficult struggle. A few unpopular politicians have risen to prominence because of the benefit they enjoyed by some certain figures who influence things. On the basis of this, almost every likely presidential candidate in the two major political party's have been reaching out to different groups and movements that can effectively boost their campaign. Endorsement Soliciting may soon be the new order of the day as we have seen in previous elections. No candidate can successfully emerge without this.

In our present political era, we have men who we recognise as being powerful enough to influence some certain decisions. Regardless of the political party, these set of people are much reverenced in national matters and their opinion or action counts a lot. They are usually the ones who 'anoit' candidates or draw massive support for them. Their presence in any team is highly regarded.

For now, the former heads of state Gen. Abdulsalam Abubakar, Olusegun Obasanjo and incumbent President Buhari are three men who have so much political value at the moment. These men have reached the apex of their career and the know the nitty gritty of the Nigeria political sphere. Coincidentally, they were all military men. The trio are still actively involved in politics and are like elder statesmen in the nation. 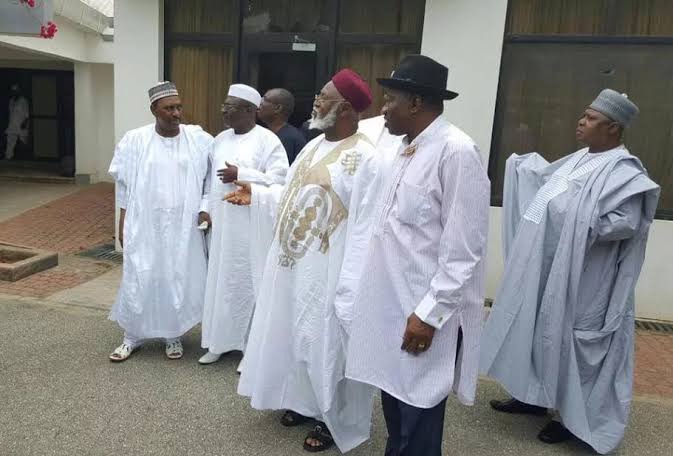 As we progress towards an election year that will be filled with intense struggle, you likely see the role each of thee three will play either in endorsing candidate or advising on electoral matters. Predictably they may all be on the same page in throwing their weight behind a particular candidate. 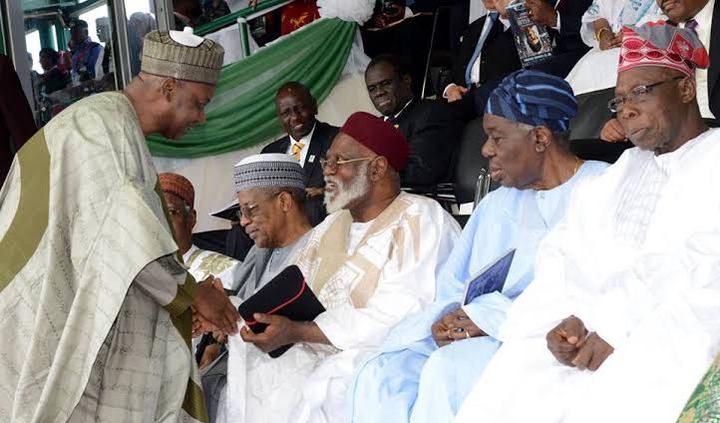 Interesting enough is the fact that there is a likely presidential candidate who could enjoy the full support of the trio and this will indeed be a big advantage to him. It may not be easy to maintain a kind of relationship that will compel any of the above mentioned to fully back you up in an intense battle such as the struggle for the presidential seat. So who is the man who has won the attention of the ex army colleagues? 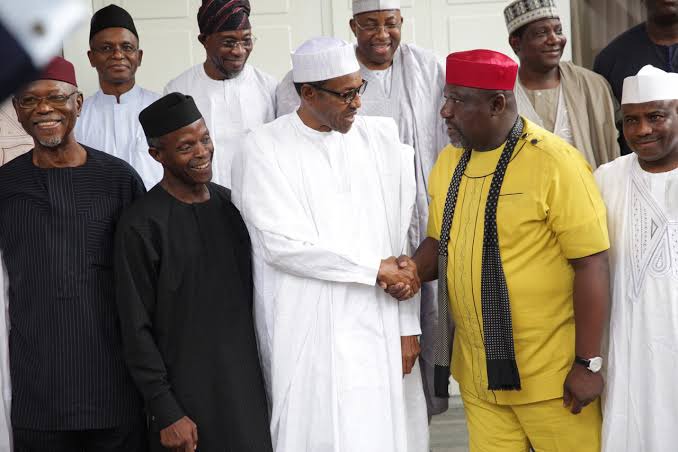 Owelle Rochas Okorocha happens to be among the smart politician who has a close relationship with men at the corridors of power. He is not just a learner in the game, but contesting elections in various positions have been like a career to him. Back in the late 90's, Rocha's was a little bit involved with some of the military officers in government and it earned him friendship with the personnel. Former head of stae Abdulsalam Abubakar is one those who is very familiar with the former Governor .He enjoyed favours from the some of the top agents who were in power then. When democracy began in 1999, the Jos born was privileged to be among the members of the national conference committee constituted by the then president Obasanjo. Since then He actively participated in politics including contesting for electoral positions. 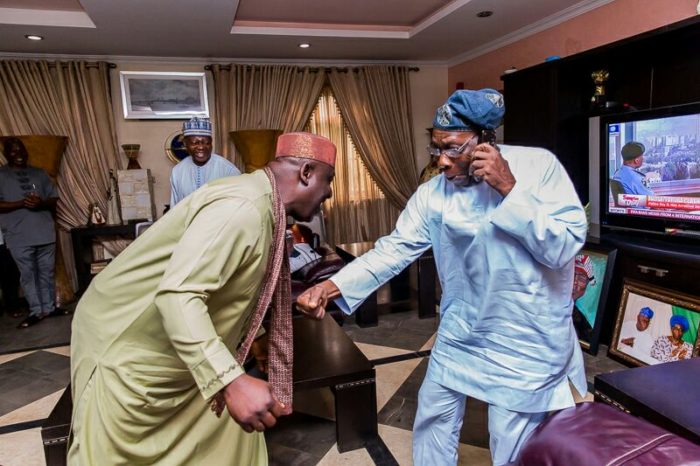 Initially in the PDP, he moved to the defunct ANPP to contest for the office of the presidential which he unfortunately lost in 2023. Former president Obasanjo made him his special adviser, a position which made him close to the ex military leader. Okorocha has always jumped from one party to another all for political reasons. After years of making attempts and jumping ship, he luckily won the IMO state gubernatorial election in 2011 defeating incumbent governor Ohakim. He has visited Obasanjo on a number of occasions and the latter has paid him homage and extolled his virtues while he was Governor. 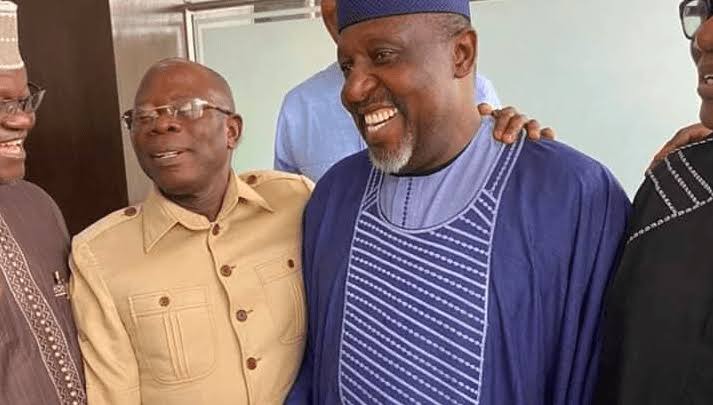 Towards the build up to 2015 elections, The ex presidential candidate dump the Peoples Democratic party for the All Progressive Congress. As it happened that APC came to power, Rocha's established a very good relationship with President BuharivImo state was one the first south eastern state to be visited by the President. The philanthropist also supported his campaign team massively in the east. He has always declared support for Buhari's administration. Sen. Okorocha is one of the arrowheads of the ruling party in the south east. The Uni Jo's graduate is undoubtedly an advent supporter of the incumbent and wishes to take over from him. It has been once rumoured in some section that if paradventure the APC intends to zone its ticket to south east, Mr. Owelle will be a top choice to consider. 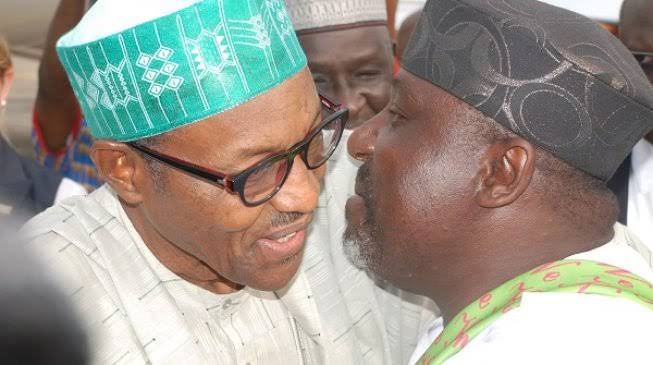 Buy and large These elder statesmen can confidently back Rocha's for the the highest office in the land.