By Timelyreport (self meida writer) | 1 months 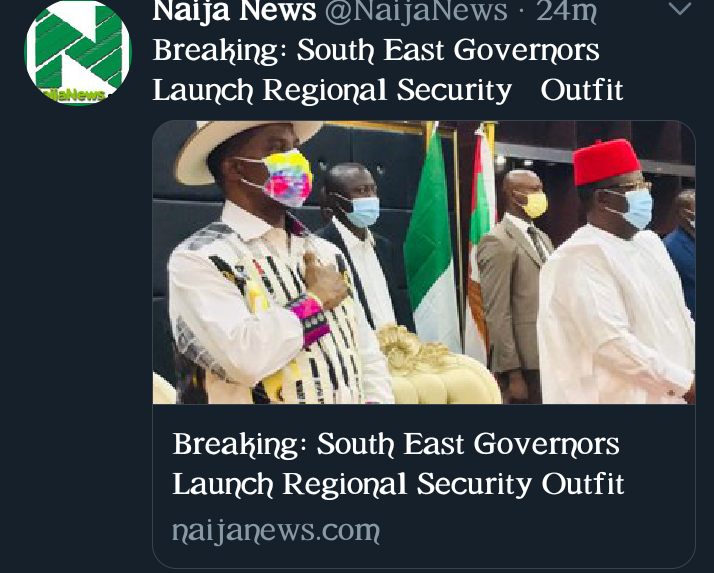 South-East Governors on Sunday established a regional security outfit to tackle security issues in the region.

The governors at the meeting which was held in Owerri, Imo State capital announced the establishment of EBUBE AGU, which will have its headquarters in Enugu State.

The Chairman of the Southeast Governors Forum, Dave Umahi, who read a statement released at the end of the South-East Governors meeting expressed optimism that the development will boost security. 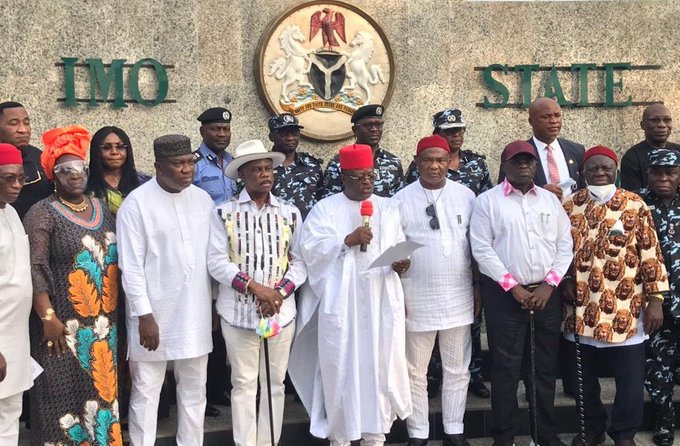 “After exhaustive discussions on the current security challenges in the South East and with valuable contributions from participants at the first South-East security summit in Owerri on this day Sunday, April 11th 2021, it was resolved as follows:

“To strongly and unequivocally condemn terrorism and banditry in any part of Nigeria, particularly in the South East. The meeting strongly condemns police stations’ burning, violent attacks on custodial centres with the unlawful release of inmates, and the killings including security personnel, natives/ farmers and headsmen. 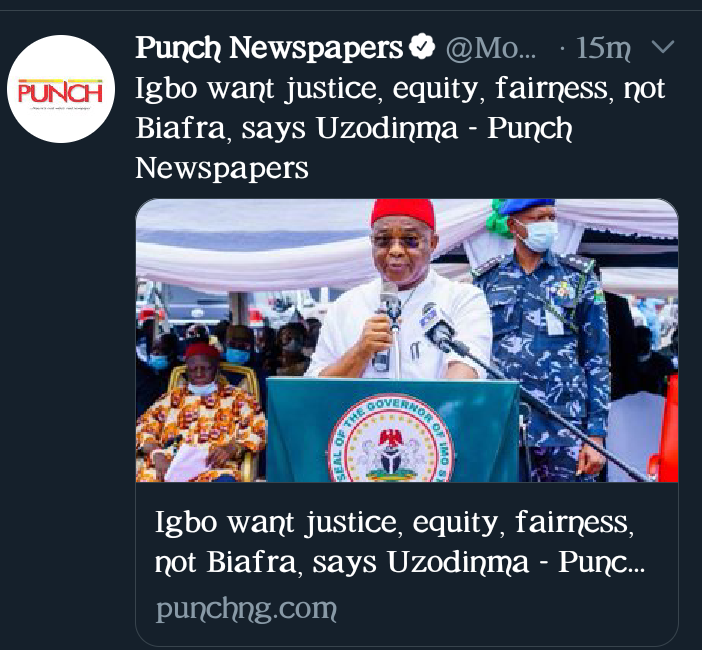 The Governor of Imo State, Hope Uzodinma, has said that what the Igbo ethnic group wants is “justice, equity and fairness,” not Biafra.

Uzodinma said this while delivering his opening address at the first South-East security meeting held on Sunday, April 11, 2021, in Owerri, the Imo State capital.

The meeting was attended by his counterparts from the other states in the South-East as well as security chiefs and other stakeholders in the region.

The Governor seized the opportunity to debunk the theories concerning the recent attacks on the Owerri Custodial Centre and the state Police Command by gunmen. 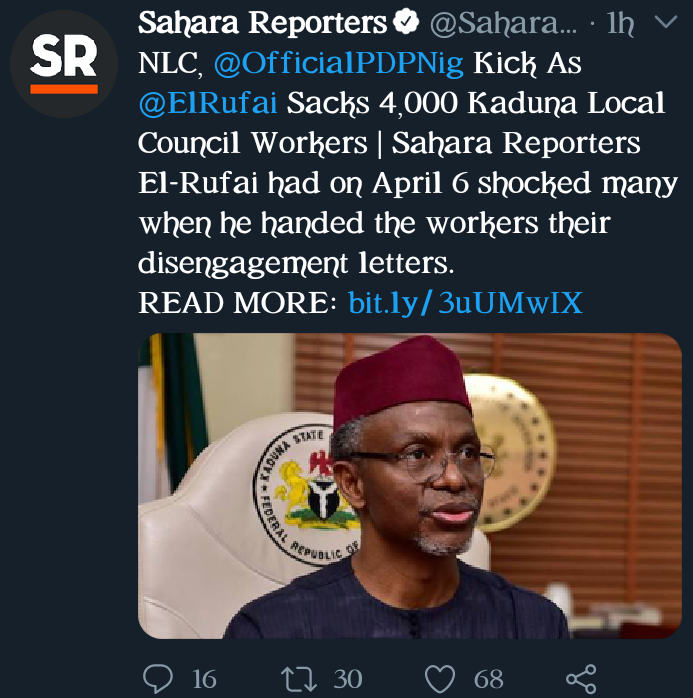 The Nigeria Labour Congress and the Peoples Democratic Party have condemned the decision of the Kaduna State Governor, Nasir El-Rufai, to sack 4,000 workers across the 23 local government areas of the state.

El-Rufai had on April 6 shocked many when he handed the workers their disengagement letters.

But reacting to the development, Comrade Ayuba Wabba, national president of the NLC, described the action as “arbitrary and cruel”, and called on the Kaduna State Government to reverse the mass sacking.

The NLC president said the decision of the governor to retire officers that are 50 years old and above; compulsory retirement of officers on Grade Level 14 and above, even when they are less than 50 years violate the fundamental human and trade union rights of Kaduna State workers.

A group identified as the Gan Allah Fulani Development Association of Nigeria (GADFAN) has called on the federal government as well as the Oyo State government to compensate Sarikin Fulani Igangan, Alh Salihu AbdulKadir.

As part of its demands, the group also demanded the government should take necessary action to restore the displaced Sarikin Fulani back to Igangan in Ibarapa North Local Government Area of Oyo State.

The group, which Naija News understands is based in Abuja further demanded that Yoruba activist, Sunday Igboho should be prosecuted by security agencies for his alleged role in the Igangan crisis.

The group made its demands known in Ilorin, the Kwara State capital when it visited the Sarikin Fulani Igangan who is currently staying in the state after the crisis that chased him out of Oyo State. 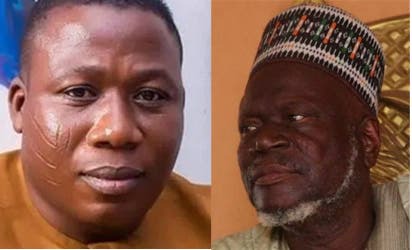 The group’s statement, signed by its National Chairman and National Secretary, Alhaji Sulaiman Yakubu, and Ibrahim Abdullahi respectively reads: “To our greatest surprise and dismay, up to this moment Sunday Igboho is moving freely as if nothing happened. 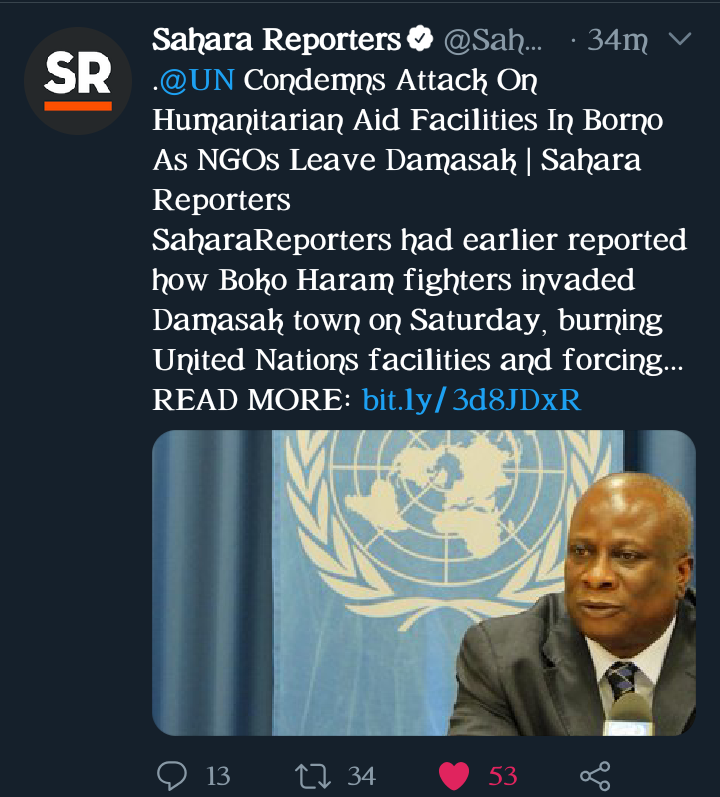 The United Nations Resident and Humanitarian Coordinator in Nigeria, Edward Kallon, has condemned the attack by Boko Haram militants on humanitarian aid workers in Damasak town of Borno State.

It was gathered that the terrorists, aided by their deadlier Islamic State West African Province fighters, burnt the UN office and at least three other international charity organisations contiguous to the UN facility.

Reacting to the development on Sunday, Kallon said the humanitarian operations in the town will be reduced due to the violent attack, noting that this will affect support to 8,800 internally displaced people and 76,000 people in the host community receiving humanitarian assistance and protection.

He stressed that aid workers alongside their facilities and assets should never be a target of terrorist attacks.

Kallon called on armed parties to ensure the protection of civilians, humanitarian property, and personnel while urging donors and stakeholders to continue their life-saving and life-sustaining support to the 6.4 million displaced people in the North-East.

How to save Nigeria: Atiku Abubakar Advises Nigerian Governors On What To Do

Opinion: 2 Things You Should Not Venture Into If You Are Not Prepared