The Ooni of Ife, Oba Adeyeye Ogunwusi Ojaja 11 finally opened up weeks after he had visited President Muhammadu Buhari over the embattled Yoruba Nation activist, Sunday Igboho. Recall that the traditional ruler had visited the President when his agitation activities in the South-west were being hinged on secession.

Photo of Ooni and President Buhari 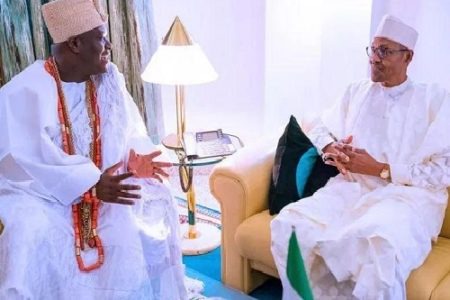 The monarch's revelation was coming days after the Federal Government had linked the embattled activist's bank accounts to an alleged terrorist.

The Minister of Justice, Abubakar Malami who disclosed this to newsmen in Abuja maintained that a serving federal lawmaker who happens to be a major financier of Igboho's agitation activities has been identified. However, he didn't disclose the name of the senator.

While speaking with BBC News Yoruba, Ooni explained how he had warned Sunday Igboho before his arrest in the Republic of Benin.

It will be recalled that Yoruba Nation agitator was arrested in the French-speaking country on his way to Germany with his wife, Ropo after he had narrowly escaped DSS bloody raid on his Ibadan residence on July 1.

During the raid, 2 of his associates were reported to have died during a gun duel while others were arrested and detained in Abuja. On Thursday, his remaining 2 aides earlier charged for terrorism by DSS were released from the detention.

Igboho has been in Benin custody since July 24, and he has two times spoken from the prison. However, his continued detention has generated a lot of controversies in recent times. In the interview conducted by BBC, Ooni made these revelations. These are contained in a report published by The Nation on Monday.

Photo of Ooni and Sunday Igboho 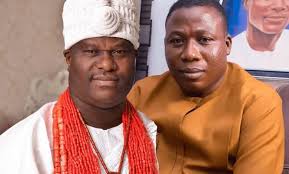 1. He received different advice from people and it overwhelmed him.

While revealing what led to his travail, Ooni claimed that he was wrongly advised. According to him, Igboho had truly wanted to fight for his kinsmen where he came from.

He stood up and fought for those killed in Oke Ogun by alleged killer herders. However, he got carried away by different pieces of advice people were giving him. These then made him overwhelmed and started behaving uncontrolled!

2. Buhari advised us to warn Igboho to stay calm and exercise patience but didn't listen.

Ooni said President Buhari asked the Yoruba leaders to warn him to peddle softly on his agitation but ignored all the pleas.

The traditional ruler who revealed how he had called on other monarchs and elders of Yoruba land for a meeting to advise Igboho to exercise patience said while making this effort, Igboho started hurling many bad words to him on the advice given to him by people following him.

3. Ooni said they are trying their best to secure his release from detention.

This is the third thing the monarch revealed while narrating what happened during his visit to the President. He described Igboho as his son and no matter what has happened, he can't be thrown away. He said he has forgiven him and worked tirelessly to secure his release.

Moving forward, Ooni advised the Federal Government to call the agitators for a dialogue for peace to reign in the country.