Few days to the next gubernatorial election in Anambra State, the promoters of the sit-at-home order have issued another order to restrict residents of the state from coming out of their, respective, homes on the week of the election. 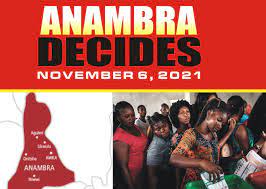 Remarkably, November 6 has been picked for the conduct of Governorship election of Anambra State. This election will allow citizens of the state to elect another person who will replace outgoing Governor Willie Obiano, upon the completion of his second term election.

Unfortunately, according to a story that was published by the Punch, the Indigenous People of Biafra, IPOB, had declared November 5 to 10, 2021 as days for sit-at-home in the South-East to put pressure on the Federal Government to release its leader, Nnamdi Kanu, from detention.

However, if the citizens of the Federal Republic of Nigeria who reside in Anambra State and are eligible to vote are denied their, civic, right to cast their votes, it would translate to a total breakdown of law and order, and would therefore result in the declaration of a state of emergency.

Surely, any attempt to thwart the efforts of the government to allow citizens of the country to exercise their civic right, in the course of participating in the forthcoming Anambra State Governorship poll may, surely, amount to anarchy.

Considerably, anarchy cannot take place in a state without breakdown of law and order of the state. This may, consequently, result into show of force between the government and the promoters of the sit-at-home order.

However, the Federal Government of Nigeria may have to prove to the world that the country is one and united under the superior order and authority of the President. Hence, the president of the country, Muhammadu Buhari, may work in hands with order concerned authority to declare state of emergency in Anambra State. This will be, in line, to restore orderliness and respect for rule of laws to the state.