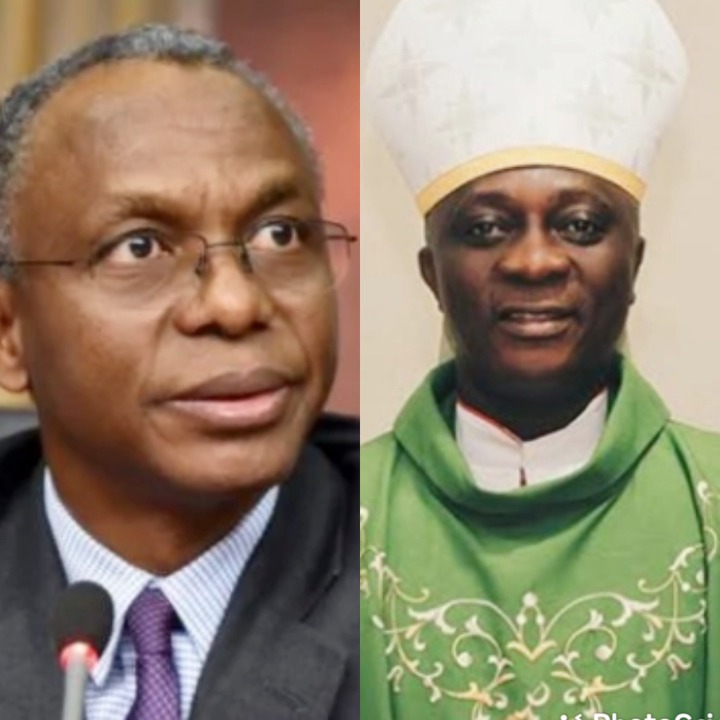 Igbos Should Produce Next President-Adewale 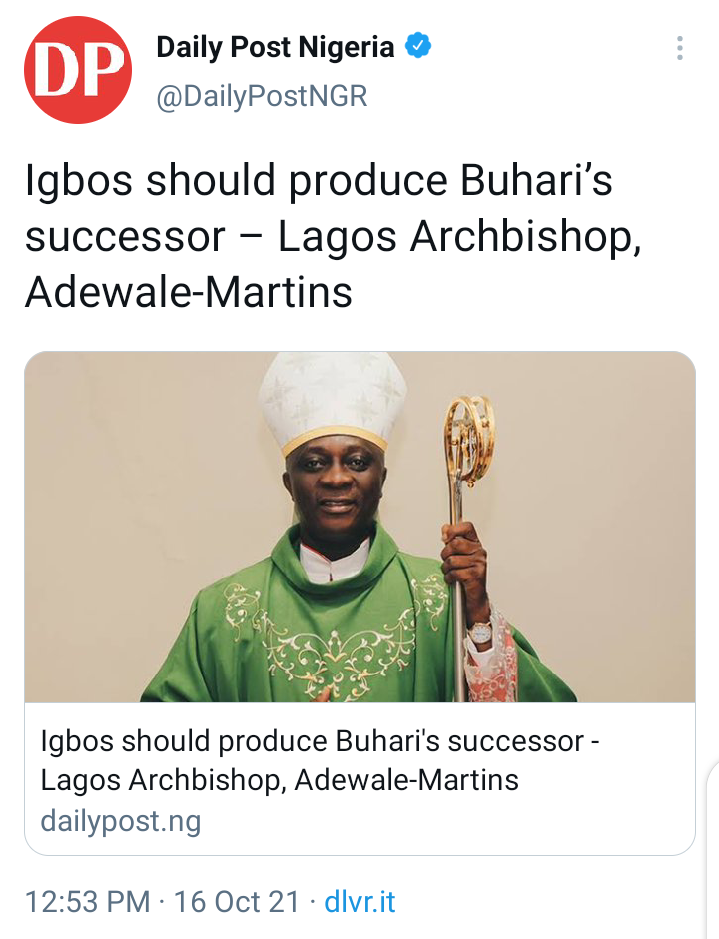 The Catholic Archbishop of Lagos, Most Rev. Alfred Adewale-Martins says the South-East should produce President Muhammadu Buhari’s successor in 2023.

The cleric spoke at the weekend during the 2021 Catholic Women Organisation of Nigeria (CWON) meeting in Lagos.

Adewale-Martins said an Igbo becoming the country’s leader would amount to equity and justice.

The archbishop noted that other zones have occupied the number one position except the South-East.

He said true federalism would resolve the unending agitations for self-actualisation by ethnic nationalities.

Adewale-Martins insisted that the system of government Nigeria’s founding fathers wanted is not being practiced. 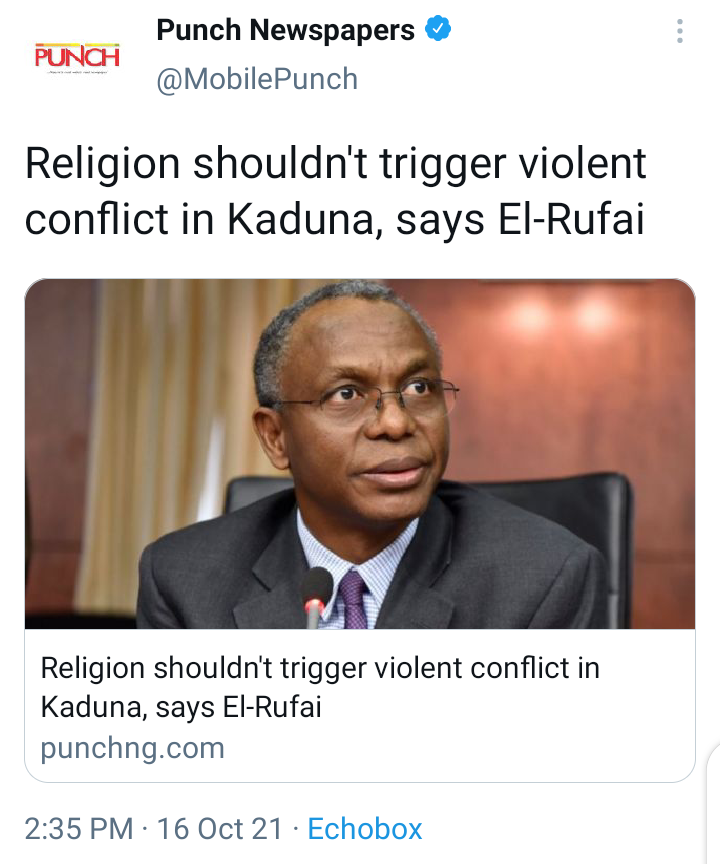 The Governor of Kaduna State, Nasir El-Rufai, has said religion should not be a trigger for violent conflict in the state.

This is as he lamented that religion has been weaponised to the point that it has become a device used to question the right of some people to exist and practice their faith.

El-Rufai, however, said that the state’s Religious Preaching Edict of 1984, which his administration reviewed in 2016, will help stamp out the poison from the negative practise of religion.

The Governor said this at the inauguration of the Kaduna State Interfaith Preaching Regulatory Council, held at the Conference Room of the Governor’s Office, Sir Kashim Ibrahim House on Friday.

According to him, “Most of the residents of Kaduna State are very religious, like other Nigerians. But Kaduna State is, unfortunately, one of the states in the country with a sad history of religious clashes. The personal exercise of faith and the better conduct and character that spirituality promotes helps society to progress.

But religion has unfortunately been weaponised so much that something that should bring God’s creatures closer together in a common awareness of mortal frailties has become a device to question the right of some of God’s creatures to even exist at all, let alone practise their faith or live wherever they wish. 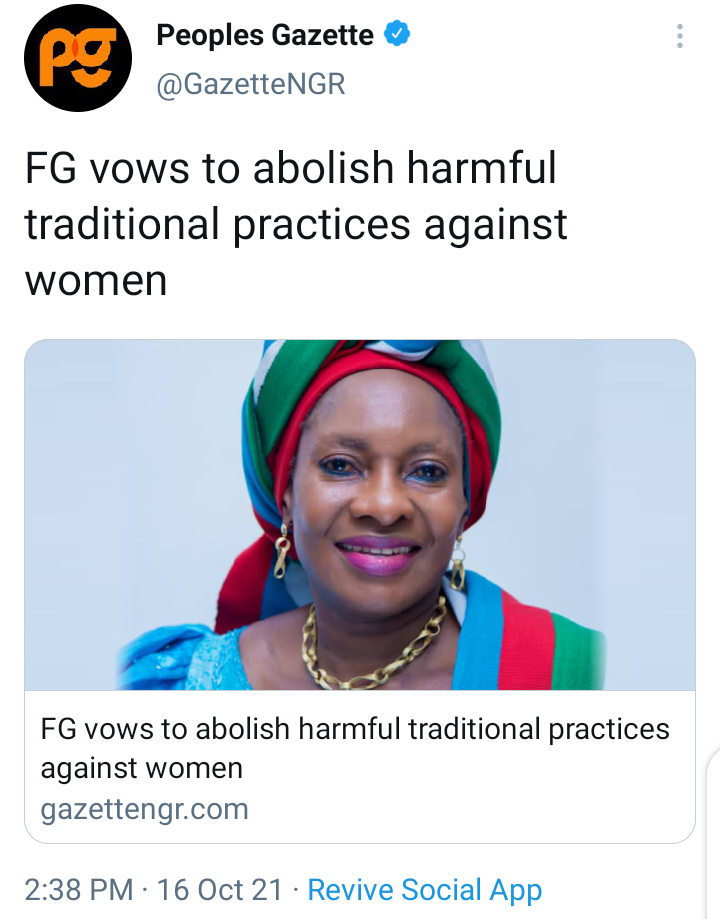 The federal government has restated it’s resolve to abolish all forms of violence and harmful traditional practices endangering the health and dignity of girls.

Pauline Tallen, Minister of Women Affairs, made the pledge shortly after a five-kilometre walk to create awareness on Female Genital Mutilation (FGM) and cancer on Saturday.

The exercise, which took place in Abuja, was in collaboration with the Women Against Violence and Exploitation (WAVE) Foundation and the United Nations Population Fund (UNFPA).

According to her, Nigeria has one of the highest rates of FGM with related complications that has exposed women to reproductive health challenges such as bleeding, genital tissue swelling/fever, infections, infertility, among others.

She noted that in spite of government laws and reforms against the harmful traditional practices, many cultural and religious practices still put the health of the women in doldrums.

“In spite of Government and partner’s positive interventions, high and community level advocacy, capacity building of circumcisers, including provision of alternate income for circumcisers, FGM practice still persists in our society.

“We need to provide more education by increasing advocacy on the health danger posed on girls and women by the practice of FGM.

“I wish to state that the Ministry is committed to abolishing all traditional practices that endanger the health and dignity of girls and womanhood in Nigeria and in this regard will work more with the Ministry of Health,” she said.