By FearlessQueen (self media writer) | 2 years ago 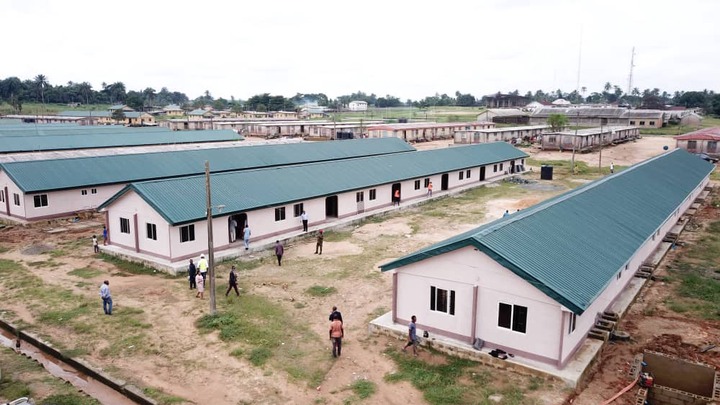 A new lease of life has been brought to residents at the Wellington Bassey Barracks, Ibagwa in Abak Local Government Area following prompt massive interventions provided by Governor Udom Emmanuel. The Akwa Ibom State Commissioner for Information, Sir Charles Udoh, accompanied by the State Government Information Management Team, toured some of the intervention projects, including 7-blocks of 12 residential flats reconstructed and remodeled by the Governor, new and rehabilitated portable water and other facilities.

Mr Udoh said the interventions at the Army Barracks, are part of measures by Governor Udom Emmanuel towards heightening security in the state. "With the commitment towards ensuring the maintenance of peace and security in the state, Governor Udom Emmanuel has since assumption of office left no stone unturned in building and strengthening partnership with security operatives. "One of these is through providing them with a congeniel and enabling environment to operate. "The 84 residential flats being remodeled and rehabilitated for the army as well as the portable water supply and all other accompanying facilities are geared at providing the Army with a comfortable accommodation to operate," the State Information helmsman said. He noted that the gesture by Governor Emmanuel will further ginger the army into challeneling energy towards effective maintenance of security, peace and order in the state. While recalling that, Governor Udom Emmanuel had earlier in 2019, provided 7 blocks of 12 flats to the Barracks to ease accommodation challenges, totalling 168 flats so far, Sir Udoh said, the Governor has been in the continuous process of providing necessary facilities like patrol vehicles to security agencies in the state to enhance their operations, emphasised that, the Governor's industrialization-drive can only thrive with peace and security effectively in place. The State Spokesman intimated that, the remodelling and rehabilitation work on the residential quarters, is undertaken through Direct Labour and supervised by the Ministry of Housing for cost effectiveness. The Commissioner for Information, Sir Charles Udoh who was received by the representative of the Commanding Officer of the 6 Amphibious Battalion, Ibagwa, Lt. Col. J. B. Sabo, was conducted round the residential quarters and other facilities by the Permanent Secretary, Ministry of Housing, Engr. Effiong Effiakedoho and senior staff of the Ministry. Engr. Effiong Effiakedoho who said work on the residential quarters was at 85 percent completion, intimated that, all the flats have been provided with kitchen cabinets and 2 standing fans while Governor Udom Emmanuel has also ensured the reticulation of water in the Barracks by the construction of a 96 inches Borehole with a 15 horsepower submersible pump for the army barracks. According to the Permanent Secretary, the Officers' mess within the Barracks has also been provided with a 1.5 horsepower submersible borehole while Governor Udom Emmanuel has gone further to refurbish and rehabilitate 2 number One million surface tank and 800,000 litre elavated tank. He said in addition to constructing an emergency 2000 litre elevated tanks to ensure the availability of portable water while work was ongoing on the refurbished gigantic tanks, Governor Emmanuel vigorously tackled the laying of a series of water pipelines within the Army Barracks to ameliorate the plight of residents from the lack of portable water supply.