A Year Of Tragedies: Check Out 13 Prominent Nigerians Who Died In 2020

By OnlineReporter (self media writer) | 1 year ago

2020 has been a year of tragedies, confusions and trials in various aspects both within Nigeria and around the world.

During the year, God took the lives of many Nigerians, including prominent politicians, businessmen, journalists, securities, academics and traditional rulers.

The incident shook many citizens. Some died of coronavirus infection, while others dies as a result of other diseases, and some for unspecified reasons. Some of the outstanding people who have died in Nigeria in the year 2020 include:

The first prominent Nigerian to die this year (of Covid-19) was Mallam Abba Kyari, the chief of staff to President Muhammadu Buhari. In August 2015, President Buhari appointed him chief of staff.

The 67-year-old man was buried in Gudu Cemetery, Abuja on April 18, 2020. Mallam Abba Kyari, an influential presidential official, was diagnosed with Covid-19 virus. from Germany when he went to meet Siemens executives on the power sector.

Alhaji Isma’il Isah Funtua OFR, MNI, lived from January 17, 1942 to July 20, 2020. He once held the position of a federal minister during the Second Republic. After completing his work with the government, Isah Funtua dive into business. He died on July 20, 2020 of a heart attack.

Prior to his death, Isah Isma’il Funtua was a close friend of President Buhari and one of the key figures in the Buhari administration where he was influential.

The son of the late Sama'ila Isah, Abubakar Sama'ila Isah is married to the daughter of President Muhammadu Buhari (Safinatu).

The late Senator Adebayo Sikiru Osinowo died of a coronavirus infection at the Hospital where the late Abba Kyari died. Osinowo was a member of the Lagos State House of Assembly for 16 years. He passed away on July 15, 2020 at the age of 64.

Former Oyo State Governor Abiola Ajimobi, 70, died on July 25, 2020 as a result of the Coronavirus outbreak. Prior to his death, he was declared the caretaker chairman of the All Progressives Congress (APC) after the Court of Appeal suspended former party chairman Adams Oshiomole.

From 2003 to 2007 Ajimobi was a member of the AD party where he was the senator for Oyo South.

In 2011, Senator Ajimobi won the governorship of Oyo State under the banner of ACN, and was re-elected for a second term in 2015. He is the second Governor of Oyo State to complete his term in office. State political history.

He was one of the prominent Nigerians who died in 2020. He is an experienced journalist and is the owner of the newspaper Leadership.

Nda-Isaiah died on the night of Friday, December 12, 2020 as a result of a short illness, according to his family. Isaiah is a pharmacist but has turned his attention to journalism.

He is also an entrepreneur and politician where he was one of the founding members of the APC and ran for the presidency of Nigeria under the party in 2014.

The Director General of the National Institute for Policy and Strategic Studies (NIPSS), Alhaji Habu Galadima Kuru, passed away on December 20, 2020 due to a short illness. He died at the age of 57 worldwide.

Major Gen. Johnson Olubunmi Irefin, a native of Kogi State, a former commanding officer (GOC) in the 6th Port Harcourt Army, died on December 10, 2020 due to a corovirus infection.

The announcement was made by the spokesperson of the Nigerian Army, Brigadier General Sagir Musa.

Former Minister of Education and Chairman of the Benue State Public Service Commission, Prof. Jerry Agada, passed away in Makurdi on December 22, 2020 at the age of 68.

Agada was born on November 11, 1957 in Orokam village of Ogbadibo Local Government Area of ​​Benue State. He was a civil servant and was appointed Secretary of the Benue State Examinations Board in 1996.

He later became the Permanent Secretary of the Benue State Ministry of Youth, Sports and Culture in 1999.

The traditional ruler of the Igala Kingdom (Attah Igala) Michael Idakwo Ameh-Oboni II, passed away on August 27, 2020 in Abuja due to illness. He died at the age of 72.

He retired as a housing officer from the Federal Development Authority (FCDA) where he was later appointed as Attah Igala in 2013.

On May 2, 2020, Alhaji Tafida Abubakar, 74, died of diabetes and high blood pressure. His Majesty passed away shortly after Kano State Governor Dr. Abdullahi Umar Ganduje elevated the kingdom to the highest rank.

Prior to his death he worked in the Ministry of Health and Agriculture and the National Census Bureau from 1991 to 2000 and other areas.

The late Professor Isah Hashim passed away on May 3, 2020. He was a traditional ruler and civil servant. He is a professor of political science and a former permanent secretary holding various senior positions at the Kaduna Technical School, BUK Kano University, Nsukka Federal University and ABU Zaria University.

The late Emir of Kano Alhaji Ado Bayero has appointed Prof. Isah Hashim as the new Jarman of Kano following the death of former Jarman Alhaji Muhammad Adamu Dankabo who was the chairman of Kabo Air.

The late Dr. Muhammad Uba Adamu passed away on April 27, 2020. He was the father of the former Vice President of the National Open University (NOUN) Prof. Abdallah Uba Adamu. Dr. Uba Adamu has died at a Kano State Hospital due to illness. He is survived by 17 children and many grandchildren.

On April 25, 2020 Professor Ibrahim Ayagi, the former chairman of the Economic Experts Committee during the Obasanjo administration, passed away.

Ayagi was a schoolteacher up to the University where he was later appointed as a commissioner in Kano State overseeing two ministries at the same time. He held several senior positions in Nigeria before his death. 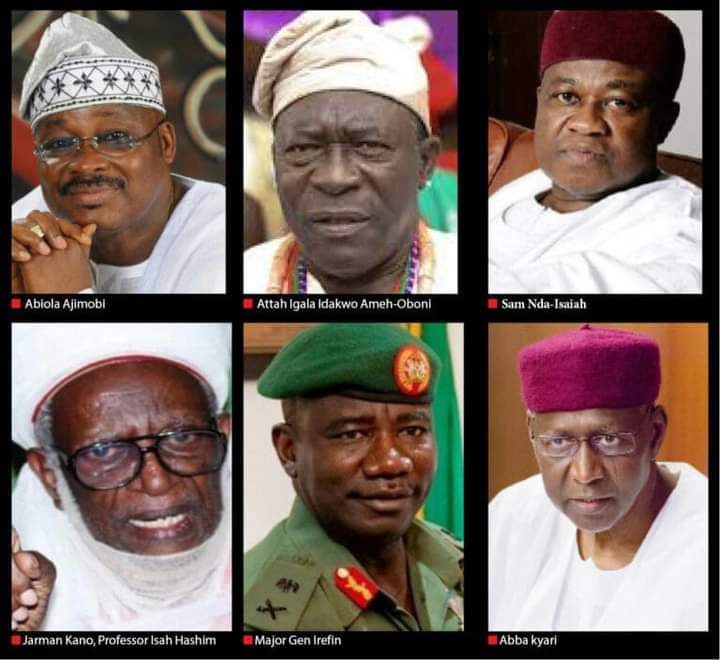 For more updates, simply tap on the follow button above. Have a nice day