Did the most promising leaders of Nigeria come from the Northern side.

Mr Jonathan's People's Democratic Party had dominated Nigerian politics since the end of military rule in 1999, but its supremacy was shaken by the formation of the Mr Buhari's All Progressives Congress party in 2013.

The APC in particular capitalised on Mr Jonathan's failure to deal with endemic corruption and the Boko Haram Islamist insurgency gripping northern Nigeria.

A Muslim Fulani from northern Nigeria, Muhammadu Buhari in 1983 helped to oust elected President Shehu Shagari to become the first head of Nigeria's second period of military rule, lasting until 1999.

Babangida announced early in 1986 that a civilian government would be formed by 1990, later extending the date by two years to allow more time for preparation. He decreed that no politicians from the civilian regimes or office-holding military officials could stand as candidates. He allowed no political parties during the transition period and approved only two political parties when campaigning began. Expressing dissatisfaction with the process of fielding new political parties, the Babangida government created its own parties, the National Republican Convention and the Social Democratic Party (SDP).

Abacha received his formal military training at Nigerian and British military training colleges. He rose through the ranks in the Nigerian military and by 1983 had achieved the rank of brigadier when he assisted Ibrahim Babangida in overthrowing Shehu Shagari, who had been elected to his second presidential term in 1983. Muhammad Buhari became Nigeria’s leader, but just two years later Babangida overthrew Buhari and installed himself as leader with Abacha second in command. Elections were held in 1993 and were won by Moshood Abiola, a candidate supposedly supported by Babangida, who, however, annulled the elections and set up a civilian interim government, which Abacha quickly overthrew. 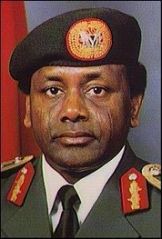