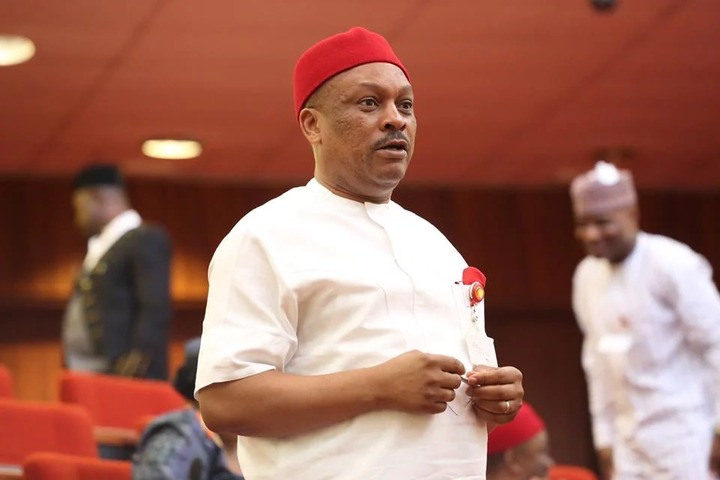 Permutations may change in the Peoples Democratic Party, PDP in Imo State with the adoption of Senator Samuel Anyanwu (Sam Daddy) as consensus candidate for the position of National Secretary of the party.

His nomination as national scribe, a powerful position in the party, is expected to be ratified at the PDP's national convention scheduled for October 30-31

Anyanwu was nominated for the position by South East leaders of the PDP in Enugu.

Ali Odefa, National Vice Chairman of the PDP, South East in a statement said with Anyanwu’s nomination “the PDP in the Southeast is now more than ever prepared and ready for the task ahead”

The implications of Senator Anyanwu’s election may however rub off on the state chapter of the party in Imo State, where he is said to be involved in a ‘cold war’ with former governor Emeka Ihedioha over the PDP structure.

Despite the much publicized “reconciliation” between Ihedioha and Senator Anyanwu early this year, a love lost has continued to fester between the duo.

Both of them had made their first public appearance together on March 7, 2021, at the South East Zonal Congress of the party in Enugu, signaling an end of the feud.

But many party stalwarts say such reconciliation was for the paparazzis as underneath lies deep and silent political altercations between the two political gladiators.

Anyanwu had vied for the governorship ticket of the PDP in 2019 which he lost to Ihedioha, who later emerged the party’s governorship flag-bearer and later governor of Imo State.

He faulted the governorship primary election and challenged his defeat up to the Supreme Court, where he lost.

The ongoing cold war between the duo may have compelled Ihedioha with the aid of the then National Chairman, Uche Secondus, to take total control of the party, shutting out the Senator who had represented Imo East in the Senate from 2015-2019.

The former governor has continued to maintain firm grip of the PDP in Imo State with his loyalists occupying all the party positions from the wards to the state levels. Majority, if not all the elected public office holders of Imo PDP extraction pay allegiance to him.

Ihedioha had also nominated his loyalists who were appointed into key positions of the party at the Zonal and National levels of the party, thus strengthening his firm hold of the party in Imo State and beyond, as he prepares for his 2024 governorship election.

With the exit of Uche Secondus as national chairman of the PDP, a new wave of political alignments and realignments have taken place in the PDP with Governor Nyesom Wike of Rivers State pulling the strings.

Senator Anyanwu is a known ally of the Rivers State Governor, with the latter fixing his men into key and strategic positions of the party as he prepares for his alleged Vice Presidential bid.

Analysts contend that If Anyanwu is ratified as the national secretary of the PDP at its national convention on October 30, it may have a “dramatic effect” on the party in Imo State.

Anyanwu is alleged  to be eying Imo governorship in 2024 and close watchers say that he may leverage on his new position as National Secretary to possibly alter the “unfavourable situation” in Imo PDP.

A chieftain of Imo PDP, Hon Bon Osuala told INNONEWS that if Senator Anyanwu emerges national party scribe, "it will throw up a new dimension in the PDP in Imo, his home state"

He said “The position of National Secretary of a political party is powerful post. A good politician can make use of the political mileage that goes with it.

Another party leader in the State, Hon. Evans Amukamara said Senator Anyanwu's nomination is being misinterpreted and several meanings are unnecessarily attached to it as it relates to the PDP in Imo State.

"There is no need to make such wrong assumptions. Ihedioha and Anyanwu are not in any contest at the moment. They had their differences in the past which is usual in politics and they have reconciled. I think we should stop over blowing this matter or attach unnecessary sentiments to it.

"What is key and paramount is the fact that the South East has secured a powerful position in the incoming party executives of the PDP. That should be our major concern and not coming up with divisive issues such as this" he told INNONEWS