Sani Abacha: 21 interesting facts every Nigerian should remember about him

When we are mentioning our past leader in Nigeria, we wouldn't mention ten without including Sani Abacha, not for his patriotism or good governance but for how he ruled Nigeria with iron grip. he was was a Nigerian statesman and military General who served as the head of states of Nigeria from 1993 until his death in 1998.

His military career was marked by involvement in all the military coups in Nigeria. when he was still second lieutenant with the 3rd Battalion in kaduna, he took part in part in the July 1996 Nigerian counter-coup from the conceptual stage.

Furthermore, he was part of 1983 Nigerian coup d'etat, which brought Mohammadu Buhari to power and which removed Mohammadu Buhari and brought General Ibrahim Babangida to power as a president and commander-in-chief of Armed force of federal republic of Nigeria and sani Abacha was named chief of army staff, and he later got an appointment in 1990 as Minister of Defence. 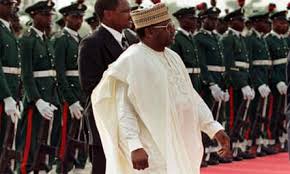 Though, his administration oversaw an increase in country's foreign exchange and construction of 100km road of urban road in major cities in Nigeria but despite all his good work, we cannot overlook how his regime was marred by gross of human rights abuse especially, the hanging of Ogoni Activist Ken Saro Wiwa

Let's take a look at some of his achievement and key event that worth to be remembered of, during his life. 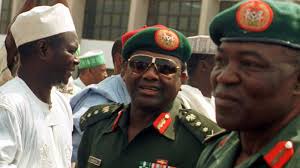 It's been 24 years since the death of this military ruler, what are the things can you still remember about him?

Here are the 21 things to remember about Sani Abacha

1. General Sani Abacha was born and brought up in Kano state, in northern Nigeria

2. Abacha married a Shuwa Arab, Maryam, also from Borno state, in 1965 and they had nine children, six boys and three girls. Their first child, Ibrahim, died in a plane crash in 1996.

3.Their child was born in Aso Rock in 1994 when Abacha was 50 and his wife 47. The boy was named Mustapha, supposedly after Abacha’s chief security officer, Hamza al Mustapha

4. He was the first and only military head of state who never skipped a rank to become a full-star general.

5. He announced the coup that brought an end to the government of President Shehu Shagari on December 31, 1983, and brought Major-Gen. Muhammadu Buhari to power

6. After Buhari was overthrown in a palace on August 27, 1985, it was Abacha that announced the chief of army staff, Major-Gen. Ibrahim Babangida, as the new military president and commander-in-chief of the armed forces in an evening broadcast (the coup speech was read by Brigadier Joshua Nimyel Dogonyaro).

7. On appointment as chief of army staff in 1985, he caused a stir when he said the issue of “second in command” to Babangida had not been resolved, even though Commodore Ebitu Ukiwe, as chief of general staff, was understood to be holding the position. It was later resolved in favour of Ukiwe.

8. Abacha was commissioned 2nd lieutenant in 1963 after he had attended the Mons Defence Officers Cadet Training College in Aldershot, England.

9. He fully took part in the July 1966 countercoup, which led to the death of the head of state, Major-Gen. Johnson Aguiyi-Ironsi, and subsequently resulted in the civil war.

10. Officially, he did not overthrow the interim national government in 1993. The head of government, Chief Ernest Shonekan, resigned and Abacha, being the secretary of defence and the most senior member of government, took over. Unofficially, it was a bloodless coup.

11. Abacha was known as a man of “few words and deadly actions” and he demonstrated this as head of state with one of the most brutal regimes Nigeria has ever had. There was massive crackdown on the media, civil rights groups and pro-democracy campaigns.

12. Two of the most important recommendations of the 1995 constitutional conference he set up are: 13% derivation for oil-producing areas and six geo-political zones.

14. His supporters describe him as a good economic manager and that he stabilised exchange rate at N22/$1 but the unofficial rate was N80/$1. This created colossal rent-seeking, with many “chosen” associates buying at the official rate and reselling at four times the rate in the black market.

15. It was under Abacha that Nigeria became a perpetual importer of petroleum products, as all the refineries packed up. However, 17 years after his death, Nigeria is still heavily dependent on fuel imports.

16. An unforgettable phenomenon under Abacha was the importation of “foul fuel” which had an offensive odour and damaged car engines.

17. He was instrumental to the restoration of peace and democracy in Sierra Leone and Liberia after years of civil wars.

18. He increased fuel price just once in his four-and-a-half years in office and set up the Petroleum (Special) Trust Fund, which was widely acknowledged to have performed well in infrastructural development and intervention programmes in education, health and water.

19. His wife set up what is now known as the National Hospital, Abuja. It was originally named National Hospital for Women and Children before it was upgraded into what is intended to be Nigeria’s no. 1 public hospital.

21. After his death, former president olusegun obasanjo during his regime accused Alhaji Ismaila Gwarzo, Abacha's national security adviser to have played role in looting and transfer of money of over $4 billion overseas account out of which over $1bilion has been recovered so far and recently Nigeria government recovered part of the money of sum of $311 million from US, Jersey

Regarding the last on the list, it is now up to Nigeria to use the money judiciously