If China isn’t a democracy, how did Xi Jinping become President?

If China isn’t a democracy, how did Xi Jinping become President? Surely he couldn’t have just decided “hey, I’m becoming the next leader of China!” There must have been some kind of formal decision process to follow for him to end up there.

Imagine a large hierarchical organization. Like an old-school conglomerate, or even the military. Leaders there (executives and generals) are not elected by popular vote. They are instead promoted from one rank to the next by managers and supervisors. In that way, they operate like the Chinese Communist Party. Back in the day, when large businesses promote their management from within, each level of management identifies talent, nurtures and promotes them. Promising candidates are rotated between different departments, as well as between the “mothership” and regional subsidiaries. Eventually, the best managers make it as the CEOs and CFOs. The military promotes leaders in a similar way. The Chinese Communist Party uses a comparable system. Civilians are recruited through the civil service exam to a position in the party or government. Recruits begin working and some are promoted. If, after a couple decade of promotions,[1]they look promising enough, they are considered for the top positions (like the Soviet nomenclatura).

There is, like every other system, a certain amount of clientelism and nepotism involved. On the other hand, it’s also a very competitive and even meritocratic system. Top leaders are professional civil servants with decades in government. They worked both in provinces as governors, and the central government as ministers. Key Performance Indicators (KPI) are used for evaluations for each job they were in, along with other forms evaluation. KPIs have included GDP growth, FDI, employment, crime rate, environmental metrics, and even family planning in the province. Xi Jinping is a product of that system. He graduated from college and worked first as a secretary for the minister of defense (a coveted job he got, no doubt helped by his father’s prominence). Then he was as a deputy party secretary in a prefecture, working his way to become vice mayor, city party secretary, and provincial governor. In 2007, he made it to the Politburo Standing Committee. He and Li Keqiang were the only two in their 50s in the Standing Committee, making clear that they will be selected as the next General Secretary/President and Premier, respectively. And Xi started on the top jobs in 2012 (General Secretary) and 2013 (Presidency). 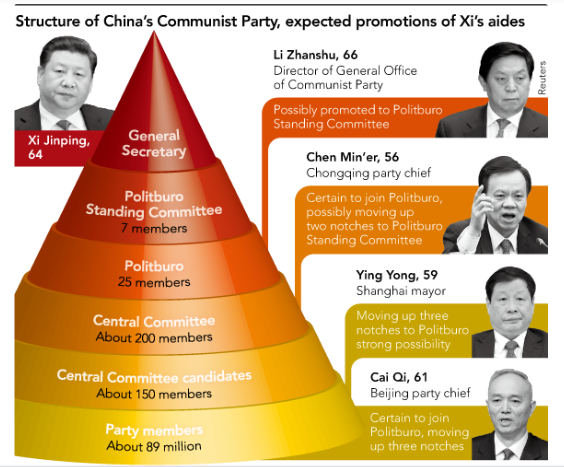 Note that the CCP transformed into a civilian-dominated party in the 80s and 90s. Before that, most top leaders were military generals with the People’s Liberation Army. When the CCP won the civil war, its generals became government leaders. In the 80s, Deng Xiaoping consciously promoted younger civilian officials to facilitate a smooth transition of leadership for a new era.