By GistFrank (self meida writer) | 21 days

1) Another Prominent Nigerian Escapes From Bandits.

According to Daily Post, the attack took place in Dogo-Gawa village of the council, which led to the death of his bodyguards. 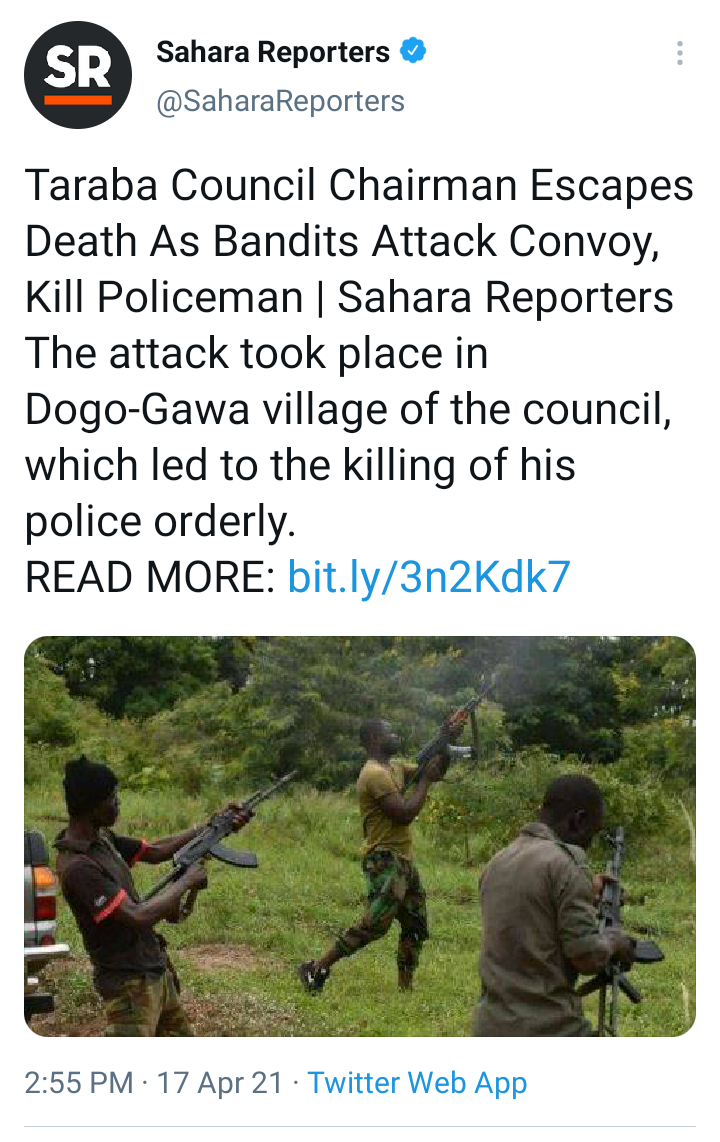 The deceased policeman is from "67 Mobile Police Squadron", located in the council.

Confirming the attack, Tikari said the militias, in their numbers, launched an attack on his convoy while on his way to Takum. He called for more redeployment of security personnel to the area.

A senior police officer from the area, who also confirmed the incident to our correspondent, could not understand why hoodlums terrorizing the neighbourhoods have decided to make police their targets.

The police officer, who identified logistics as one of the challenges making it impossible for the hoodlums to be tracked down, urged the state government to adhere to its promise by collaborating with the force, especially in the areas of logistics.

The council chairman, Daniel Adi, said that the attackers who stormed the community at about 3am, were repelled by the police.

Suspected Fulani herdsmen have invaded Mbakyondu, in Gwer-West Local Government Area of Benue State, killing no fewer that 11 persons, while others were left injured. 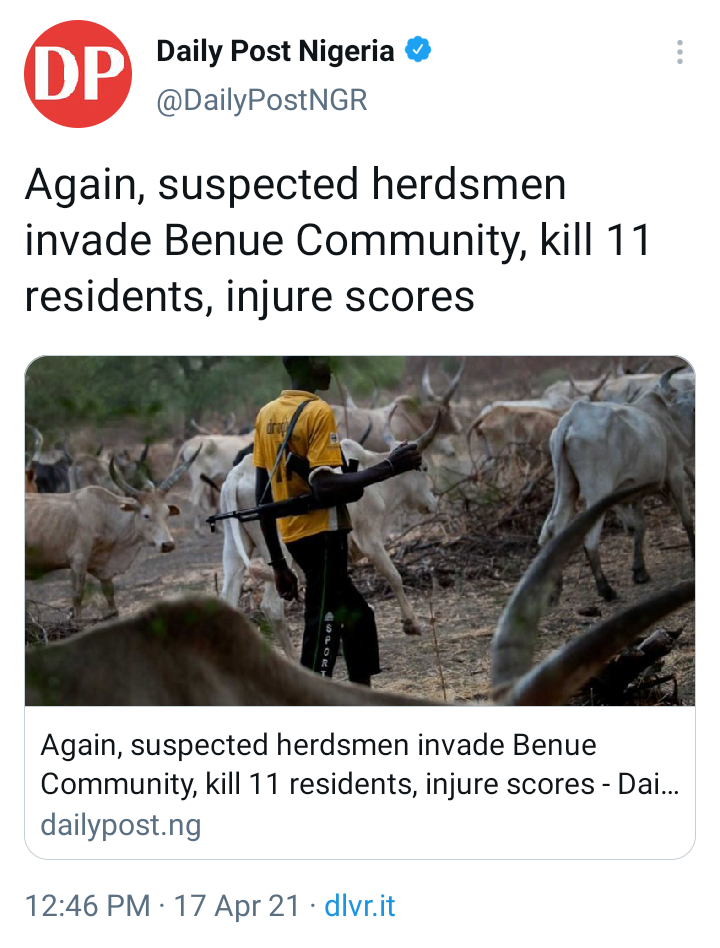 Mr Udam, a native of the village also said some members of the community were still missing as bodies were still being recovered.

In a text message she forwarded to DAILY POST on Saturday morning, the PPRO noted that a team of officers have been deployed to the area against further attack.

3) "We will support JUSUN strike until demands are met"-NBA.

The Nigerian Bar Association (NBA) in Anambra State stated that they will continue to support the prolonged nationwide strike by the Judiciary Staff Union of Nigeria (JUSUN) though it is affecting the justice system.

It's important to know that Kingsley Awuka made the assertion in a statement released on Saturday. 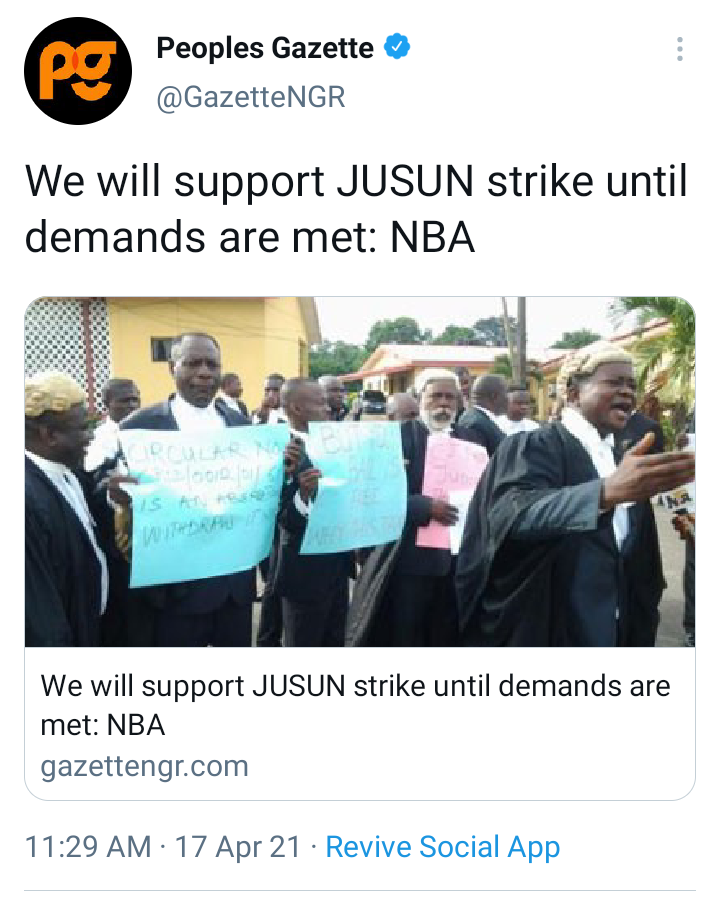 The statement said that the decision of the Governors’ Forum to suspend discussion and engagement of JUSUN was uncharitable, unpatriotic and totally unacceptable.

The JUSUN began a nationwide indefinite strike on Monday, April 6, 2021, over the non-implementation of judicial financial autonomy as enshrined in the Constitution.

Prominent leaders in the South-South geo-political zone hailed the Minister of Transportation, Rt. Hon. Rotimi Amaechi, for demonstrating rare leadership qualities and changing the status of the country’s transportation sector for the better.

They also praised the former Rivers State governor for building bridges of unity across the country and putting in place the necessary machinery for the victory of the All Progressives Congress (APC) in the country. 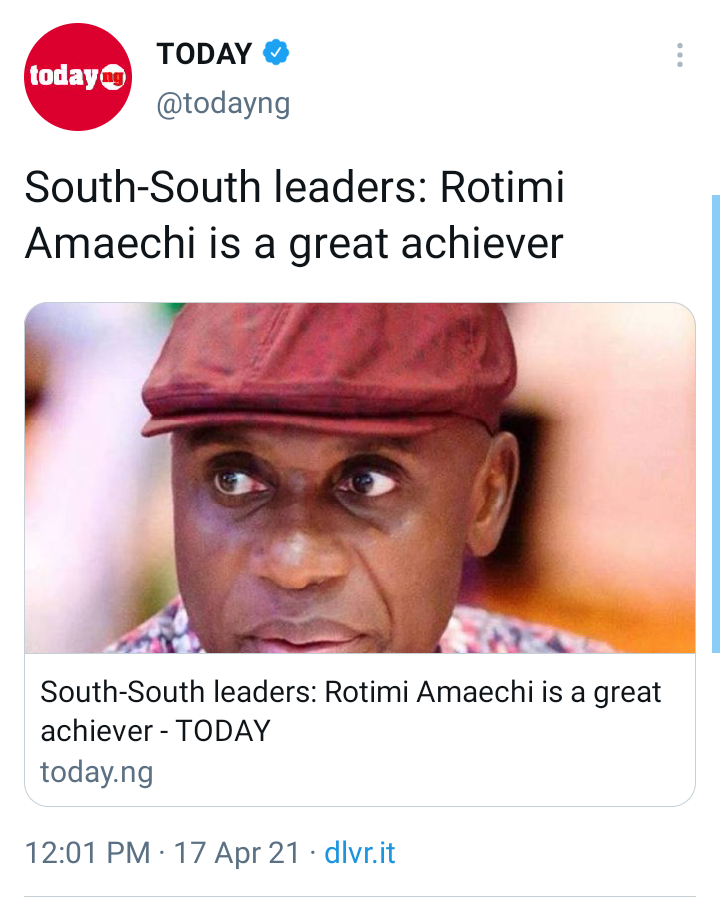 The leaders, cut across ethnic cleavages in the South-South geo-political zone, Praised Amaechi for conceiving and articulating policies that stood the test of time.

So, what do you think about these statements released by some Southsouth Leaders?. 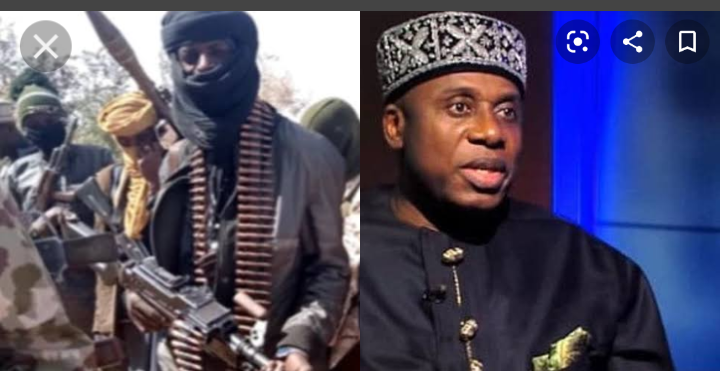 Today's Headline: ACF Reveals Why The Against Payment Of Ransom, Hoodlum Raze Police Station In Abia