Similarities Between The Two Successors Of Former President Olusegun Obasanjo.

By FrankChukwu (self media writer) | 7 days ago

Olusegun Obasanjo is the only man in Nigeria’s history to hand over power twice - in 1979 (Shehu Shagari) and 2007 (Umar Musa Yar Adua).

Interestingly, there are unique and mutual similarities between the two past Nigerian leaders whom Obasanjo handed over power to in Nigeria. 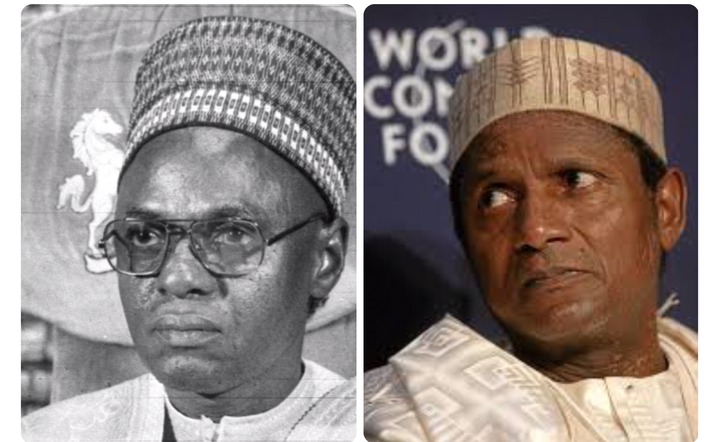 The two men were Muslims:

On that part of Shehu Shagari, he was a devout Sunni Muslim from northern Nigeria, Shagari – customarily dressed in Islamic robes – cut a contrasting figure to the bemedalled military men seen in almost constant attendance during his presidency. But for many senior officers, Shagari, with his reputation as a mild-mannered conciliator without a known agenda or power base of his own, was the ideal leader to take office under a new constitution, modelled on that of the US, which gave significant powers to Nigeria’s 19 federal states.

Also, on the part of Yar’Adua, he was born to an elite Fulani family, and his birthplace was an important centre of Islamic learning. His family was prominent in both traditional and modern politics; his father served as a federal minister during the First Republic (1960–66), and his late elder brother, Shehu Musa Yar’Adua, served in the military administration of 1976–79.

The two men were teachers:

Shehu Shagari worked as a teacher (of Science and Geography) at Sokoto Secondary School in the 1940s and early 1950s.

On the part of Yar’Adua, his first contact with the labor force was as an educational teacher. After working as a lecturer in several institutions, he moved into corporate sector from 1983 to 1999. It was during this time that he became actively involved in politics.

The both were Fulani people from the North-West region:

Shehu Shagari was born into a Muslim family in Sokoto State Nigeria, while on the part of Yar Adua, he was from Katsina State, both in North-Western region of Nigeria.

The two men were elected Presidents:

Presidential elections were held in Nigeria for the first time on 11 August 1979. The result was a victory for Sheu Shagari, whose National Party of Nigeria won the parliamentary elections. On the part of Yar’Adua, although he ran against several well-known and popular Nigerian military leaders and politicians, he went on to win a decisive landslide victory with 70 percent of the vote in the April 2007 election.

The Nigerian military coup of 1983 took place on 31 December that year. It was coordinated by key officers of the Nigerian military and led to the ousting of the democratically elected government of President Shehu Shagari and the installation of Major General Muhammadu Buhari as head of state.

24 February 2010, Yar'Adua returned to Abuja under the cover of darkness. His state of health was unclear, but there was speculation that he was still on a life support machine. Various political and religious figures in Nigeria had visited him during his illness saying he would make a recovery. Yar'Adua died on 5 May at the Aso Rock Presidential Villa. An Islamic burial took place on 6 May in his hometown in Katsina.