By SirVicNews (self media writer) | 20 days ago

According to Sahara Reporters, some angry Nigerian protesters have been captured in a video slapping a top government official who is believed to be one of those who followed President Buhari to the United States. 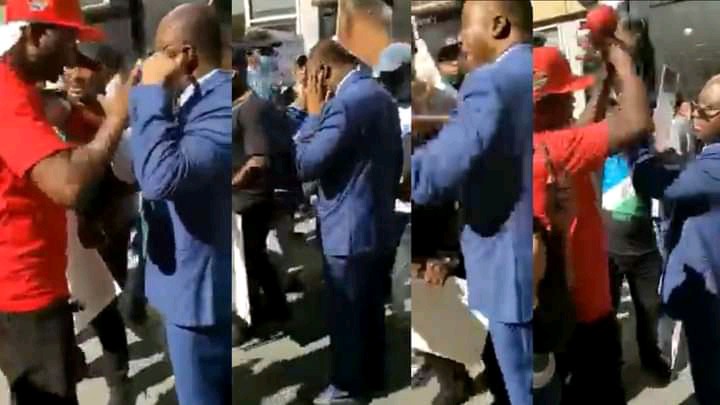 The top official was harassed and slapped by the protesters for intruding in their demonstration and trying to dissuade the protesters.

The video clip which was obtained by SaharaReporters disclosed the moment the top government official was lambasted by the protesters, as he tried to persuade them to walk away from the scene of the demonstration.

The official, whose name could not yet be determined, was seen advancing towards the protesters and yelling "I am for One Nigeria" but unfortunately he was resisted as the angry protesters yelled at him and eventually slapped him for pushing one of the agitators.

However, following what the angry Nigerian protesters did, I would say it is very wrong and they shouldn't go scot-free.

Obviously, it is very disrespectful for the protesters to slap a top government official. It actually shows that they probably have no respect for the government as they carried out such action.

Come to think of it, the official who was slapped was even trying to dissuade the protest which was definitely not a bad idea but the agitators, instead of respecting his orders as a top government official, they choosed to harass him.

Going forward, if the protesters who carried out this unfortunate act should go scot-free, there is a possibility that such incident might happen again. So in my opinion, it is better they do not go scot-free so as to serve as a warning to others.

Almost two and a half years after signing for Real Madrid, Hazard may finally make his Clasico debut

10 of The Funniest Haircuts in World Football

(Psalms 34:7): Say These Prayers To Stir Up Your Guardian Angel To Protect You This Weekend