Tinubu Beware, Atiku Is Coming Back Stronger In 2023

By Ayekooto1 (self meida writer) | 1 months

2023 was supposed to be a smooth-sailing ride for Asiwaju Bola Tinubu to be the president of Nigeria. As the national leader of the ruling All progressives Congress (APC), he is well positioned to win the presidential ticket of the party and win the 2023 presidential election. The only obstacle to achieving that is the potential formidable return of Atiku Abubakar.

After Tinubu left office as a two-term governor of Lagos state in 2007, he set about building his political empire transforming from a former governor to a king maker. While other former governors were rushing to the Senate to continue their political career, Tinubu sat back to build and expand his base and transform from a local champion to an astute national politician. His effort led to the formation of the APC and its ultimate victory in the 2015 general elections. 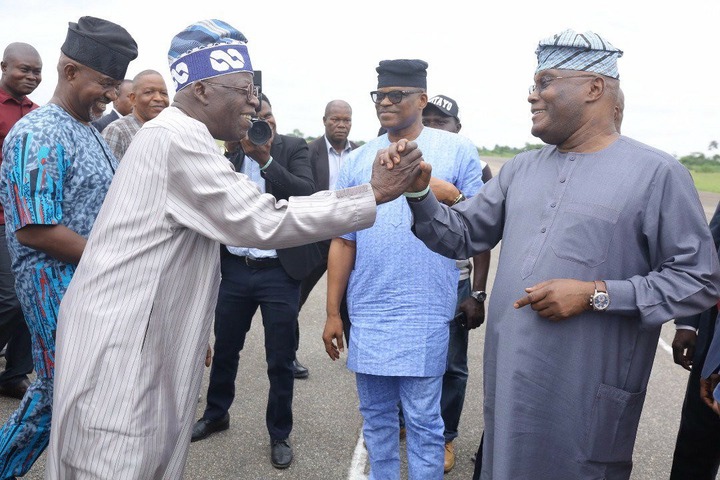 Although Tinubu has not made any official declaration, many political analysts believe he is well propped to contest in the presidential election and seems to be the most prepared of all potential presidential candidates. However, the Peoples Democratic Party’s new report shows Tinubu needs to beware of Atiku’s possible return.

The PDP committee set up to review the 2019 general election recommended that the party throw open the presidential candidacy as against its earlier stance on zoning. What this means is that any politician from any of the six geopolitical zones can get its presidential ticket and no other politician is in the party’s pole position than Atiku Abubakar.

Atiku who served as vice president for two terms during the administration of Olusegun Obasanjo has contested for presidency twice after then. In 2019, he was the PDP presidential candidate. Many assumed that his loss would signal the end of his presidential interest based on age and the assumption that the PDP would zone the presidency to the south.

The new development from the party means Atiku can and may likely renew his interest and he has both the financial strength, political acumen and ethnic advantage to match Tinubu and give him a run for his money. The road to the presidency doesn’t look so easy anymore for Tinubu anymore.