Three Issues that Southern Governors May Discuss When They Meet Again

By OmoobaAlekuwodo (self meida writer) | 4 days 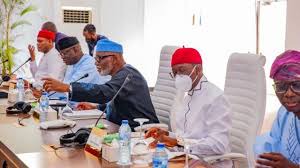 Photo: Cross section of Southern Governors, culled from the Tableshakers

The forum of the Governors of the 17 states in the Southern part of Nigeria under the aegis of Southern Governors' Forum are meeting, again, on Thursday.

The Southern Governors' Forum was formed to enable the Executive Governors of States in the region to discuss issues affecting the region.

Recently, the Southern Governors' Forum met and unanimously appointed Lagos as the permanent venue of their meeting, henceforth.

There are about three issues that the Southern Governors may, probably, decide to discuss in their meeting on Thursday.

One, the Southern Governors' Forum may, probably, opt to debate the security reports across all the 17 states of the region. The activities of the ravaging bandits, kidnappers and alike criminals may top the discussion of the day.

The Governors may decide to critically examine the security alert, recently, raised by the Ondo State Governor Rotimi Akeredolu. This may enable them to be battle ready and probably formulate strategies to avert the calamities.

Secondly, the Southern Governors may, likely, decide to critically discuss on their stance on the court litigation between the Federal Government of Nigeria and the Rivers State Government over the collection of Value Added Tax (VAT) by the state governments.

The Southern States Governors may, probably, consider to discuss, critically, the advantages and disadvantages of embarking on the legal tussle. They may also discuss and make decision on whether to join the Rivers State Government in the suit.

It could be recalled that Rivers State Government and their counterpart in Lagos State have taken strategic position in the course of stopping Federal Government from continuously collecting the Value Added Tax on behalf of the State Governments.

Interestingly, about two courts have delivered two different judgements on the case related to the disagreement between Rivers State and the Federal Government of Nigeria on who is eligible to collect the VAT. Rivers State Government has approached Supreme Court to set aside the judgment delivered by the Abuja Division's Court of Appeal that invalidated the judgement early delivered by a High Court sitting in Port Harcourt, Rivers State.

Thirdly, the Southern Governors' Forum may, likely, decide to revisit their agitation for all political parties to zone their presidential ticket to the Southern part of the country.

It could be recalled that the Southern Governors' Forum have, in one of their recent meetings, requested that all political parties should zone their presidential ticket to the region for unity, fairness and justice.