Chieftain From PDP Switches To APC 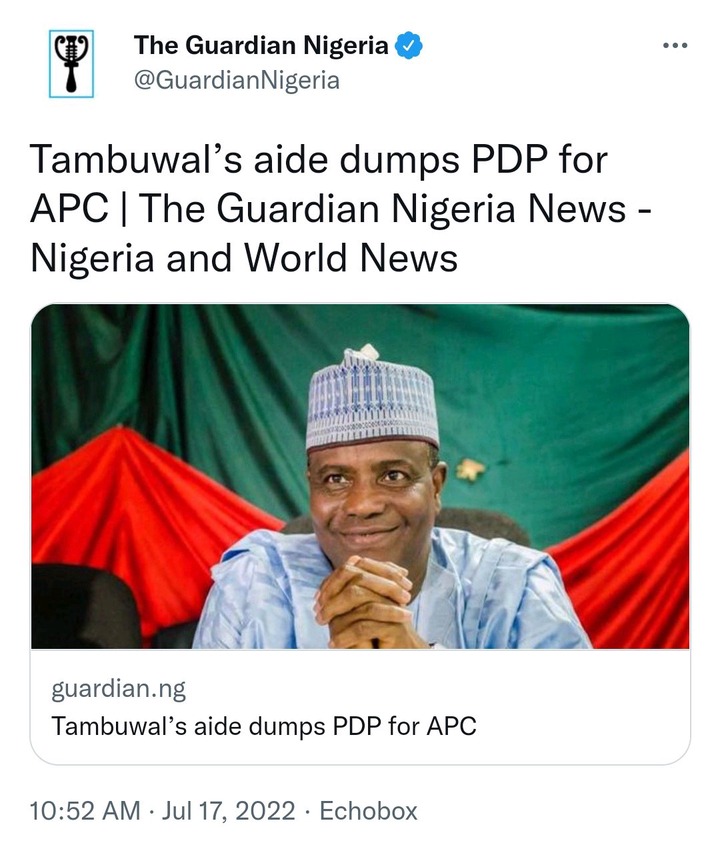 This was said in a statement made on Sunday in Sokoto by Bashar Abubakar, Sen. Aliyu Wamakko's (APC-Sokoto North) media assistant.

On Saturday, Wamako, the APC's governor-level leader, welcomed Gidado into the party.

Wamakko was also cited as saying that he was pleased to welcome the new member into the party and that he will be treated equally.

Disagreement Regarding Wike and Others' Absence From PDP Rally 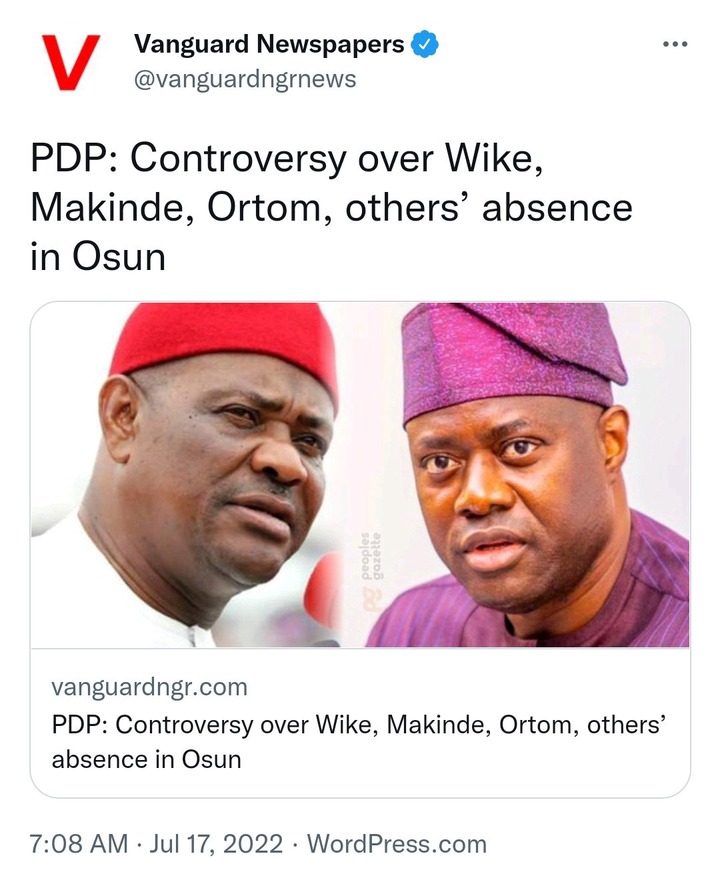 The top Peoples Democratic Party (PDP) governors were not present at the party's rally held in favor of Senator Ademola Adeleke, the PDP's nominee for governor of Osun State in yesterday's election.

The rally, the last event before the election, was held to increase the party's prospects of winning.

The only other PDP governor in office in the South-West, Mr. Seyi Makinde of Oyo State, Chief Nyesom Wike of Rivers State, Mr. Samuel Ortom of Benue, and Mr. Udom Emmanuel of Akwa Ibom were among the governors who skipped the event. 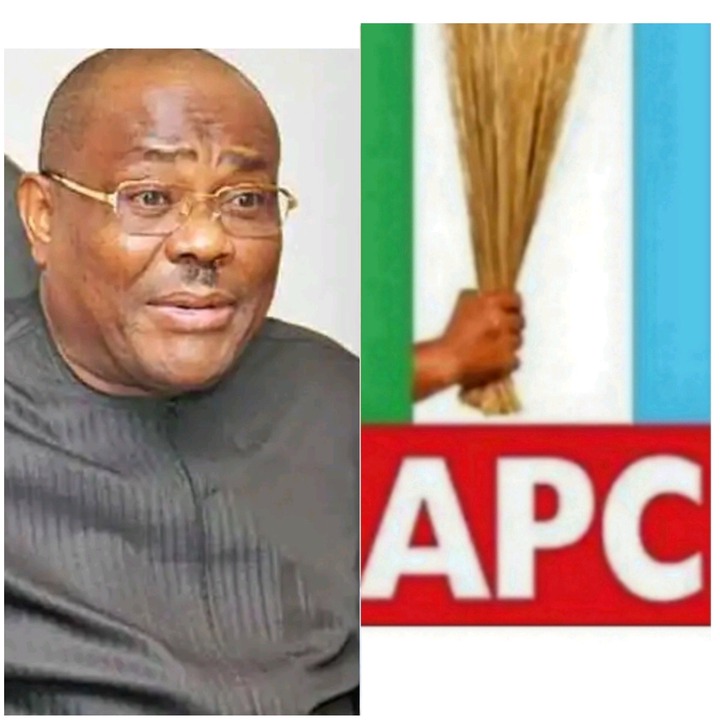 Aregbesola uses a verse from the Bible to commemorate Adeleke's victory. 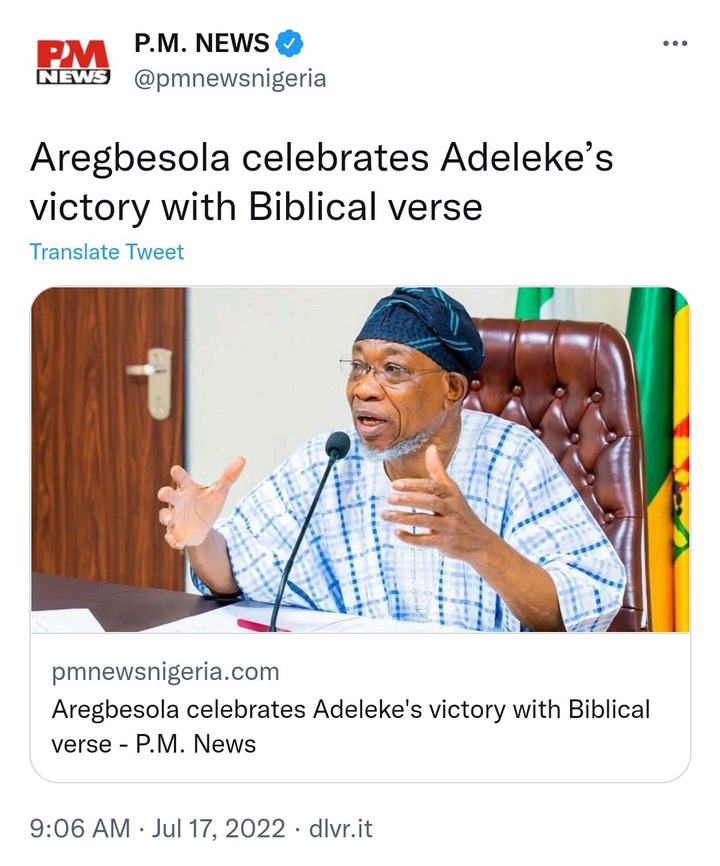 Source of the news: PM News

Rauf Aregbesola, the minister of the interior, looked to be gloating about his party's All Progressives Congress's electoral defeat in Osun state to the People's Democratic Party.

Aregbesola uploaded a verse from the Bible to a Facebook post on Sunday to explain why Ademola Adeleke beat out incumbent Governor Gboyega Oyetola.

The post was published at around 8 a.m., just after Adeleke was declared the victor and next governor by the Independent National Electoral Commission.

In the state, ties between Aregbesola, Oyetola, and Asiwaju Bola Ahmed Tinubu, the national leader of the APC, have been tense.

In the party's direct primary, the minister even supported Alhaji Moshood Adeoti, a former government secretary, to run against Oyetola.

After Oyetola won, Adeoti hauled him into court to ask for a disqualification ruling for failing to step down from the party's national caretaker committee promptly enough. 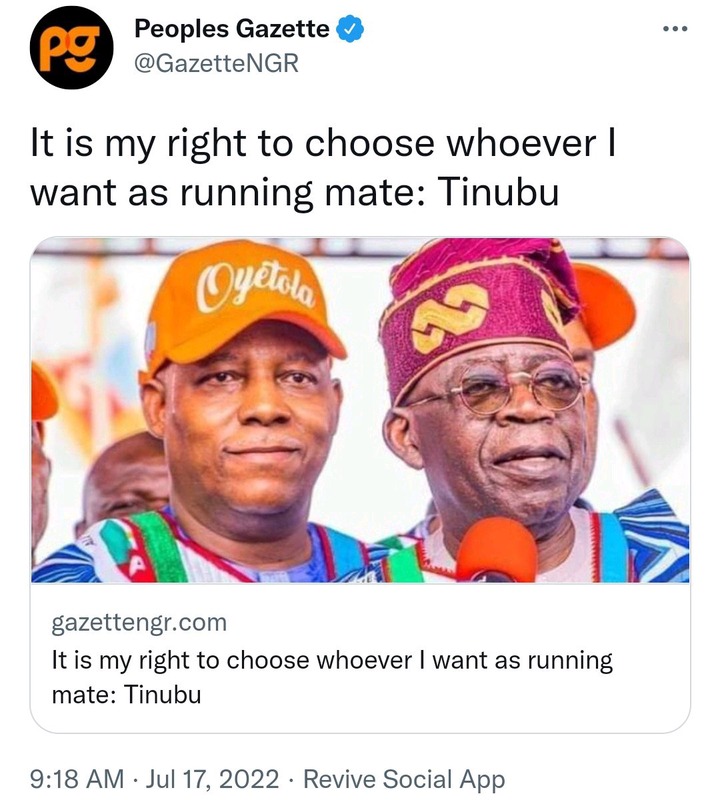 Bola Tinubu, the presidential candidate for the All Progressives Congress (APC), claims that when he selected Kashim Shettima, a former governor of Borno state and fellow Muslim, as his running mate for the 2023 elections, he was simply exercising a constitutional right.

On Saturday in Abuja, Mr. Tinubu spoke with state house of assembly speakers chosen by the APC and expressed his decision to run with Me Shettima.

The selection of Mr. Shettima as the presidential candidate's running mate was the first time since 1993 that Muslims would be running for both the presidency and the vice presidency on a major political party ticket.

Since the announcement last Sunday, his choice of running mate has drawn intense criticism from both party leaders and voters.