As of September, the public debt stock increased to N32.2 trillion, according to the Nigerian domestic and foreign debt report, released by the National Bureau of Statistics (NBS) and seen on Naira Metrics.

The 2.1 percent or N693 billion increase between September and December was announced in a press statement released by the Debt Management Office (DMO) on Tuesday. 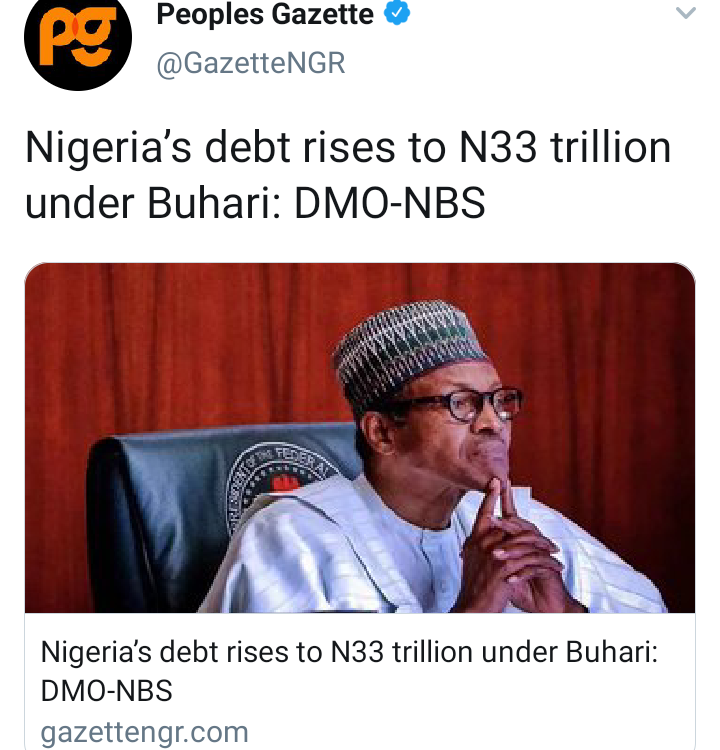 According to the DMO, the figures include the debt stock of the federal and state governments, as well as the Federal Capital Territory. The statement cited the COVID-19 pandemic as the basis for the increase.

The agency recalled that the level of new borrowing at the Federal Level as shown in the Annual Appropriation Acts, declined as part of the Government’s efforts to moderate the rate of growth in the public debt stock in order to ensure debt sustainability.

According to the DMO, “the trend was reversed in 2020 due to the economic and social impact of the COVID-19 Pandemic as New Borrowing in the revised 2020 Appropriation Act was N4.20 Trillion.

Many countries including the advanced countries also increased their level of borrowing as a result of COVID-19.”

The Peoples Democratic Party (PDP) says the report by the National

Bureau of Statistics (NBS) on escalated 33.3 percent unemployment rate in the country is a direct confirmation that the much-orchestrated claims of massive job creation by the Buhari Presidency and the All Progressives Congress (APC) are mere statistic hoax being used to deceive Nigerians. 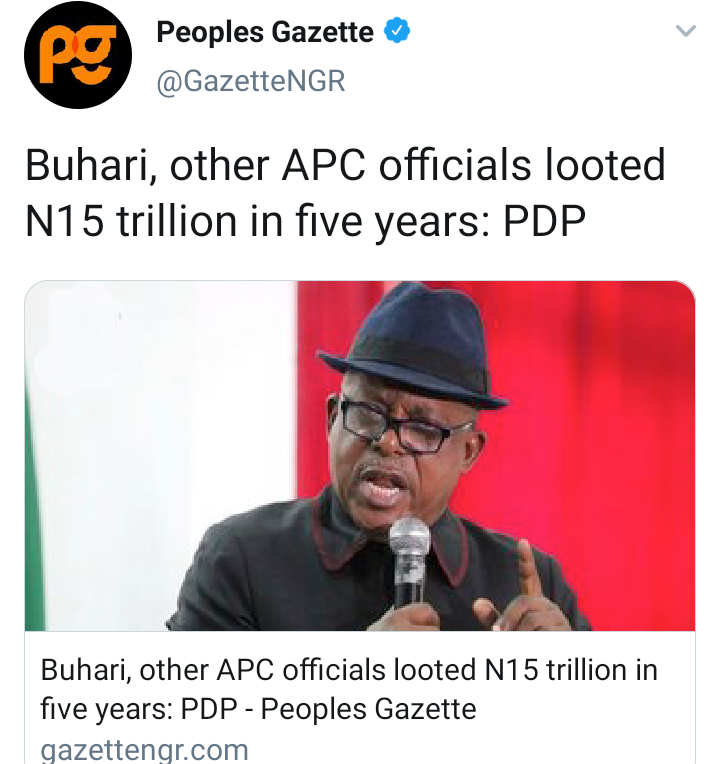 The PDP says the report by the NBS that no fewer than 21.7 million able bodied Nigerians have lost their jobs and means of livelihood while many more have become underemployed under the APC misrule further shows the despairing and despondent situation that APC and its administration has brought our nation.

administration, confirms that indeed, there is no hope in sight under

the Buhari Presidency and the APC.

incompetence as well as the widespread corruption and treasury looting in the Buhari administration, where APC leaders are reported to have looted over N15 trillion, which should have been used to create wealth, develop our country and provide jobs for our citizens

It is rather distressing that, as shown in the NBS report, that

unemployment rate among young and very enterprising Nigerians, within the age of 15 to 34 years, had risen to 42.5 percent; a revelation that put a lie to claims by the Buhari administration, of mass employment, job opportunities and economic empowerment of our youths.

Five political parties will take part in this Saturday’s bye-election into Ekiti East Constituency (1) of the State House of Assembly.

INEC Electoral Commissioner (REC), Dr Adeniran Tella, made this known in Omuo Ekiti, headquarters of Ekiti East Local Government of the state on Tuesday at a Stakeholders meeting, organised by INEC, preparatory to the exercise. 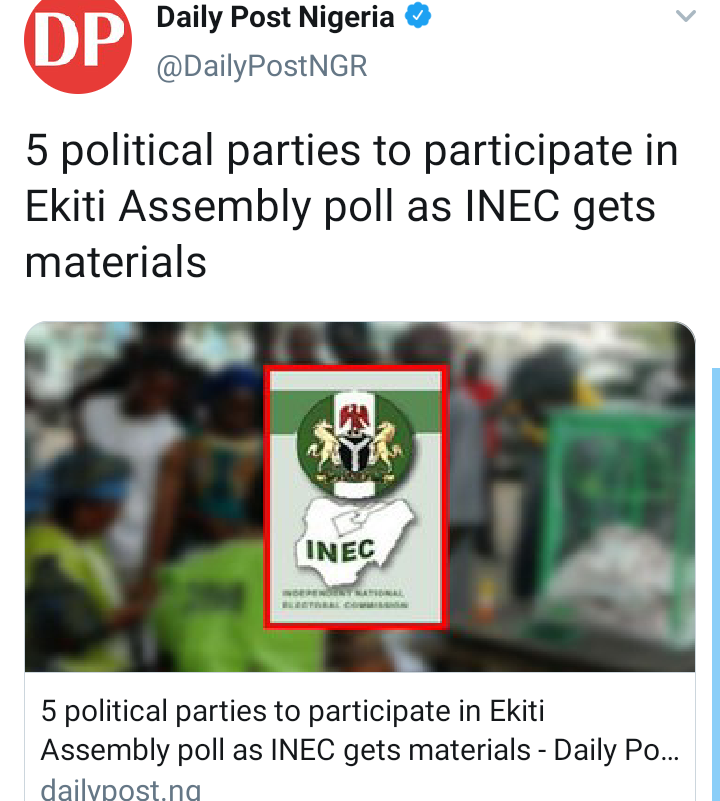 The News Agency of Nigeria (NAN) reports that the bye-election is coming following the recent death of Mr Juwa Adegbuyi, the member representing the Constituency in the Assembly on the platform of the ruling APC in the state.

Names of the political parties were given as AA, APC, APGA, PDP and YPP.

Representatives and candidates of the parties have consequently signed a peace accord to abide by the outcome of the exercise.

Representatives and candidates of the five parties, endorsed the documents at the stakeholders meeting organised.

Addressing the gathering, the State Resident Electoral Commissioner assured people of the constituency that their votes would count and called for their cooperation to ensure violent free bye election.

The Kaduna State Government on Tuesday, said troops of Operation Thunder Strike reported that two armed bandits were neutralized at “Five-Thirty” village in Chikun Local Government Area of the state.

The governnent confirmed this in a statement on Tuesday by Samuel Aruwan Commissioner, Ministry of Internal Security and Home Affairs, Kaduna. 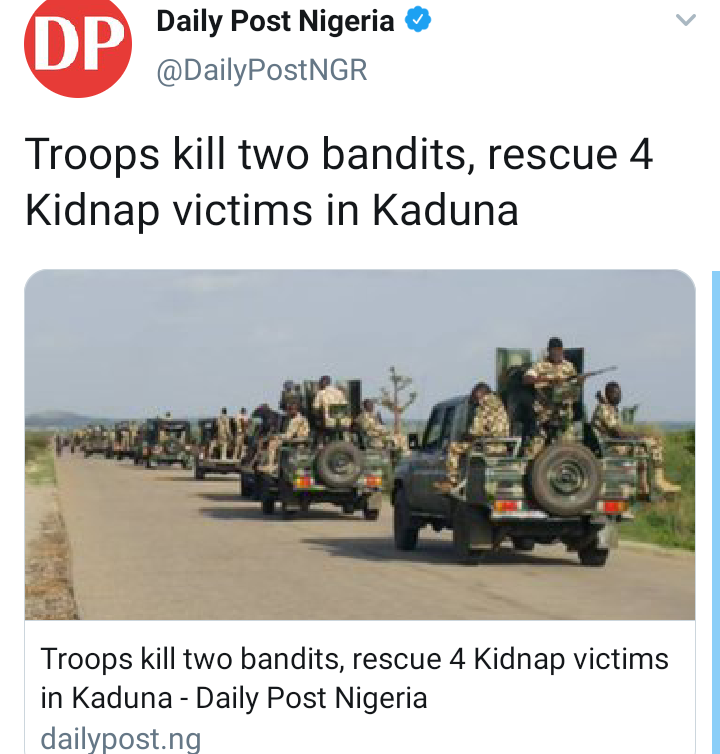 “According to the report, this followed the attempted kidnap of four women from the village by the armed bandits.The troops responded to a distress call and mobilized swiftly to the area to engage the bandits. Following a gunfight, the bandits abandoned the captives who were then able to escape,” the statement said.

According to Aruwan, “After the skirmish, the corpses of two bandits were recovered, with the others having escaped with possible gunshot wounds.

“One soldier sustained a bullet injury to the face during the exchange, and is recuperating in hospital.

“Governor Nasir El-Rufai received the report with thanks. He commended the troops for the successful interception of the bandits and the rescue of the kidnapped women. He wished the injured soldier a quick recovery, ” the statement added. 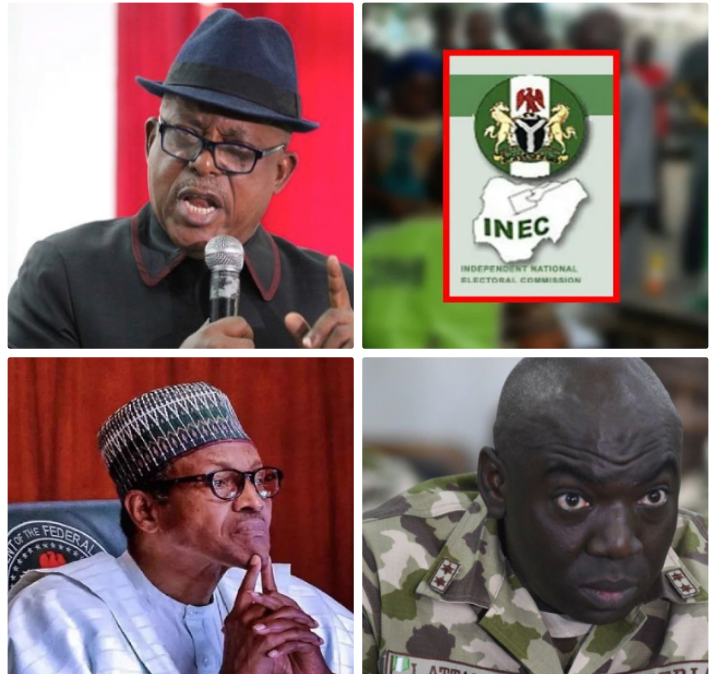