By bfournews (self media writer) | 8 months ago

The Ooni of Ife, Oba Adeyeye Ogunwusi Ojaja II, has regretted the detention of Yoruba Nation agitator, Sunday Adeyemo aka Sunday Igboho, in the Benin Republic. 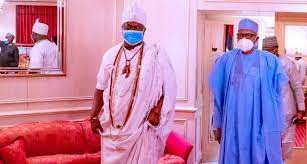 In an interview with BBC, the monarch said the agitator rejected advice offered him by monarchs sent to dialogue with him. Ooni narrated that he met the President, Major General Muhammadu Buhari (retd.), over Sunday Igboho.

According to the monarch, during the meeting, Buhari was informed of the reasons for Igboho agitation. Buhari is believed to have responded by saying that Igboho must remain calm and patient.

The president also requested that monarchs in the South-West counsel Igboho against illegal actions. The king, who stated that Igboho have a legitimate reason to fight, admitted that he should have been more diplomatic.

He claimed that politicians misled Igboho, stressing that the activist deserved the support of the region's kings. On his part, Ooni said he had forgiven Igboho and already working to get him freed from detention in the Benin Republic. Other Yoruba Nation agitators, he suggested, should consider discussion.

He claimed that he has always advised the authorities to convene a meeting with the agitators. Sunday Igboho was born and raised in Ife. It was from Ife that he grew into the man he is today. He fought the Ife and Modakeke war and both lands belong to Ife. He is a son of the soil.

He desired to fight for his people. He spoke up and advocated for the Oke Ogun victims. We are grateful to God for saving his life. He did his best, but he was overwhelmed by conflicting counsel. Many people gave him bad advice. Ooni stated that Igboho listened to them.

Content created and supplied by: bfournews (via Opera News )