The Crisis Between Jukun and Tiv in Taraba State, The Current Situation of Things

By NewsNigeria (self media writer) | 1 year ago 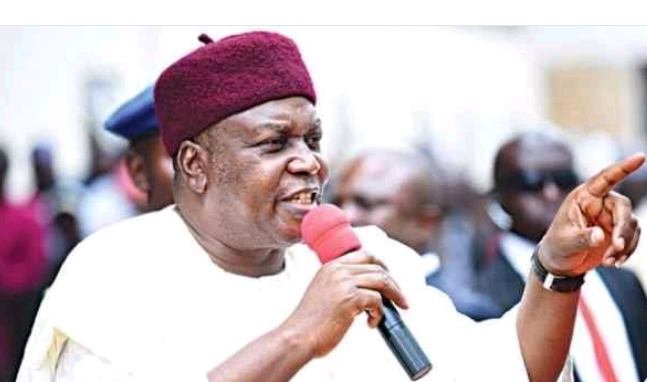 has become pertinent for us to address you again on the crisis between Jukun and Tiv in Taraba State as the crisis persist without government effort to calm the situation down. It has also become necessary for us to make this press briefing due to the governor's utterances while receiving a group Tiv political appointees in government house Jalingo on 18th June, 2020. And wish to make our position as follows:

1. That governor Darius Ishaku is the chief architecture of the crisis between Jukun and Tiv in Taraba State supported by Gen. T. Y. Danjuma and Aku Uka of Wukari and we wish to advice him to stop acting like someone who does not know the cause of the crisis and who is behind it.

2. The Tiv people of Taraba are very peaceful and have been living in peace all along with their neighbour except the Jukun who fees the Tiv must leave Taraba State, the Jukun agenda that stair-up the current crisis in Kente.

3. The Tiv people voted for Darius Ishaku in 2015 and 2019 and other PDP aspirants ignoring their own children who contested in other political parties, they were not doing this to go and stay in IDP camps, so the governor should not take the creation of IDP camps as an achievement under his government, the creation of the IDP camps is a sinister to us.

4. The sinking of boreholes in the IDP camps is also an indication that the Governor is not ready to end the crisis, how many of these boreholes were sank by the governor in Tiv communities in his first regime? To us is another sinister.

5. Darius Ishaku should not attribute his failed government to the Tiv, the Tiv people have never stopped you from developing the state, rather you don’t have a single project at heart when you were contesting for the position of the governor, what have you done in your first tenure? What happens to the local governments that were not engulf by the crisis? The road linking you home town Takum was constructed by Danbaba Suntai. What happens to Zing, Yorro, Jalingo, Ardo-Kola, Kurmi, Ussa, Bali, that stop you from developing them? Why don’t you develop central and northern Taraba to show to us in the south that we are responsible for the underdevelopment in the region? You are a FAILED governor. Many Tarabans are now questioning your profession as an architect.

6. That the crisis between Jukun and Tiv in Taraba State has nothing to do with Benue border with Taraba, it is mischievous for Darius Ishaku to say he has been discussing with Samuel Ortom of Benue State concerning the crisis and how to demarcate Benue and Taraba border, you are do i g this to divert the attention of the public on the real issues.

7. Why should Darius Ishaku disagree with Samuel Ortom on setting up a commission of enquiry that was suggested by Ortom? Darius Ishaku said the crisis between Jukun and Tiv in Taraba State is an internal problem that he is capable of handling and does not want strangers to be involved in the management of the crisis, the question is when has Ortom and Engr. A. A. Sule became indigenes of Taraba State to be discussing the Jukun and Tiv crisis in Taraba State?

8. If the crisis was a border issue a commission of enquiry was the best option, Darius Ishaku has also forgotten that Bali, Gassol , Ibi, Kurmi and Donga did not in any way share border with Benue State, can the governor tell Tarabans and Nigerians at large what is happening with the Tiv in the above mentioned local governments Where your militias are killing Tiv on a daily basis?

9. What happens to the committees reports you have set since the beginning of the crisis, have they been submitting these reports without recommendations? What have you done with those recommendations?

10. Can Darius Ishaku tell Tarabans why the eviction of Tiv out of Kurmi was not successful and why the Tiv in Bali are now returning to their ancestral homes? While the Tiv in southern Taraba are still in their IDP camps? There are so many questions and so much work for you to prove that you are not responsible for our alienation. You are a failed governor, we will remember you for the killing fields you have created in Taraba State.

11. That Darius Ishaku has not visited southern Taraba since February, 2019, can you tell Tarabans and Nigerians at large why you have decided to abandon your region at a time they needed you most? If the governor of Borno can visit a Boko Haram zone to sympathize with his people, if governors can visit accidents victims, why can’t you visit southern Taraba for once to show them that you care about them?

12. Holding of Kangaroos meeting with no substance is not enough to show that you want to end the killing of Tiv in Taraba State, you are not sincere in all your peace accords, the blood of our great grand parents, our fathers, mothers, uncles, sisters, voters and most importantly the innocent Tiv travellers that have been slaughtered since the beginning of the crisis shall continue to follow you all the days of your life in Jesus mighty name.

Content created and supplied by: NewsNigeria (via Opera News )