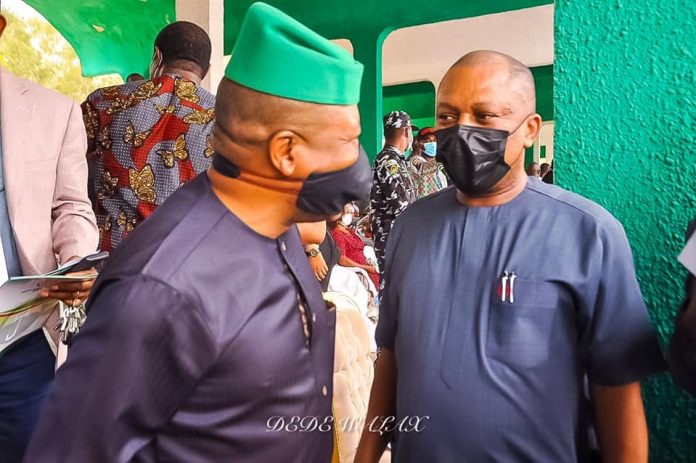 Former Governor of Imo State, Hon Emeka Ihedioha and Senator Samuel Anyanwu may have forgone whatever political feud they had in the past, as the ex governor has openly backed Anyanwu's nomination as National Secretary of the Peoples Democratic Party, PDP.

Madu Chinemerem, a former national official of the PDP, had claimed that Ihedioha and other leaders of the PDP from the South East geo political zone such as former governor of Anambra State, Peter Obi and former Imo State governor, Achike Udenwa were against Senator Anyanwu’s nomination.

Ihedioha in a statement on Monday signed by his media aide, Mr. Chibuike Onyeukwu, denied Mr. Chinemerem's claims, saying he is not averse to the nomination of Senator Samuel Anyanwu as consensus candidate of the South East PDP for the position of National Secretary of the party.

The former governor, according to the statement, stated that he had met Senator Anyanwu, a day after the critical PDP South East Stakeholders meeting where he (Anyanwu) was nominated for the PDP national scribe job.

Aside the press statement by Ihedioha's media aide to dispel any disagreement with Senator Anyanwu, an aide of Ihedioha, Mr. Aic Akwarandu, partly wrote on facebook, that former Secretary to Imo State government, Hon. Uche Onyeagocha accompanied Senator Anyanwu to submit his nomination forms at Wadata Plaza, Abuja, as a contestant for the post of national scribe of the party.

Ihedioha and Anyanwu had vied for the governorship ticket of the PDP in Imo State in 2019.

The latter lost the contest, alleging manipulation of the governorship primary to favour the former Deputy Speaker, House of Representatives.

He challenged his loss in court, up to the Supreme Court which ruled in favour in Ihedioha.