Trump: "We must protect Federal property and our people. These people were not merely protesters."

By Ebukajp (self media writer) | 2 years ago

The embattled United States President, Donald Trump has once again spoken. This time around he spoke based on the ongoing protest going on in Portland, a city in United States. People had already alleged that President has bad intention by sending troops to the said place. 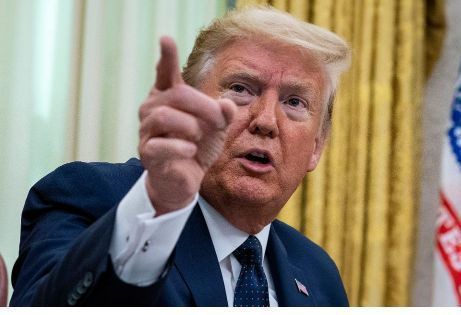 President Trump further notified them that all he was trying to do was to help Portland and not to hurt it. President Trump who stated it clearly that the leadership of the said place has lost control of the anarchists and agitators in that particular area, and that was the reason why he decided to send federal troops to the said place.

He ended his tweet by making it clear that they must protect all the Federal property and the people in that area. He aswell made them to understand that those protesters are not just protesting but they have an interior motive behind what they are doing.

The full tweet made by President Trump could be seen below here. Just as the United States presidential election is just few months away, people are doing everything possible to pull him down by leveling several allegations on him which has openly debunked.

He was earlier alleged to be a racist but he did something that has never happened in the history of the United States before. He appointed a black American to become a service chief. By doing that, he has proven that he is not a racist in anyway.

The United States Election comes up in November, let's keep our fingers crossed and watch what the outcome will be.