By Waterforyou (self meida writer) | 15 days

US House Passes Bill To Prevent Another ‘Muslim Ban’

The US House of Representatives has passed a bill that would limit the ability of any United States president to impose a travel ban on the basis of religion, a move that was welcomed by civil rights advocates as “a major step forward”. 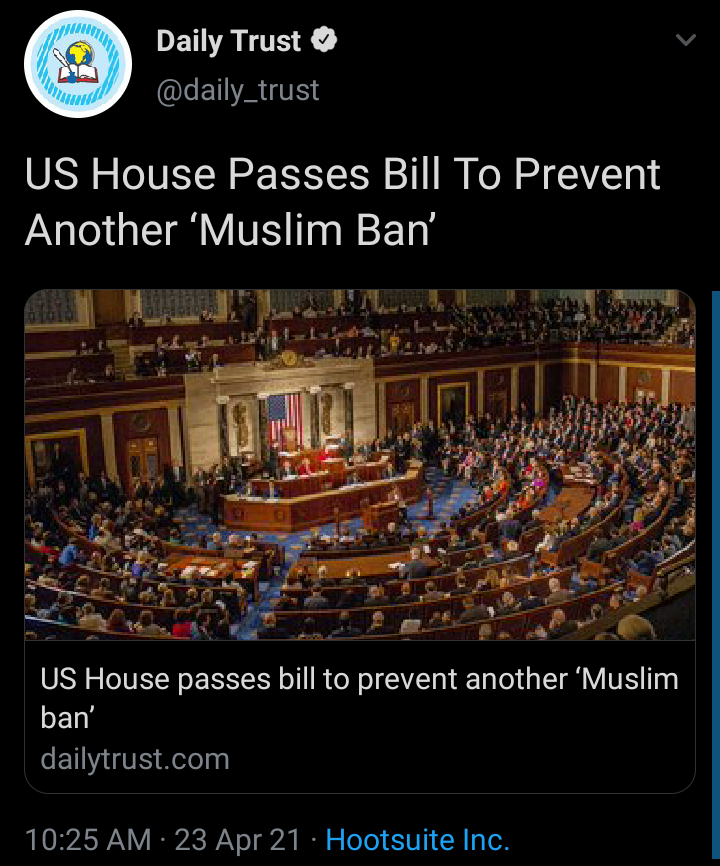 The legislation, known informally as the NO BAN Act, comes in response to former President Donald Trump’s controversial “Muslim ban” that barred travel to the US from several Muslim-majority countries.

The bill, which must also pass in the US Senate to become law, was approved by a 218-208 vote in the House on Wednesday.

President Muhammadu Buhari has warned bandits that his administration has the capacity to crush them and wipe them out. 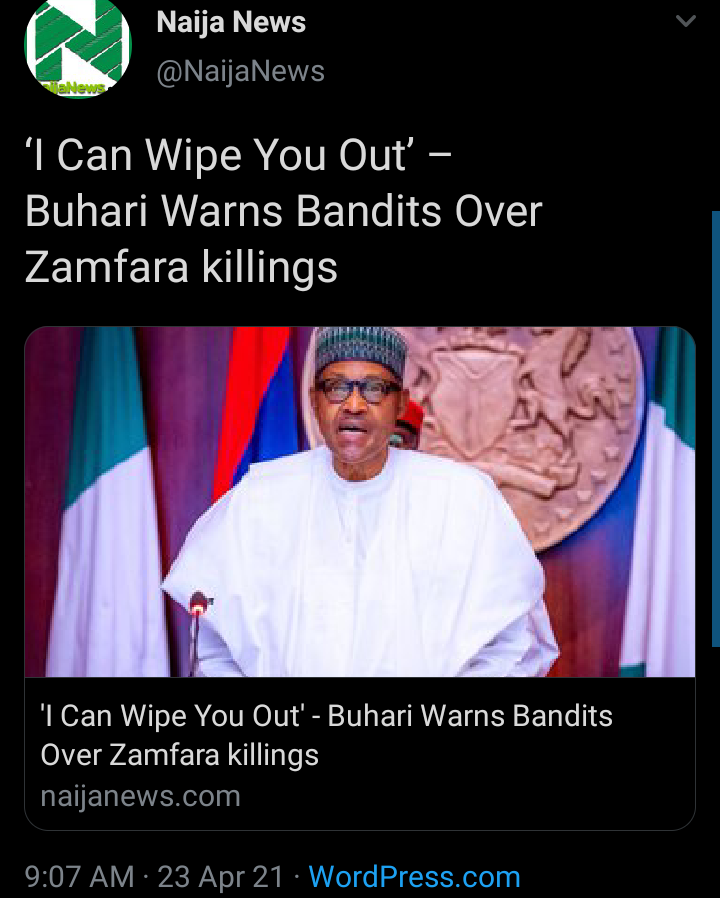 Naija News reports that more than 60 people were killed in attacks on Gobirawa, Rini, Gora, and Madoti Dankule in Bakura and Maradun LGAs in Zamfara State.

It was gathered the bandits invaded the communities on Wednesday on motorcycles and shot sporadically before killing the residents.

But in a statement on Thursday by his spokesman, Garba Shehu, President Buhari condemned the killings of residents of the communities by bandits.

He reassured residents of the state of his administration's determination to defeat the enemies, despite the latest setback.

The statement reads: "The insane and persistent violence against innocent people must stop", adding that "such wanton disregard for life will be brought to an end sooner than later".

Operatives of the Nigeria Police Force and other security agents prevented a jailbreak by inmates of Kurmawa prison, located around the emir's palace in Kano State. 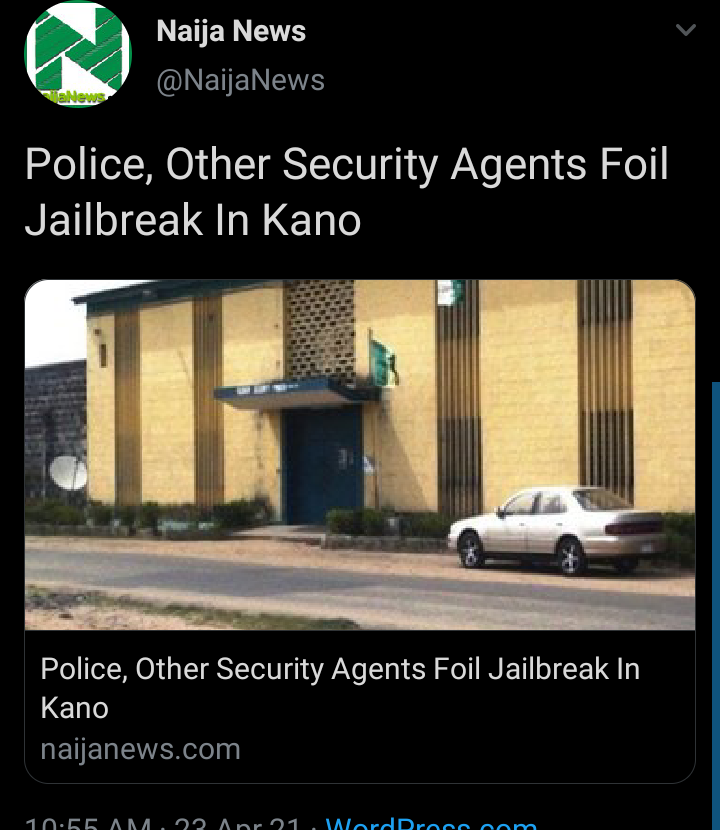 Sporadic gunshots were heard within the area where the prison is located, as residents prepared to break their Ramadan fast on Thursday evening.

Spokesman of the Nigerian Correctional Service in Kano, Musbahu Nasarawa, confirmed the incident, adding that the inmates attempted to cause pandemonium but were resisted.

"We have put down the rebellion through the concerted efforts of the prison officials," the spokesman said.

Nasarawa explained that violence broke out when prison officials attempted to retrieve illicit items found with some of the prisoners.

Unconfirmed reports had initially claimed that the commotion was the result of the poor quality of food the prisoners were served when they wanted to break their fast on Thursday.

SURVIVORS of the latest Boko Haram attack in Kwapre village and adjoining communities of Hong Local Government Area of Adamawa State now live in shock and fear after the latest attack on them by Boko Haram terrorists. 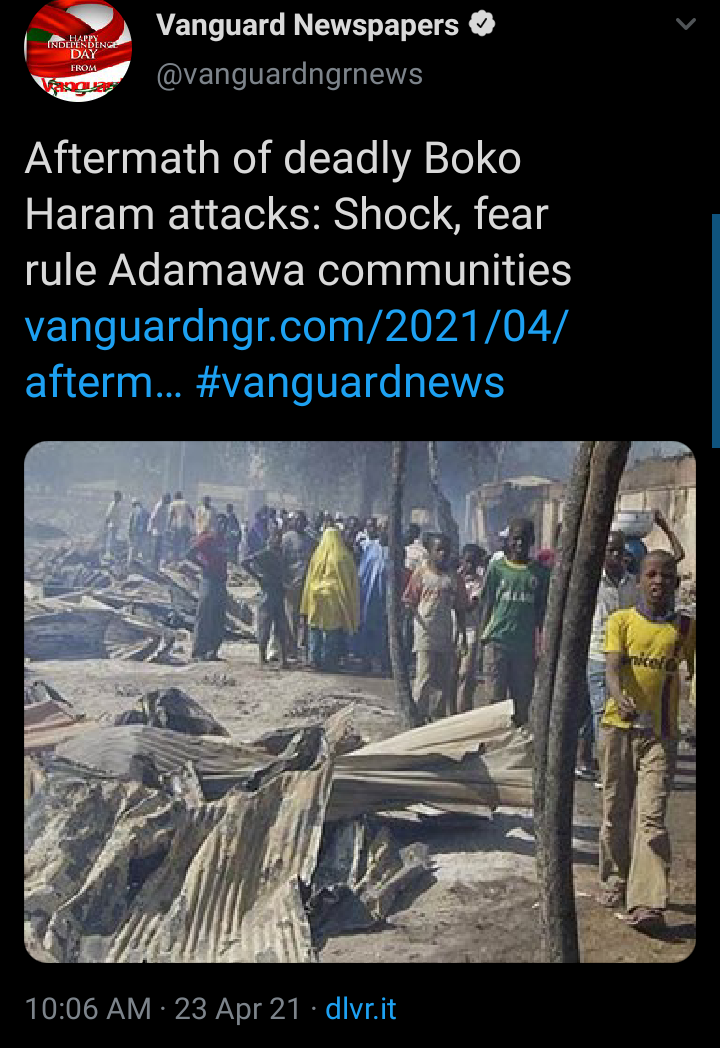 In the onslaught, no fewer than 11 members of the community were killed, with 34 others yet to be found. About 5,000 others have been displaced from their homes by the attackers and are now forced to take refuge at Kwapre Central Primary School in the LGA.

The attack has also elicited the sympathy of the Presidency, which immediately dispatched the Secretary to the Federal Government, Boss Mustapha, an indigene of the state, to the affected community to have an on-the-spot assessment of what happened.

Two suspects have been arrested by the Oyo State Police Command for their alleged involvement in cultism and robbery. 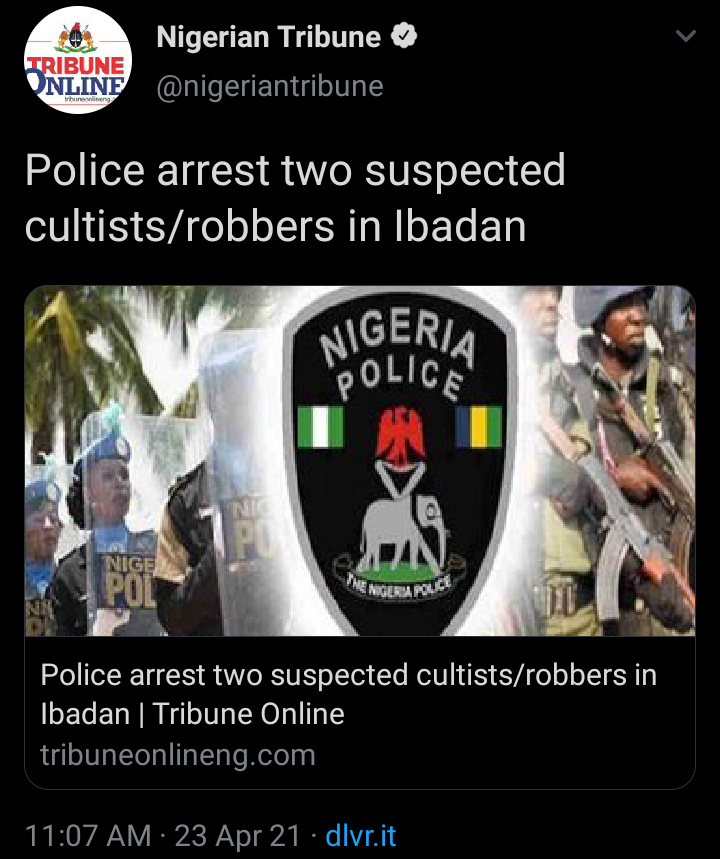 They were arrested at Bodija Oju Irin, in Ibadan last Saturday by men attached to the 39 Police Mobile Force (PMF) during a stop-and-search while on patrol.

Content created and supplied by: Waterforyou (via Opera News )

Adamawa Buhari Muslim NO BAN Act US House of Representatives

"We Beat Him To Death For Stealing Our 3K, Phones - Suspects

Prophet Jeremiah Edet Reveals What God Told Him About Adeboye, Oyedepo And Other Men Of God