Chief Dan Orbih, the South-South zonai Chairman of the People's Democratic Party, has exposed why it is more likely for Governor Godwin Obaseki in the September 19 Gubernatorial Election of Edo State.

Orbih, on Wednesday, said the alleged reason while Obaseki will emerge as the winner of the forthcoming election is his outstanding performance in the last four years.

Orbih stated that Governor Obaseki has top-notch achievements for Edo state that beats the past record.

He boasted with full optism that victory is more than "most likely" for Obaseki in the forthcoming election.

He remarked that Obaseki, by all standards has more achievements and performance than his predecessor, in terms of delivering the dividends of democracy to the state.

The PDP chieftain also added that the September 19 Election will be a poll for emancipation of Edo people from the grip of godfatherism. 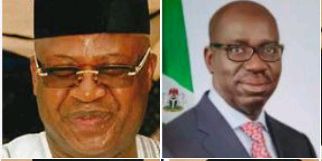 Meanwhile, PDP has rolled out the drum of playback of all what the former National Chairman of All Progressives Congress (APC), Adams Oshiomhole said in support of Obaseki four years ago, and all his denigrative words against Osagie Ize-Iyamu who is now the Gubernatorial candidate of APC after defection.

This is one of the political outbursts of PDP to appeal to the psyche of the Edo electorate to vote en masse for the PDP, come September 19.