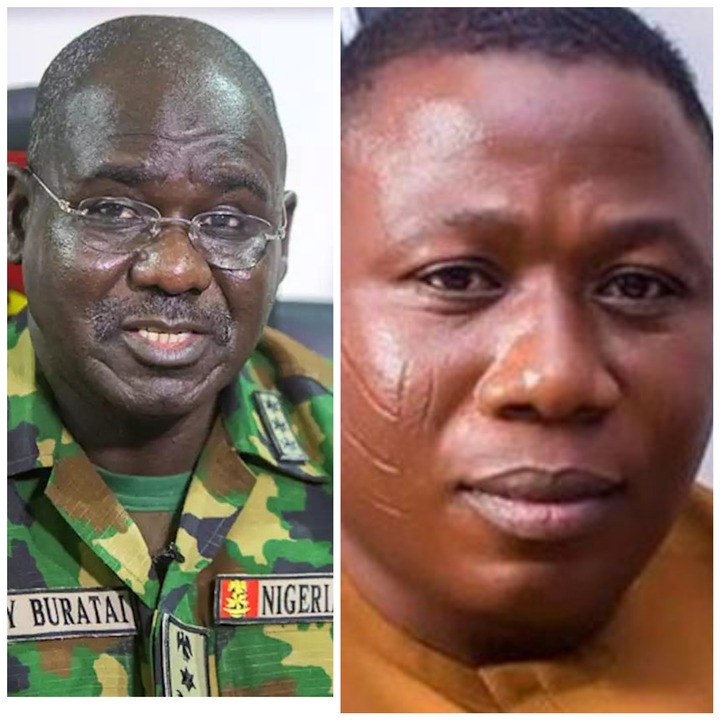 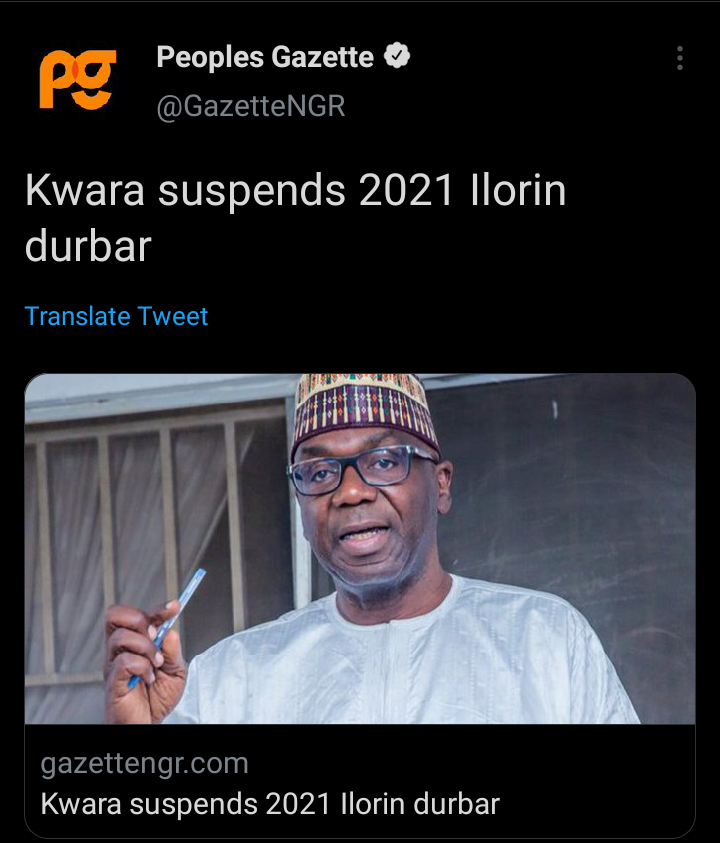 For security reasons, the Kwara administration has cancelled this year's Eid durbar, which was originally set for Wednesday (today).

Rabiat Abdulrahman, a permanent secretary in the state's communications ministry, announced the cancellation in a statement.

This was revealed by the Kwara government in Ilorin on Tuesday night.

“The suspension, as painful as it is given our people's attachment to it and the government's investments to promote this colorful cultural heritage,” the statement said. “The suspension follows a police intelligence report that indicated that some forces plan to use the boisterous nature of the cultural event to instigate a breakdown of law and order in the state, thereby complicating national security challenges.” 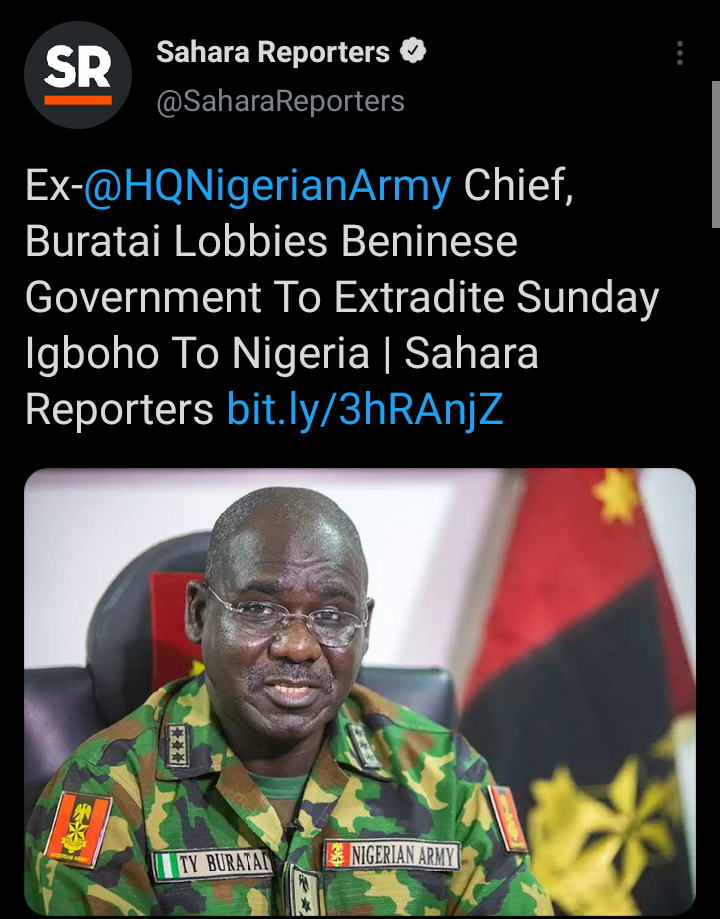 Lt. Gen. Tukur Buratai (retd.) of the Nigerian Embassy in Benin is at the forefront of the Muhammadu Buhari administration's urgent efforts to extradite Yoruba nation campaigner Sunday Adeyemo, aka Igboho, to Nigeria.

Buratai, who was appointed Nigerian envoy to Benin in June 2021, was also involved in the arrest of Sunday Igboho, according to SaharaReporters.

Buratai had secretly written a letter to Beninese security agencies ordering them to arrest Igboho wherever they located him, according to a top security source in the Benin Republic.

"Right now, Buratai is coordinating with various Nigerian officials and lawyers, as well as Interpol, to guarantee that Igboho is returned to Nigeria as soon as possible. According to a source, he wants to make that his first success. 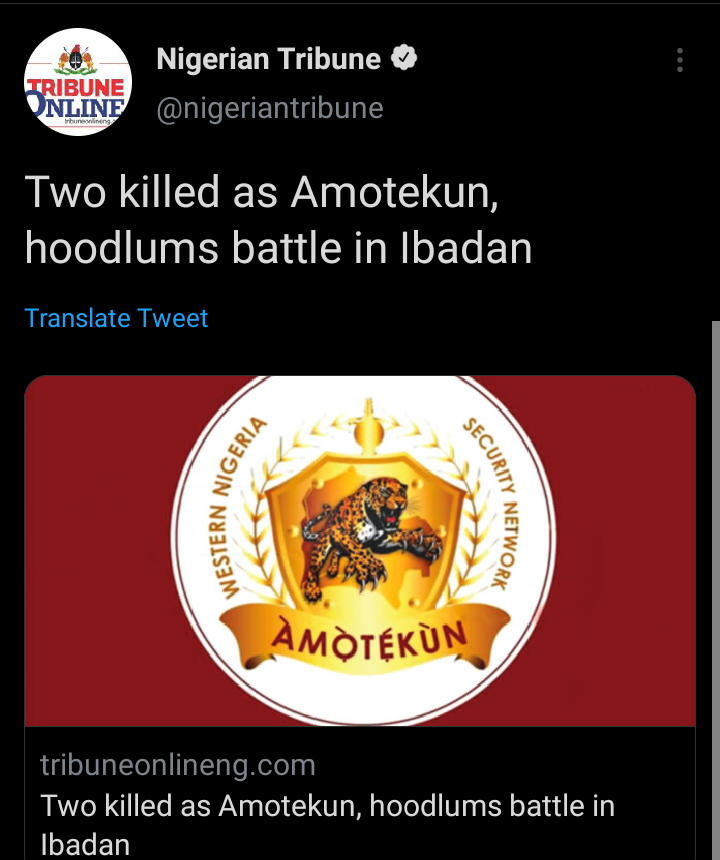 Officers of the Amotekun Corps shot and killed two persons in the Oke-Ado district of Ibadan, Oyo State, in the early hours of Tuesday, while one other was injured.

Ishola Abdullahi and Rasheed Mudashiru were recognized as the deceased, while Alaba Isah was named as the injured.

According to Ibrahim, Abdullahi's younger brother, who spoke to the Nigerian Tribune about the incident, youths in the neighborhood decided to gather at the Ajanla area, near the Liberty Stadium junction, to honor the eve of the Sallah holiday.

"There was no squabble or brawl. We were all young males from the neighborhood, having a good time on Sallah eve. Soldiers and police officers greeted us as they passed by. On the J-Allen/Molete Road, the Amotekun van approached from the Liberty Stadium intersection. When we heard the gunshots, we all ran in different directions. 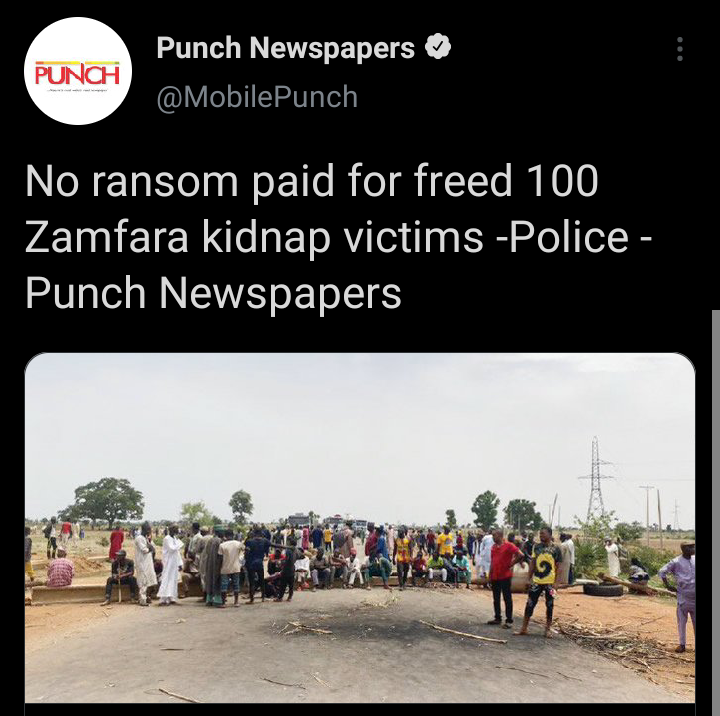 The Zamfara police headquarters claims it did not pay a ransom to the bandits in exchange for the release of 100 children, nursing mothers, and others who had been kept captive for 42 days.

At Kabaro forest in Maru local government district, the abducted victims were freed by the bandits.

On Tuesday, a spokesman for the police, Muhammad Shehu, issued a statement in Gusau.

Mr Shehu explained that the police were involved in the release of the children, mothers, and others, as well as the Zamfara Ministry of Security and Home Affairs.

Mr Hussaini Rabiu, the state Commissioner of Police, has warned stubborn bandits that until they give up their illegal activities and embrace peace, they will face the full force of the law.