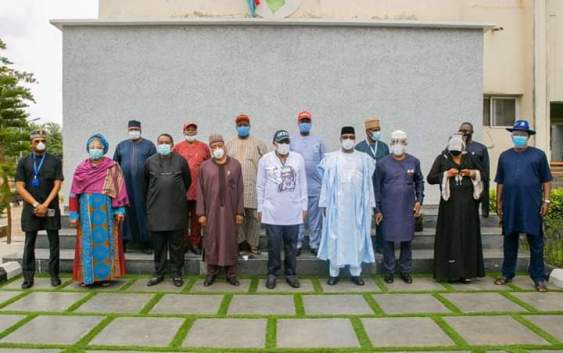 Ondo State Governor, Oluwarotimi Akeredolu, SAN, today received in his office, the Reconciliation Committee of the All Progressives Congress (APC) for the state, led by the Governor of Niger State, Abubakar Bello.

The committee, which was set up by the APC Caretaker/Extra Convention Planning Committee, is in the state to meet with leaders and members of the party in the state.

Akeredolu said: “In our short time here as servant of the people, we have tried to do our best. Not because we are the best, but because God has allowed us to do it. I’m confident and I give all glory to God.

“I want to assure you that this is a safe state for APC. We will win this state, except we come with shenanigans and today, it is a thing of the past. In a free and fair primary, we will win.”

Speaking on his efforts in the development of the state, Akeredolu said: “We have an industrial hub now, we have over six industries working. Other than Ajasin in 1979, no one has added industry to this state.

“We came, there was carnage on our road in Ore and people usually die at a cross section there. We built a redemption bridge and puta permanent end to the carnage. In Akure here, we have done massive infrastructure. APC has done wonders in this state. The people of this state know. APC will win this state any day, any time,” the governor said.

Earlier, the Chairman of APC Ondo Reconciliation Committee and Governor of Niger State, Abubakar Bello said the main objective of the committee in the state is to reconcile party members and all APC faithful.

The Niger State Governor, who described Akeredolu as a performer, said the success of the party in the next election is paramount, stressing that the reconciliation committee was set up for the purpose of ensuring the party success in the state.

As gathered the Committee is currently meeting with some APC chieftains such as former Deputy Governor, Alhaji Alli Olanusi as well as three out of other 11 governorship aspirants namely: Engr Ifeoluwa Oyedele; Barr Bukola Adetula and Ambassador Sola Iji.

Other aspirants such; Hon Isaacs Kekemeke, Dr Olusegun Abraham, Chief Olusola Oke, Mrs Jumoke Anifowose-Ajasin, Chief Olayide Adelami among others are yet to arrive the venue of the peace meeting as at 3:30pm today.

The meeting is holding at a popular Hotel in Akure.