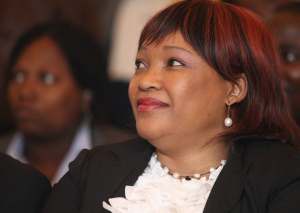 anti-apartheid and South Africas first black president, Nelson Mandela's, youngest daughter, Zindzi Mandela, is dead at the age of 59. This was made known on Monday by South Africa's president, Cyril Ramaphosa and family members.

Ramaphosa made it known that Zindzi Mandela, passed away in a Johannesburg hospital on the 13th of July 2020. The cause for her death was not immediately revealed, however she was South Africas ambassador to Denmark at the time of her death.

After her stay in Copenhagen, she was meant to become South Africa's envoy to Liberia. Born in the state of Soweto and partially educated in Swaziland (a nearby country), she grew up while her father was being incarcerated for 27 years.

She was an active member of the African National Congress (the ANC), and was also involved in the liberation struggle just like her parents. In 1985 she read out her father's letter of rejection of release where the then apartheid president offered to release Nelson Mandela, if the latter was ready to renounce the anti-apartheid protests and violence.