Check Out Osama Bin Laden Decision, And His Picture As A Baby Boy.

Every child has the freedom to chose what they want to be when they grow up. But unfortunately, only few persons accomplish their childhood goals due to one reason or the other. 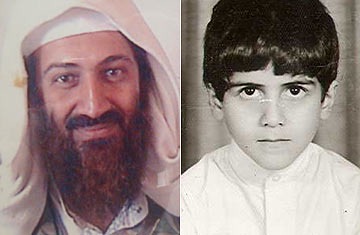 As a child, you make decisions like what you will study in the university, where you will like to work, what you will like to be in future, and so on. But because of factors such as psychological, religious, political, cultural factors you tend to change your childhood goals. Some case are due to influence, this make some person focus on the trivial.

Osama Bin Laden decided to become a terrorist; In 1988, bin Laden created a new group, called al Qaeda that would focus on symbolic acts of terrorism. For bin Laden, Islam was more than just a religion: It shaped his political beliefs and influenced every decision he made. While he was at college in the late 1970s, he became a follower of the radical pan-Islamist scholar Abdullah Azzam, who believed that all Muslims should rise up in jihad, or holy war, to create a single Islamic state.

Check out Osama Bin Laden's picture; as a baby and as a boy. Children are are always cute, but when they grow up they become something else. Note: Let's try to make a good decision in our life, accomplish your childhood goals, live happily, and most importanly to avoid conflict.