The story of Sahabah Treated with Suratul-Fatiah When He has physical ailments, See the work God

By Layi-Muhammed (self media writer) | 2 years ago 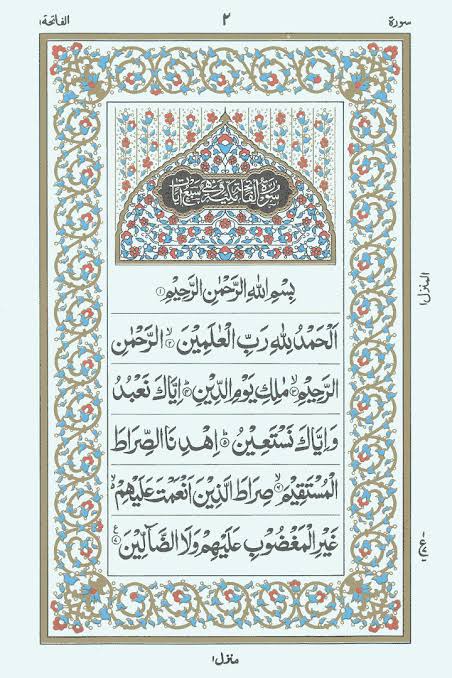 The beauty of Quran, when it starts with Fatihah and ends with the valuable last 3 Surah. Fatihah is the medicine for all diseases, including spiritual and physical ailments.

The story of Sahabah when they treated the tribe's chief with Fatihah reflects the following:

1. Prophet Muhammad Sallallaho Alaihe Wasallam allowed Sahabah to take wages on reciting Fatihah as Ruqyah, and when he said to keep his share, he only wanted to encourage Sahabah that what they had done was correct, depending on the condition that the tribe had refused to give them shelter.

2. Quran and Fatihah are the medicine even for Non-Muslims.

Can you understand the fact, why Fatihah is made compulsory to be recited in every Rak'ah of every prayer.

In the Sahihain, Tirmizi, Ibn Majah and Ahmad, it is narrated that Abu Said Al-Khudri Radi Allaho Anh said, "Some of the Sahabah (companions) of Prophet Muhammad Sallallaho Alaihe Wasallam went on a journey till they reached some of the Arab tribes (at night).

They asked the latter to treat them as their guests but they refused. The chief of that tribe was then bitten by a snake (or stung by a scorpion) and they tried their best to cure him but in vain.

Some of them said (to the others), ‘Nothing has benefited him, will you go to the people who resided here at night, it may be that some of them might possess something (as treatment).’ They went to the group of Sahabah (companions of Prophet Muhammad Sallallaho Alaihe Wasallam) and said, "Our chief has been bitten by a snake (or stung by a scorpion) and we have tried everything but he has not benefited.

They agreed to pay them a flock of sheep. One of them then recited (The chapter Al-Fatihah): ‘All praises are for the Lord of the Worlds’ and puffed over the chief who became right as if he was released from a chain, and got up and started walking, showing no signs of sickness. They paid them what they agreed to pay.

Some of them (i.e., the Sahabah) then suggested dividing their earnings among themselves, but the one who performed the recitation said, do notdivide them till we go to Prophet Muhammad Sallallaho Alaihe Wasallam and tell the whole story to him, and wait for his order.

So, they went to Allah’s Messenger and narrated the story, Allah’s Messenger asked: “How did you come to know that the chapter Al­-Fatihah could be recited as an Islamic prayer formula?” Then he added: “You have done the right thing. Divide (what you have earned) and assign a share for me as well.”

It is a well-known fact that certain types of speech have a profound effect and benefit that experience testifies to.

So how about the Words of the Lord of the Worlds that are as preferred to the creations speech as Allah Is preferred above His creation? Allah’s Words contain the ultimate cure, the perfect immunity, correct guidance and an encompassing mercy, that if it was revealed to a mountain, it would turn to dust in appreciation of Allah’s Glory.Allah Said:

"And We Send down the Quran; that which is a healing and a mercy to those who believe (in Islamic Monotheism)".

"Allah Has Promised those among them who believe (i.e., all those who follow Islamic Monotheism, the religion of Prophet Muhammad Sallallaho Alaihe Wasallam till the Day of Resurrection) and do righteous good deeds, forgiveness and a mighty reward (i.e. Paradise)"

What could one think of the opening of the Quran (Al-Fatihah, the first chapter) that is not comparable to any Verse or chapter revealed in the Quran, the Torah, the Gospel or the Zaboor (that was revealed to Prophet Dawood Alaihess Salaam).

Al-Fatihah contains the general meaning of all the Divine Books Sent down by Allah. It contains Allah’s Names and Attributes, such as Allah, the Rubb (Lord), Ar-Rahman (Most Merciful) and Ar-Rahim (Most Beneficent).

It affirms Resurrection, Allah’s Oneness in Lordship, mentions the creation’s dependence on Allah’s Help and Guidance and that He Alone Grants such bounties.

Furthermore, it contains the best and most beneficial supplication that the creation needs; being guided to the Straight Path that entails acquiring knowledge of His Names and Attributes, worshipping Him alone, obeying His Commands, refraining from His prohibitions and staying firm on this path until death.

These are the camps that the creation is divided into. In addition, Al-Fatihah affirms Predestination and the Commandments of the religion, Allah's Names and Attributes, Resurrection and Prophet-hood.

It purifies the heart and mentions Allah’s Justice and Generosity. It also refutes all types of innovations and evil methods. Certainly, a chapter that contains all these virtues and benefits deserves to be used as a cure for disease, as well as an antidote for poisonous stings.

Indeed, Al-Fatihah is the best cure because it contains sincere servitude to Allah, praising Him, relating all bounties to Him, seeking His Help and support, and invoking Him for all types of advantages, such as the correct guidance that brings about benefit and fends off torment.

It was reported that the part in Al-Fatihah that contains the Islamic prayer formula is what Allah Said:

Indeed, these are the mighty powerful words that contain the strongest medicine packed in this chapter.

These words entail sincere dependence and reliance on Allah, seeking refuge and help from Him and showing meekness and need of Him. Consequently, these words contain the best goals to seek, which is worshiping Allah Alone.

In addition, they contain the best method to acquire these goals, that is, invoking Allah for His support so that one achieves these goals.

While I was in Mecca, I once fell sick and had no access to a doctor or medicine. So I used to seek a cure in The Fatihah by sipping a drink from the well of ZamZam that I recited the Fatihah on. I found complete cure in this method and I used to rely on it whenever I felt pain. This cure always helped me.

There is a wonderful secret in using the ­Fatihah as an Islamic prayer formula to treat poisons, and Allah Has Created a cure for every disease as we have stated. Venomous beasts have a special effect on their victims with their evil souls.

Furthermore, the weapon that the venomous beasts use is the needle that they attack with (to sting and inject the venom into their victims).

In this case, the victim will feel that his strength and resolve are enhanced with the Islamic prayer formula and the divine remedy, similar to the relation that exists between regular medicine and the sick person. In addition, the wetness and the air contained in the spit of the person who recites the Islamic prayer formula, that contains the supplication and the remembrance of Allah, will all enhance the chances of recovery.

Since the person who recites the Islamic prayer formula recites it with both his heart and mouth, then adding some of the air and moisture that exists inside his body through the spit will maximize the effectiveness, power and strength of the remedy. Certainly, this mixture of heart and soul used in the divine remedy works just as regular medicine works on the body.

In addition, the more strength of heart the person has, the stronger the Islamic prayer formula he recites becomes. There is another secret behind using spit in the divine remedy, which is used by the evil forces, just as Allah said,

"And from the evil of those who practice witchcrafts when they blow in the knots".

Those who work SEHR ~ sorcery tie some knots and blow onto them words of sorcery, which work on the victim although he or she might not be present. In this way, the evil force helps transferring the words of sorcery and their effect to the victim.

When the force for good retaliates by using the Islamic prayer formula and then breathing unto the victim, the more powerful of the armies in the WAR wins. War between good and evil forces resembles real war that occurs between people. The spiritual forces essentially use and enlist physical bodies in their wars against each other.

Whoever is only concerned about the material world will not feel any of this raging war since he is attached to the environment that he believes in, that is, the material world, and he is far away from the world of spiritual forces and their effect on mankind.

In short, when the good spiritual force is strong enough and feels the effects and the meanings contained in the Al-Fatihah, along with the breathing that accompanies reciting it, the Islamic prayer formula will have the intended effect against the evil forces and will thus remove their harmful effect. Allah Knows best.

Content created and supplied by: Layi-Muhammed (via Opera News )