According to the Yoruba's, Olodumare (God) is the supreme being. He is the creator of humans, nature, and other lesser deities. The name Olodumare comes from the three Yoruba words Oni, Odu, and Mare which means the owner of the source of creation.

The Yoruba believe that the lesser gods which are referred to as Orisha in Yoruba serve as an intermediary between Olodumare and humans. If they human desire anything, they will pray to the lesser gods (Orisha) they are worshipping and the Orisha will go to heaven and speak to Olodumare on their behalf. 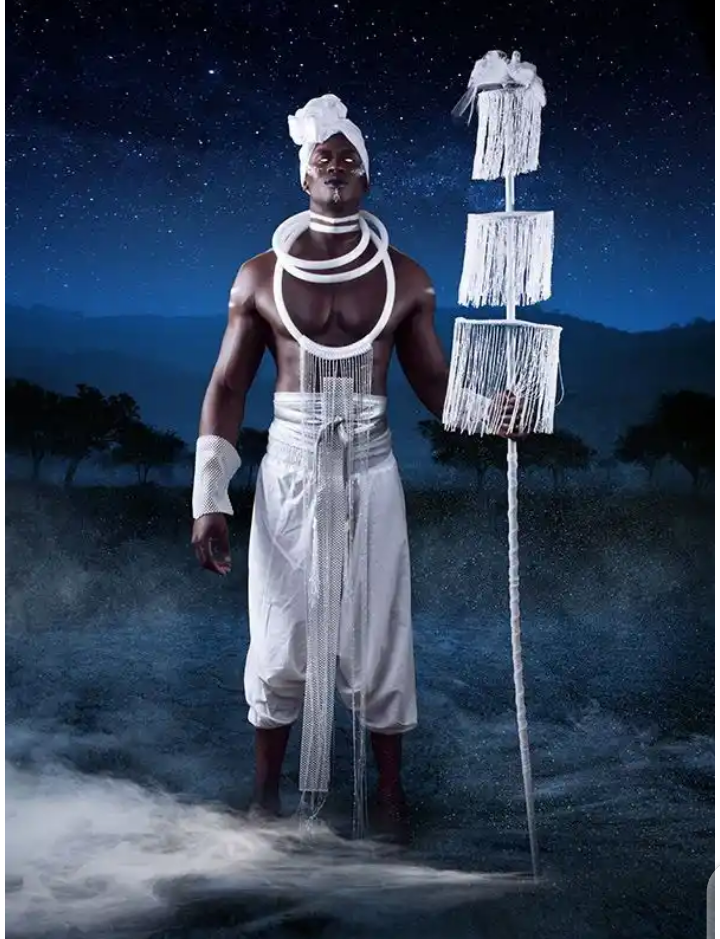 Obatala is the god of inner peace who represents peace, creativity, and purity. He is believed to be the Sky Father and representative of Olodumare on earth who serve as the father of all Orishas and the creator of human bodies.

The bodies created by Obatala are brought to life by the breath of Olodumare. He has served as the King of Ife but was usurped by his brother Oduduwa on the night of the day he was drunk.

Obatala symbols are a silver bracelet, Horsetail-fly-whisk (Irukere), a cane, and silver bell. His color is white and it signifies purity. 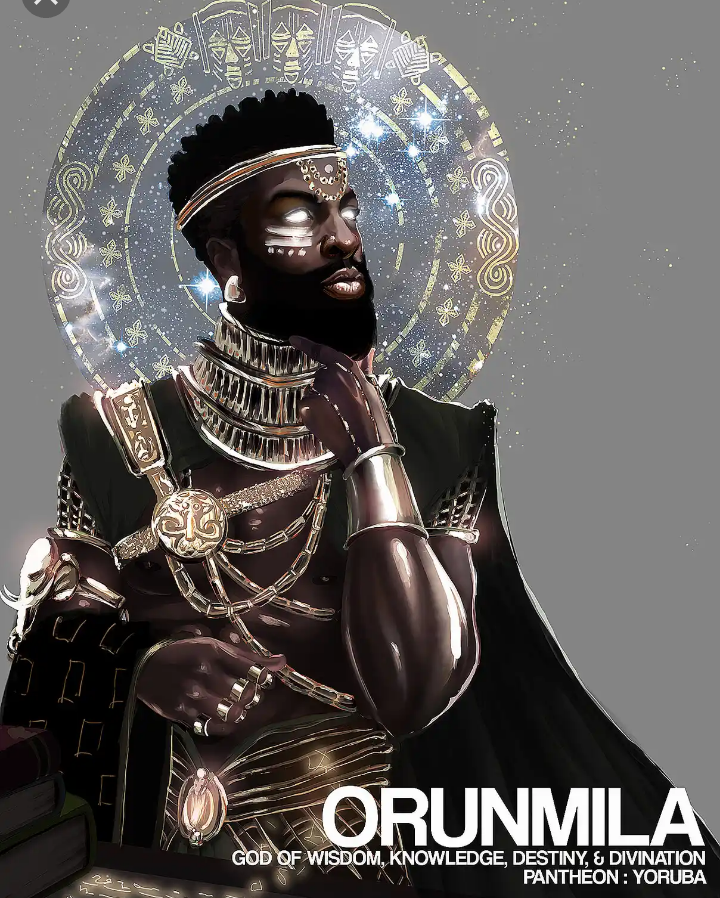 Orunmila is the god of wisdom, knowledge, and prophecy. it is largely believed that Orunmila was present during the creation of the universe. During his lifetime he taught spiritual knowledge to his disciple and now he has many followers who are following his way of life.

Orunmila is the god that brought Ifa to earth. His male followers who consult Ifa are called Babalawos while the females are called Iyansifas. His colors are green and brown and his symbol is divination(IFA). 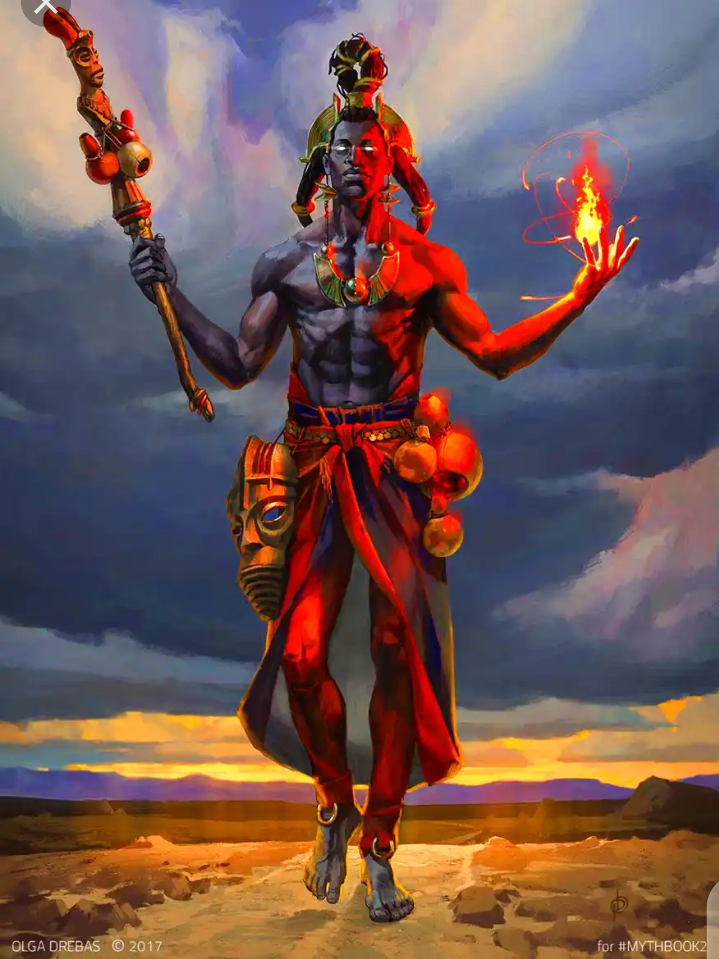 Esu is a trickster god. He represents protection, communication, and confusion. He is a divine messenger between Orishas and humans. Out of all the Orisa, you should look out for this guy because only a few have been able to escape his trick.

Esu is the god that creates problems for the innocent and his other names are Elejelu, Olulana, Onile Orita, Oba Odara, and Laalu Ogiri Oko among others. 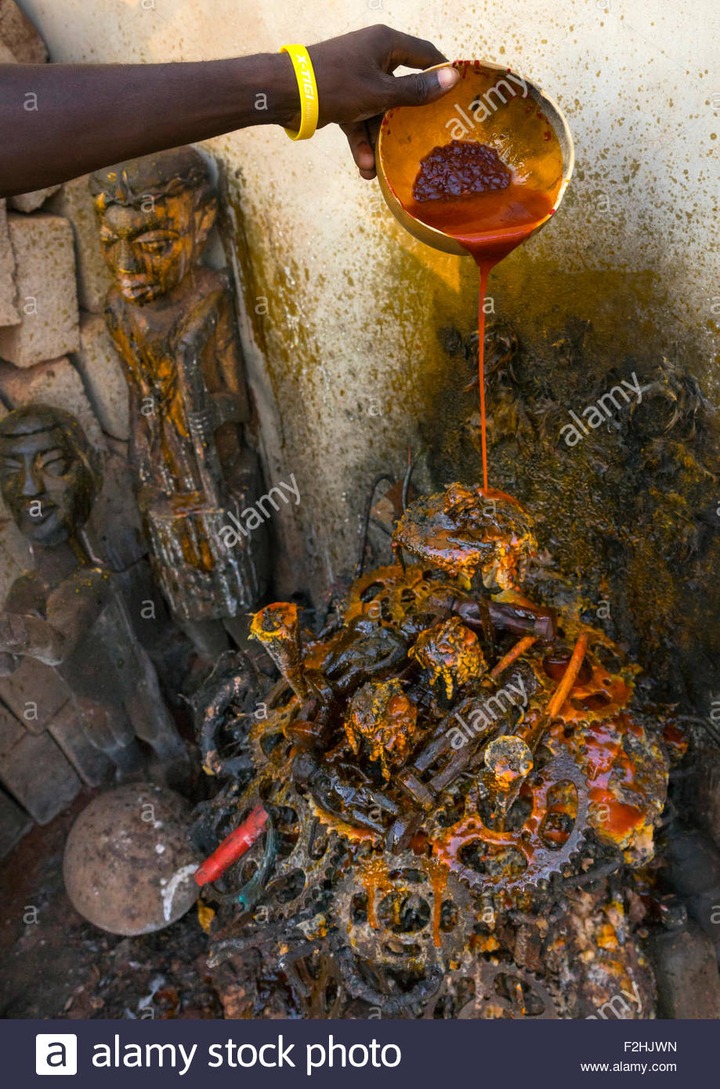 Ogun is the god of war. He was a warrior, hunter, and blacksmith. He became the Oni of Ife after the demise of Oduduwa. He was an aggressive and straight forward ruler. It is believed that Ogun is the Orisa that cleared the path for other gods to enter Earth.

Ogun has many followers and he is celebrated in Nigeria states like Ogun, Ekiti, Oyo, and Ondo state. Ogun is also worshipped in other countries like Cuba and Brazil.

His colors are Blue and White and his symbols are Palm fronds, Dog, and Iron. 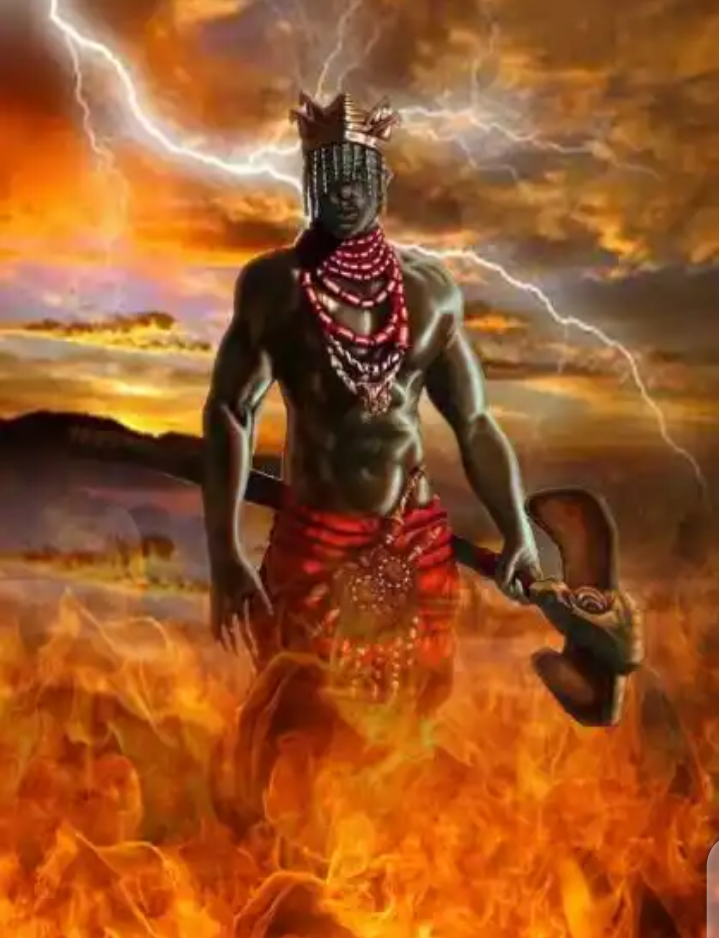 Sango is the god of Thunder and Lightning. He represents justice, fairness, and equity. He was the 3rd Alaafin of Oyo and he is known for his powerful axe.

Sango was a powerful and violent ruler who reigned for 7 years. His reign ended when he destroyed his place with lighting and fire. He had three wives which were Oba, Oya, and Osun. His colors are Red and White and his symbol is the double-headed Axe. 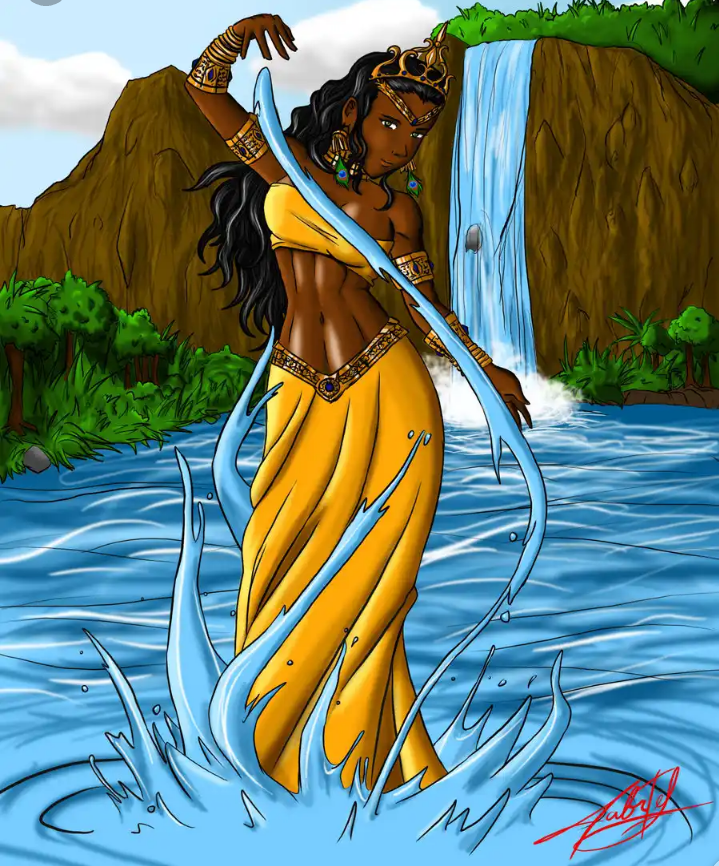 Osun is a river goddess. She represents beauty, love, fertility, femininity, and divinity. The source of Osun river is located at Ekiti state in Nigeria and the Sacred Grove is located in the city of Oshogbo.

she is the third wife of Sango and it was said that she is Sango's favorite. Osun is a very popular deity that is worship within Nigeria and other countries.

Her colors are White, Yellow, Gold, and sometimes coral and her symbols are flowing water, seashells, and amber bead. 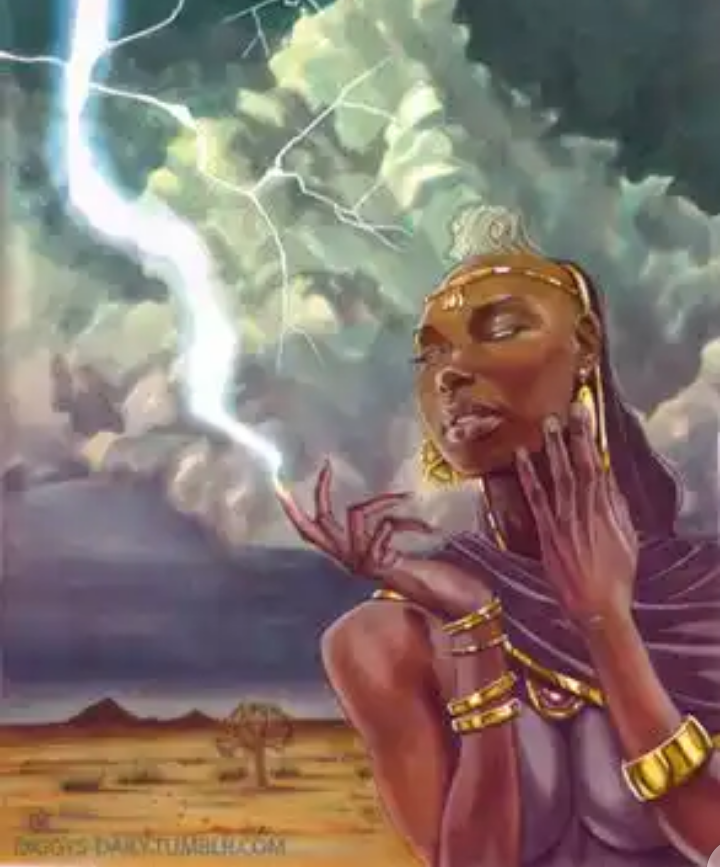 Oya is the goddess of the wind. she is also the goddess of lightning, violent storms, death, and rebirth. she represents devotion, perfection, and courage.

She is the second wife of Sango and she gave birth to 9 children. All of her nine children were stillborn. Her colors are Rainbow, Purple, and Brown and her symbols are water, fire, Buffalo, and Wind. 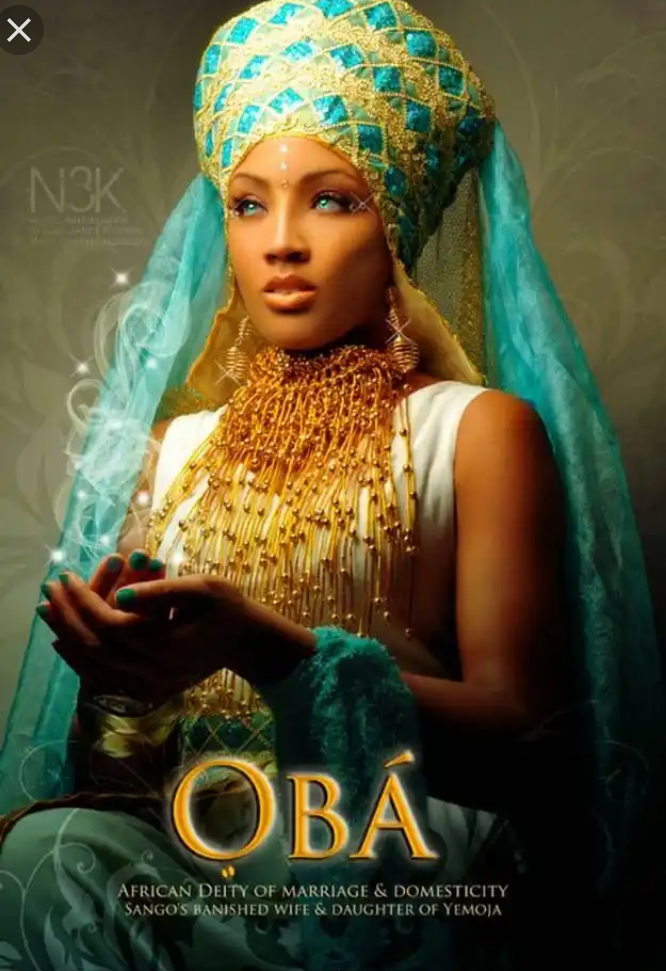 Oba is also a river goddess and she represents Protection, restoration, and flexibility. She is the first wife of Sango and the daughter of Yemaya, a river goddess.

She was tricked by her co-wife, Osun and Oya into cutting her ears and serve them as food for her husband, Sango to eat.

Her colors are Pink, Blue and White. Her symbols are Sword, Water Buffalo, lightning, and flywhisk. 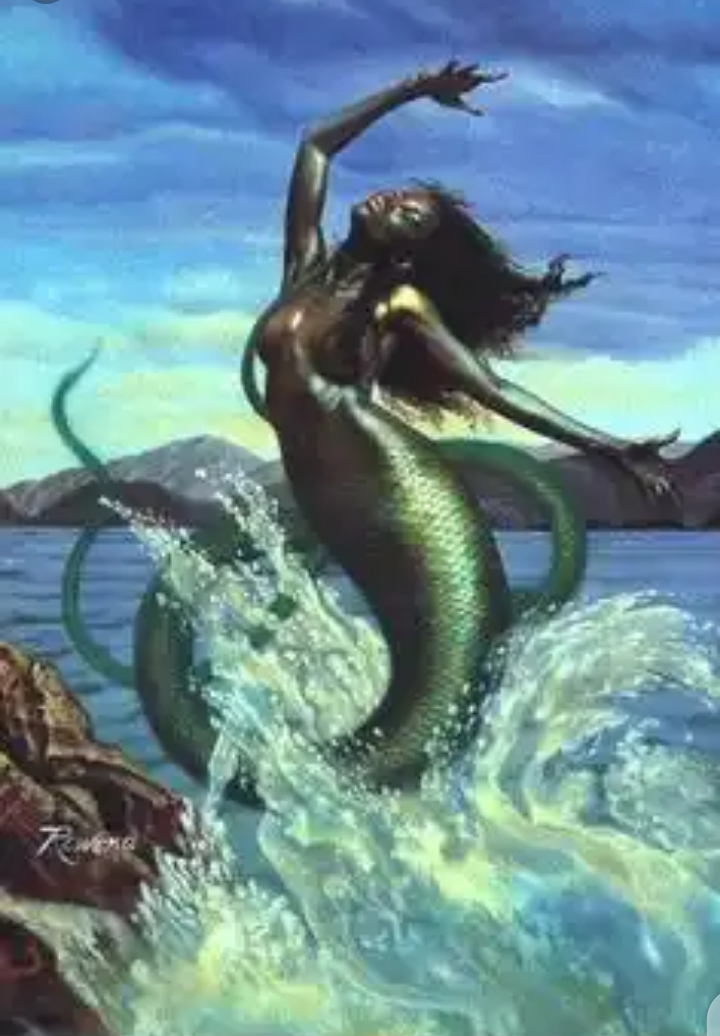 Yemaya is a very powerful goddess of the Ocean. She is a mermaid who represents peace, calmness, and comfort. A shortened version of her name is "Yey Omo Eja" which means Mother whose children are the fish.

She is the Orisa of the surface of the Ocean and she is referred to as the mother of all the gods. Those who worship her wear a blue bead necklace.

Yemaya is the other half of Olokun. Her colors are Sea Blue and White and her symbols are Pearls, Moon, Star, Cowrie shells, Water, and everything that comes from the sea. 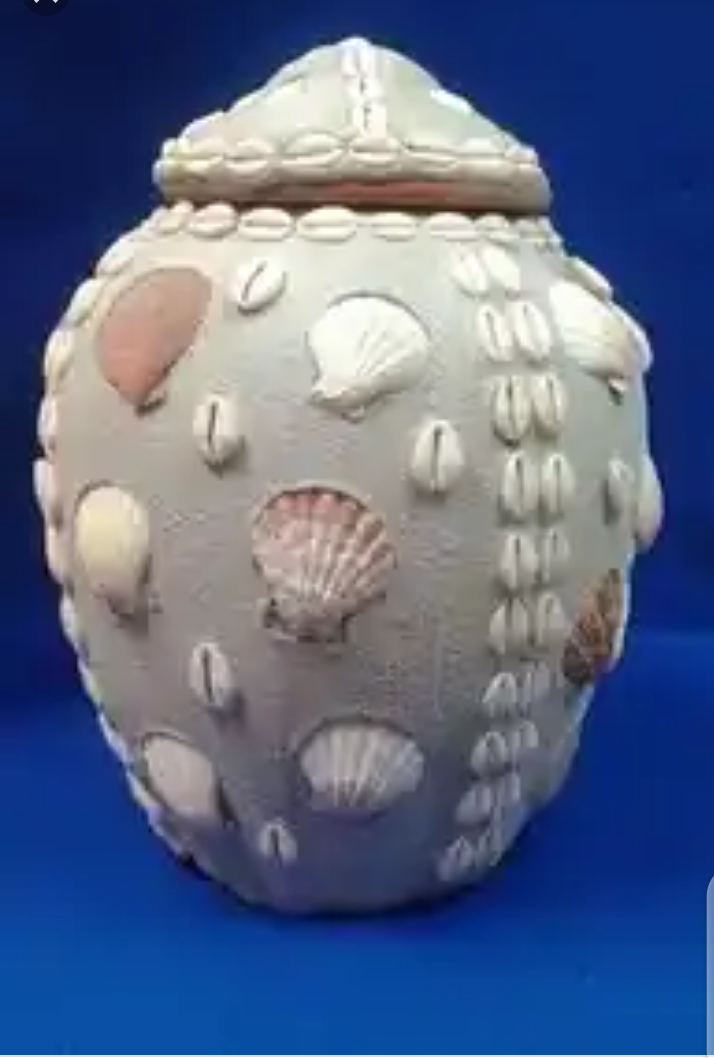 Olokun is a river goddess who has authority over all water bodies. She is the goddess of wealth and she represents endurance, patience, and wealth. Olokun is the parent of Aje, the Orisa of great wealth.

It is believed that Olokun has the ability to give her followers great wealth and greater economic benefit. She has a raging temper and works closely with Oya to create tremendous storms.

All the above-listed Orisa have walked among the living and they have kept the people in check. It is believed that the Yorubas has a total of 401 Orisa and Sango is the most feared among them all because he can cast thunder and lightning on anyone who offends him.

Content created and supplied by: Jumong1234 (via Opera News )