Cartaphilus: The wandering Jew who is cursed immortal till the second coming

By Everythingtalk (self media writer) | 1 year ago 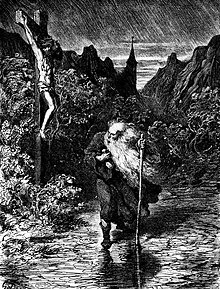 The Wandering Jew is a mythical or perhaps a lengendary immortal man whose legend began to spread in Europe in the 13th century. He was said to have taunted Jesus on the way to crucifixion and was cursed to walk the Earth until the second coming. Every hundred years the Jew returns to the age of 30. According to different variations of the tale, he was said to be a shoemaker or other tradesman, while other variants depicts him as the doorman at the estate of Pontius Pilate.

A variant of the wandering Jew is recorded in the Flores Historiarum by Roger of Wendover around the year 1228. An Armenian archbishop, then visiting England, was asked by the monks of St. Albans Abbey about the celebrated Joseph of Arimathea who has spoken to Jesus, and was reported to be still alive. The archbishop answered that he had himself seen such a man in Armenia, and that his name was Cartaphilus, a Jewish shoemaker, who, when Jesus stopped for a second to rest while carrying his cross, hit him, and told him "Go on quicker, Jesus! Go on quicker! Why dost thou loiter?", to which Jesus, "with a stern countenance", is said to have replied: "I shall stand and rest, but thou shalt go on till the last day". The Armenian bishop also reported that Cartaphilus had since converted to christianity and spent his wandering days proselytizing and leading a hermit's life. Also, a late 6th and early 7th century monk named Johannes Moschos records an important version of a Malchean figure. In his Leimonarion, Moschos recounts meeting a monk named Isidor who had purportedly met a Malchus-type of figure who struck Christ and is therefore punished to wander in eternal suffering and lament.

I saw an Ethiopian, clad in rags, who said to me, "You and I are condemned to the same punishment." I said to him, "who are you?" And the Ethiopian who had appeared to me replied, "I am he who struck on the cheek the creator of the universe, our lord Jesus Christ at the time of the passion. That is why", said Isidor, "I cannot stop weeping".

Content created and supplied by: Everythingtalk (via Opera News )