Reverend Father Ejike Mbaka has revealed the issues that were presented against him by the Authorities of the Enugu Catholic Diocese during the period that he was declared missing. He disclosed this to his parishioners at the Adoration ground in Umuchigbo Nike, Enugu hours after he was released by the Church Authorities. Recall that some hours ago, it was reported that the spiritual leader suddenly went missing. With the fear that he might have been arrested, thousands of people took to the streets of Enugu to stage a heavy protest demanding for his release.

However, he re-appears amidst the protest and he narrates what actually happened. Mbaka said that he was summoned by the Catholic Church Leadership, under Bishop Calistus Onaga. He said that many issues were presented against him during the supposed meeting but to his greatest surprise, they had already made up their minds before his arrival. He said the Church Authorities wanted to keep him for 30 days so that he can pray to God and meditate over his recent activities. 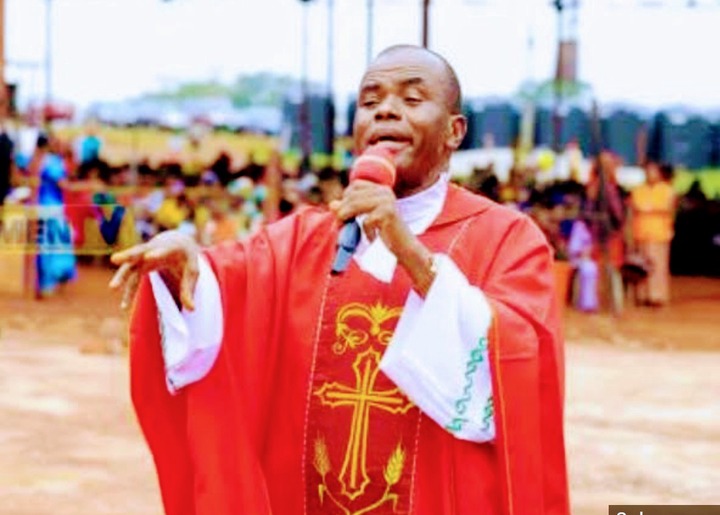 Mbaka said he begged them to give him the opportunity to at least come and address his followers (the parishioners) before they shut him down but they said no. “Allow me to go and celebrate mass for my people just for today, I won’t even tell that I am being punished, they said, no. I will just tell my members that I’m going for 30 days, we will come back and everybody will obey, they said, No. I also begged them to appoint another priest to come and celebrate mass for you today, they also said No. they did not treat me in a pastoral way. I was asking ‘am I being punished for what?...” –he says.

Mbaka says that the Church Authorities had already reached a conclusion on what they wanted to do with him before he even got to the Bishop’s house. Luckily for him, when people noticed that he had gone missing, they started a mass protest and this protest hit very hard that Bishop Onaga had to let him go.

Mbaka revealed that one of the major reasons why he was summoned was because he gave the leader of the Indigenous People of Biafra, IPOB, Nnamdi Kanu his blessing few days ago and condemned the Buhari-led administration. Mbaka said he told them that ‘Are you the owner of my mouth? You can’t tell me who to bless? If you are not happy that I blessed someone, you have your own mouth, you can curse the person. I cannot hate my brother because of some people who hatred is in their genes’- he says.