Do you know that the pope was once imprisoned in the year 1809.

In the late night of 1912,there occurred in Italy and France one of the great sacrileges in history.Pope pius vii who had been held a prisoner at savona by emperor Napoleon I since 1809 was cruelly dragged over the alps in precarious health,to Fontainebleau in france.The Pope arrived at the gate nearly a corpse. 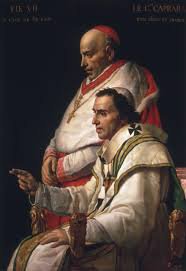 Shortly before the popes journey, Napoleon has written to Prince Borghese at Turin that precautions will be taken to see that pope Pius VII passes through chambery and Lyon at night.He also made sure that nowhere recognized.He made sure the Pope was dressed on a black cassock as a common priest and gave him a quack doctor.The pope was bundled into a carriage at deep night.He was already ill and his bowels were blocked and he couldn't urinate and the painful part was that it was worst when the horses galloped on with his serious agony.Delirious with fever, the pontiff cried out saying I will throw my self off and die if they forced him to go on.It was miraculously that the Pope reached Fontainebleau alive with his agony.Napoleon held the pope for 5 years and as if it wasn't enough,he also coveted the power as well.To that end he submitted the supreme pontiff to extraordinary humiliation.Here where the two powerful men at that time,one was the most powerful man and the other the vicar of heaven locked in a ferocious combat. In the cost if the combat,the pope excommunicated Napoleon from the faithful,obscene to the gaze of heaven man.

It was until may 24 1814 when the 5th Radetzky hussars of the allied forces freed the pope in a pursuit of Napoleonic forces. The Hungarian hussars escorted the pope back to Rome through the alps.Though it was a cold whether but one of the officer gave him his coat who was Janos Nepomuki.

For his gallantry Janos received the highest papal decoration,the supreme order of Christ and the pope gave the 5th Radetzky hussars a reward.

In February 1821 while Napoleon was exiled at st Helena's island,his health began to deteriorate rapidly.He reconciled with the Catholic church.He died.He died on 5th may 1821 after receiving the sacrament of confession,extreme unction and viaticum in the presence of father Ange Vignali.

It will also be interesting to know that Two popes were held captive, and their named are Pius,Pope Pius VII and Pope Pius Vi.Although Pope Pius VI died in France and wasn't released but Pope Pius VI was freed by Hungarian forces and lived.